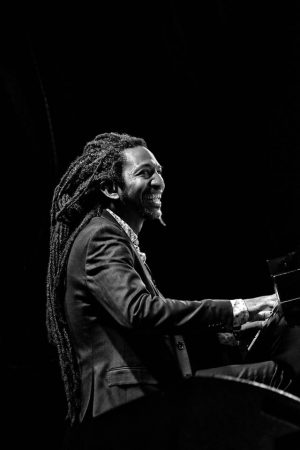 A few years ago, I had the pleasure of meeting Jack Zuff. Somehow, I had come across his photography, which he said was a “hobby.” Some hobby for those who have seen his photographs!

In the mission of JazzBuffalo, Jack Zuff has been a pivotal partner and contributor to JazzBuffalo. As the photograph above demonstrates, such photos can be quite powerful in not only building awareness and appreciation for jazz but also for chronicling special and even historic moments.

Recently, Jack has started a Facebook Page titled Music Photography in Black and White. Where he has been posting some incredible black and white photographs from the past three years he has been attending events and making memories. I would encourage you to look.

Here are a dozen favorites that only touch the surface of the many great photographs taken by Jack Zuff:

Capturing the great Benny Green at the Northwest Jazz Festival:

The superlative bassist Avery Sharp at the Northwest Jazz Festival.

The great Richie Cole at MusicalFare Theatre. May he R.I.P.

Drea d’Nur at the Nina Simone Tribute Concert at the Underground Railroad Museum in Niagara Falls.

The great Steve Turre at the Northwest Jazz Festival.

Carina and The Six String Preacher at the Screening Room.

There are so many more special moments captured by Jack Zuff. Let us all hope that we can one day soon be back making memories again.

If you have a favorite photograph from Jack, let us know in the comment section!