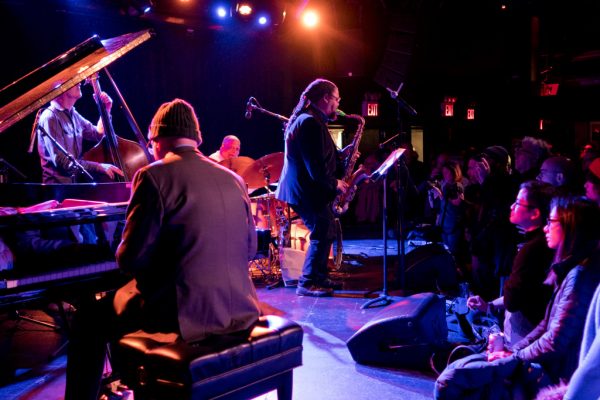 (Disclosure: JazzBuffalo is a proud inaugural member of the Jazz Coalition)

No matter how reopening is phased-in, the ability to perform before large audiences will be dependent upon the discovery of a therapeutic cure or a vaccine. With many jazz clubs in New York City and in other cities confined to elbow-to-elbow seating, prospects of live performing again look like twelve to eighteen months out. Often quoted as a best-case scenario. Worst-case is hard to grasp at the moment.

To help with this plight, Brice Rosenbloom spearheaded the creation of the Jazz Coalition Commission Fund. Rosenbloom, a concert promoter, knows a thing or two about jazz. He founded the NYC Winter Jazz Fest held annually in New York City, which attracts thousands each year. Along with the support of entertainment lawyer/artist manager Gail Boyd, and concert/festival promoter Danny Melnick of Absolutely Live Entertainment, the Jazz Coalition is launched to help jazz musicians to keep their art alive through commissioned funding.

Recipient jazz musicians will be commissioned to create new compositions reflective of our current times that will be featured on the Jazz Coalition website, social media messaging, and announcements. The coalition then intends for the music to live on post-COVID-19 and represent a chronicle of jazz music during the pandemic.

Rosenbloom states about the Jazz Coalition:

“With daunting uncertainty now within the live music industry and specifically in jazz. We realize the need to selflessly pivot and unite the jazz community in an immediate effort to commission musicians and nurture their creativity. These commissions will create a new canon of work reflecting our collective resilience.”

Today (Monday, May 11), NPR Morning Edition featured the Jazz Coalition and Brice Rosenbloom in their opening segment (the first 1:45 minutes):

Jazz musicians from across the country are showing their support by joining the Jazz Coalition. Among them are Branford Marsalis, Esperanza Spalding, Joe Lovano, John Scofield, Dee Dee Bridgewater, Diane Reeves, Greg Spero, Joshua Redman, and Terri Lyne Carrington. Some are going online to voice their support and help raise funding:

Although in the early stages, the Jazz Coalition will be awarding commissions in the near future and present the work of jazz artists through live streaming.

The Jazz Coalition is seeking donations from the general public representing jazz fans and audiences who would like to support this initiative. You can donate here: Jazz Coalition