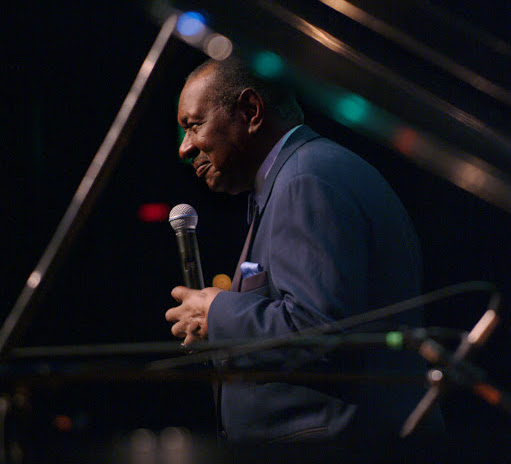 When I first learned of the passing of vocalist/pianist Freddy Cole on Sunday at the age of 88, this quote immediately popped into my head, as it did over the past nearly three decades whenever I saw Freddy’s name or heard him sing.  With Cole’s passing, the music world lost one of the very few remaining vocalists who perfectly straddled the world between the Great American Songbook and jazz. Billy Eckstine, Johnny Hartman, Arthur Prysock, Al Hibbler, and others could get directly to the heart of a song and convey its melody and meaning with a sense of gravity and deep swing – all without vocal histrionics or gimmickry. With Cole’s passing, only Tony Bennett remains from that golden era.

I’m sometimes asked how I got started producing jazz concerts in Western New York. I’ll skip some of the back story but not long after I moved back to Buffalo from New York City in 1989 I began knocking on the doors of various cultural institutions trying to get involved in jazz promotion. David Midland, then President of Artpark, offered me the job of launching a new jazz series at what would become Artpark At The Church and then re-launching the Artwork Jazz Festival.

Starting up a new venue is a tricky venture. Will people embrace the idea or will spotty attendance lead to its early demise?  I knew I needed to kick the series off with an artist whose name and music would have appeal beyond the core jazz audience – all on a limited budget.  Pre-internet, I spent a day at the downtown Buffalo Public Library with a legal pad, combing through a tall stack of back issues of the Village Voice. The Voice had the most complete listings of the various jazz venues in New York and my premise was that if someone had played in New York during the past year, they were alive and perhaps willing to fly up to Buffalo.

One name kept popping up in the ads for Bradley’s in Greenwich Village: Freddy Cole. His was a name I hadn’t seen while living in New York.  Bradley’s was the premier jazz piano club in New York. Nearly all the living greats played there – with many more jazz musicians lined up at the bar to listen to their peers.  One thing was for sure, if you were playing at Bradley’s, you were the real deal.

I was unaware at the time that Nat “King” Cole had a brother (he actually had several) who was a musician. At the time, Nat’s daughter Natalie was riding high on the charts with her Unforgettable album, her tribute to her father.  Booking Nat’s brother Freddy would certainly get attention, but only if Freddy could deliver the goods on the bandstand.

I called Bradley’s and asked to speak with someone who could give me the low-down on Freddy.  The bartender passed the phone to a gentleman with a distinct English accent who politely listened to my query and then replied, “Freddy Cole? He’s the tops, mate! The very tops!” That was all I needed to go ahead and book Freddy for our opening in March of 1992. Freddy sold out all three nights, the performances were wonderful, and Freddy proved without a doubt that even though his brother Nat cast a long shadow, Freddy could stand tall on his own. The Jazz At The Church series was off and running – jazz greats Johnny Griffin and Tommy Flanagan followed him in the first series – and from it, you can draw a direct line to the Art of Jazz series at the Albright-Knox and the current Art of Jazz at the Philharmonic series at Kleinhans.

Freddy would return to Western New York in the ensuing years.  You might call him a “fan favorite” but I believe that moniker would apply to Freddy wherever he performed.  If you liked music, you had to like Freddy. To paraphrase the critic Charles Shaar Murray, if you were too hip for Freddy Cole, I guess you were just too hip.

Beyond his vocal work – certainly reminiscent of his brother but also his contemporary Tony Bennett (Freddy was first offered the chance to record Bennett’s early hit “Boulevard of Broken Dreams”) – Freddy’s piano playing added another dimension to his sound.  At Artpark At The Church I mentioned to Freddy that his use of block chords reminded me of Red Garland. He replied, “Red! That’s my man!”

At the time I booked Freddy at Artpark, Cole’s early recordings were impossible to find and he had just one current CD on a small independent label in Europe.  Eventually noted producer Todd Barkan took the helm and over a series of fourteen excellent albums on Concord, Telarc, and High Note firmly established Freddy as an artist in his own right. Freddy aged like fine cognac and before the pandemic hit he was still performing, playing concerts around the world along with his annual two-week stint at Birdland in New York.

In a review that proved to be pivotal in Cole’s career, the critic Ben Ratliff wrote in the New York Times, “Freddy has an impeccable sense of swing… he is, overall, the most maturely expressive male jazz singer of his generation, if not the best alive.” Freddy is no longer with us, but the music he left behind will stand as a monument to a humble man who defined the word “class”.  It’s a common cliche to picture a recently departed musician up in heaven jamming with his contemporaries.  In Freddy’s case, I’m letting myself imagine he and brother Nat sitting at a grand piano trading songs and putting mile-wide smiles on all in earshot.

(Bruce Eaton is a life-long fan and advocate of jazz, founder and producer of the long-running Art of Jazz Series, contributing writer for the Buffalo Spree, and a contributing author to JazzBuffalo.)