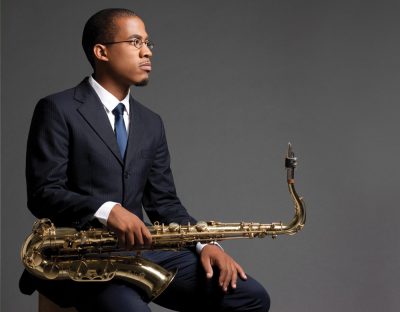 James Brandon Lewis, since leaving his hometown of Buffalo, has risen in the jazz world as an emerging saxophonist of note. Lewis is usually noted for his ability to reach into the past of influences by Sonny Rollins, John Coltrane, and Ornette Coleman while crafting a unique improvisational sound that is modern and futuristic.

In the 2020 68th Annual Downbeat Critic’s Poll, the pool of voting critics named James Brandon Lewis the winner of the Rising Star – Tenor Saxophonist category. Lewis can most likely attest that nothing comes easy in jazz. Especially in these hard times brought on by the coronavirus pandemic. Receiving the most votes is a certain recognition by critics of the dynamic saxophonist’s honing of his craft and producing of acclaimed recent albums.

James Brandon Lewis was born in Buffalo in 1983. Heavily influenced by church and gospel music, he developed a passion for jazz. Lewis studied with saxophonist Carol McLaughlin, a mentoring fixture for many years here in the community of jazz musicians residing in Buffalo. He began to develop his nascent musicianship while attending the Buffalo Academy for the Visual and Performing Arts. Upon graduation in 2001, Lewis went on to Howard University and studied under the guidance of Charles Young.

After a short stint of concentration in gospel music, the pull of jazz found Lewis at CalArts studying under the likes of Charles Haden and Alphonso Johnson. Earning a Masters in Fine Arts Degree in 2010. Eventually, the mecca of jazz, New York City, became home for Lewis in 2012.

Beginning with his debut album 2010, Moments, Lewis has produced a string of impressive albums. Characterized by a fiery and explosive style that echoes the influence of Coltrane. Through the recordings and performances, James Brandon Lewis now enters his winding road of jazz as a critically acclaimed saxophonist, composer, and arranger. His latest album is, Live In Willisau, released this year.

This is a well-deserved recognition for the hard-working jazz artist. Who has taken each step in his journey rooted in the influences of where it all began, in Buffalo. Congratulations to James Brandon Lewis.