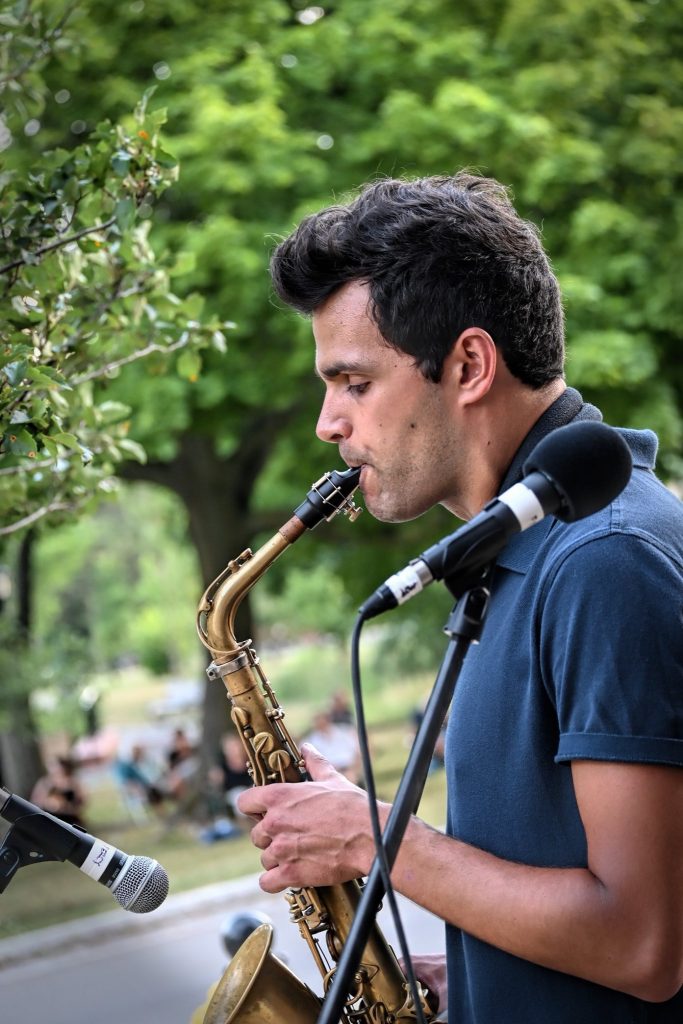 For more information on the series itself and the particulars, you can read the article: A Picturesque Start To The Hotel Henry Summer Jazz Series

So far, we experienced two fabulous Fridays that featured The Savoy Trio with Tim Clarke, George Kane, and Paul Zapalowski and The Elliot Scozzaro Trio with George Caldwell and Joe Goehle. The remainder of July and August will see the series offer a decidedly international flavor of jazz that just seems to fit the ambiance of the historic location. We will hear the music of Texas Swing and jazz standards from The Skiffle Minstrels Trio, Wes Montgomery/George Benson style from jazz guitarist Dale Toliver, Brazilian Bossa Nova from Saranaide, French accordion jazz from the French Conéxion, gypsy jazz from The Paper Roses, and straight-ahead jazz from the Jay/Sharp-tet.

The series will also include a special engagement appearance by the internationally renowned jazz guitarist and composer Charlie Ballantine. Ballantine will be joined by the world-renowned jazz saxophonist Rob Dixon.

We hope to continue the series outdoors into September and maybe even October. All predicated on where we are as a community pandemic wise by the end of August. Additionally, please support this series and other series by contributing to the Keep Local Live Jazz Alive Fund. See more at the end of this article.

What follows is the scheduled performances for July and August. Be sure to click “Find Out More” for details on each performance scheduled.

The award-winning and popular Western Swing band The Skiffle Minstrels have entertained the WNY region for the past decade with their unique focus on Texas Swing Jazz Music.  Equally unique is the trio version of this popular group with a loyal fan base.  The Skiffle Minstrel Trio consists of Dave Mussen on Guitar and Clarinet, Chris Jones on Fiddle and Guitar, and Paul Todaro on Upright Bass and vocals.  They perform Western Swing classics and jazz standards in a light,…

Dale Toliver is an instrumental jazz guitarist influenced by the style of Wes Montgomery and George Benson while developing his own unique sound.  “The Dale Toliver Band” has become of the most sought-after sounds in the region and in several states outside of New York.  Dale will be joined by Al Ferguson, one of the region’s top jazz organists and keyboardists for the past twenty years.  Toliver will present an evening of music paying tribute to the style of Wes…

One of the biggest nights ever at the popular Hotel Henry Jazz Concert Series was that Saranaide’s “So Brasil Bossa Nova” performed before a wildly enthusiastic sold-out audience of 250 people.  We are bringing it back for a special evening at the Hotel Henry Summer Jazz Series! Saranaide is an accomplished vocalist, songwriter, and musician based out of Buffalo, NY.  With parents from Panama and Puerto Rico, Saranaide has dipped into her DNA to embrace and celebrate the pulses and…

French ConéXion is an ensemble with a truly international background featuring Jeremy Spindler (France, Brazil), accordion, Marc Cousins (France, Belgium), double bass, and Bernard Kunz (Switzerland), guitar, oud. French ConéXion was formed in the summer of 2016 with the intention of creating high-quality music in a jazz format where musicians are able to take a composition and create a unique and new version at every performance. Inspiration for their unique sound comes from the music of French accordion great Richard…

The Paper Roses are a hot-jazz and Django Reinhardt style inspired group based out of Western NY. Playing original songs and interpreting classic guitar swing sounds in a contemporary way. The group features Sean McNamara on lead guitar, Tyler Westcott on rhythm guitar and vocals, Patrick Jackson on bass, and Brendan Gosson on violin. You can expect the Paper Roses to play an eclectic mix of standards from the Hot Club repertoire, inspired originals, blazing instrumentals, and a few curveballs…

The Jay/Sharp-tet enjoys performing a collection of original compositions and arrangements of jazz standards around the Western New York area. Past performances include the Queen City Jazz Festival, the Northwest Jazz Festival, the Nietzsche’s Jazz Festival, Babeville’s 9th Ward, and at Pausa Art House. Inspired by ensembles such as the great Miles Davis Quintets they strive to approach every tune with a unique interpretation. Jacob Jay is a graduate of SUNY Buffalo State, where he received a Bachelor of Music…

To support this series and other local series JazzBuffalo is presenting, we are making available the ability to contribute to the Keep Local Jazz Alive Fund.  The fund will help cover the costs of the free summer outdoor live jazz presented during the COVID-19 pandemic.  Costs include sound, rental, and pay to the musicians. Please consider donating a suggested amount of $5 per person, for each series event you attend and only if you can, to help us make local live jazz possible.  You can contribute via PayPal or Venmo: