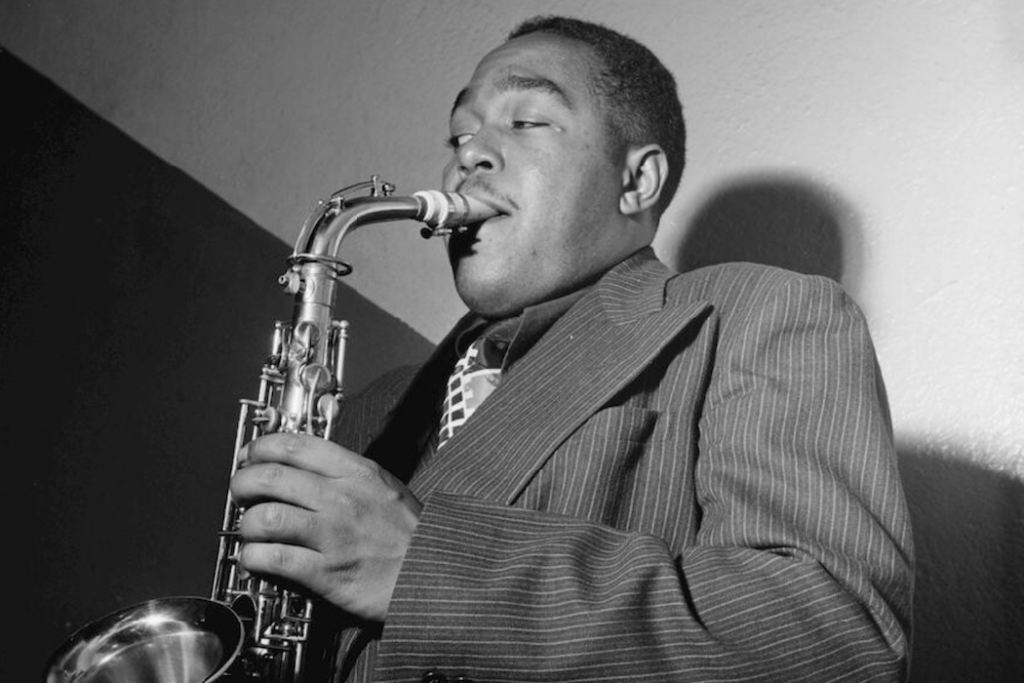 On Saturday, August 29, the jazz world celebrates the 100th birth date of Charlie “Bird” Parker. The 100th centennial is no ordinary celebration. Parker is a revered figure whose short-lived life carved a lasting stone of innovation in music. His impact continues to influence venerable and budding jazz artists alike more than sixty-five years after his death in March of 1955 at the age of 35.

(How did Charlie Parker get the nickname “Bird.” Legend has it that Charlie Parker was given the nickname “Yardbird” by his fellow musicians when a chicken (in the middle of the road) was run over and killed while on a tour bus. Parker stopped the bus and picked up the dead bird. He proceeded to pluck and cook the chicken for dinner. Eventually, “Yardbird” was shortened to “Bird.”)

Parker is largely credited with innovating the sound and style of jazz known as bebop. Bebop revolutionized jazz. Until Parker came along, jazz was primarily dancing music featuring big bands. Its celebrities the bandleaders themselves such as Tommy Dorsey, Benny Goodman, and Glenn Miller.

Yearning to explore beyond the confines of big bands, Parker and his contemporaries sought out smaller ensembles of trios, quartets, and quintets to master improvisations and shift the focus to uncharted solos. Mastering solos meant mastering speed as well.

In several interviews before his death, Charlie Parker points to the song Cherokee as one that ignited his newly found style of playing solos on his alto saxophone. The song enabled him to launch into the fast-tempo he had in mind. Here is a 1942 recording that is emblematic of Bird’s revolutionary soloing and phrasing.

Most, unfortunately, due to a strike by the American Federation of Musicians over a dispute on royalties, very few recordings of Parker in this period from 1942 to 1944 exists. By 1945, he found collaborators such as Dizzy Gillespie and Max Roach and they began recording music that came to be known as bebop.

One of the game-changing tunes recorded was Charlie Parker’s Ko-Ko. Interestingly, the song is based on Cherokee, and Parker explores soloing as a form making up the bulk of the entire song. In this version, you hear the incredible innovation of Charlie Parker accompanied by a rare time Dizzy Gillespie is on piano, Miles Davis on trumpet, Curly Russell on bass, and Max Roach on drums:

The collaboration between Charlie Parker and Dizzy Gillespie led to some of the first original recordings of bebop. These included the well-known historic bebop song Groovin’ High and perhaps not as well known, the Tadd Dameron song Hot House. In this 1951 film, we see and hear Parker performing Hot House with Dizzy Gillespie:

In November of 1945, Parker led a session at Savoy Records (Wor Studios in New York City) that became a historic chronicling of some of the most influential songs in jazz history. Including Ko-Ko as well as Billie’s Bounce, Anthropology, and Now’s The Time. Here is a live version of Anthropology, which is based on the song I Got Rhythm:

In the next decade, from 1945 to 1955, Charlie “Bird” Parker established himself as one of the great pioneers of jazz and American Music. His fabled story is both heroic and tragic. Beset by mental and drug addiction problems, he still blazed a trail like no other. Most notably, the transformative tune Ornithology recorded in 1946, the 1950 recording of Charlie Parker with Strings and Jazz at Massey Hall in 1953.

There is much more that can be written about Charlie “Bird” Parker. And, much to be found that has already been written. One fact that cannot be overstated is Parker’s influence on how jazz is defined and performed even today.

Two recommended books that illuminate the life and times of Charlie “Bird” Parker based on scholarly research yet provide a storytelling narrative are:

BIRD – The Life and Music of Charlie Parker by Chuck Haddix

One fact remains that cannot be overstated. Charlie Parker’s influence on how jazz is defined and performed continues. His lasting impact and legacy have not waned in more than 65 years.

(On Saturday, August 29th, JazzBuffalo will host a Charlie “Bird” Parker 100th Birthday Celebration featuring jazz artist extraordinaire Dave Schiavone. The award-winning saxophonist will lead a program devoted to the music of Charlie “Bird” Parker. Schiavone will perform a selection of some of the most famous Parker compositions. The quartet will include George Kane on guitar, Wayne Moose on bass, and Tom Kasperek on drums. The program is part of the Hotel Henry Summer Jazz Series and is scheduled to begin at 6:30 pm.)