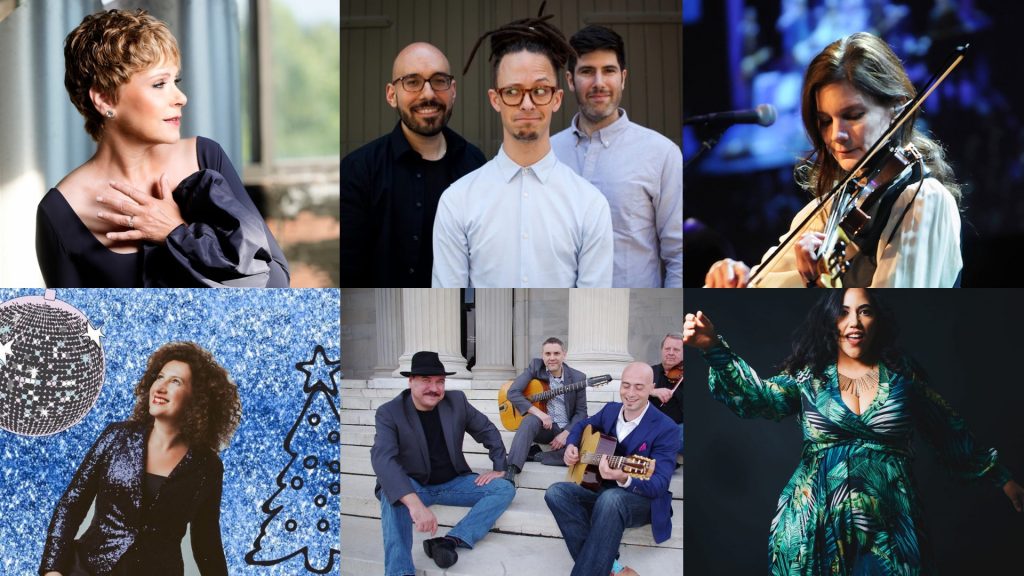 JazzBuffalo and MusicalFare Theatre are teaming up once again to help provide an alternative way to enjoy jazz.  The launch of “Live From Premier Cabaret Lounge” is a new live streaming jazz concert series filmed in high-quality video and streamed to the region’s jazz listeners and beyond.  The series will film live from the Premier Cabaret Lounge located at MusicalFare Theatre.  No audience will be present due to COVID-19. However, the audience will consist of many interested households in the region, Canada, New York City, and beyond.  The concerts will be captured live with the use of four HD cameras, audiophile sound, and six acclaimed jazz artists from the region and New York City.  Concerts will be broadcasting each 1st and 3rd Friday of the month starting October 2 and ending December 18.  To make the live-streamed concerts accessible to many, the ticket price will be $10 per household (plus $3 facility fee) and the link you receive will allow for viewing for two full weeks after the live presentation in case you’re not available on live-stream night.  (The December 18 New York City Holiday Swing Show will be a special fundraiser at $20 plus $3 facility fee.)

“We are in unprecedented and hard times,” says Tony Zambito of JazzBuffalo.  “With cooler weather returning Randy Kramer and I wanted to put together an alternative series that will give people the chance to enjoy jazz from their living rooms.  Especially those who are just not ready yet to go indoors even with safety and distancing measures in place due to the coronavirus pandemic.  We are excited about the jazz artists we have lined up. And, we hope to make this an effort that engages the community in helping us to keep jazz and the arts alive.”

The lineup of performing jazz artists include regional favorites and two from New York City.  Each representative of the quality experienced previously at the Premier Cabaret Lounge.  Scheduled to perform are (links to additional descriptions at JazzBuffalo.org are provided):

Hot Club of Buffalo: The Hot Club of Buffalo is the region’s premier Gypsy Jazz Band.  The band pays homage to the music of Gypsy Jazz greats Guitarist Django Reinhardt and Violinist Stephane Grappelli with influences from artists like Bach, Jimi Hendrix, and Steely Dan and rhythms from styles like Bossa Nova, Choro, and Rhumba.

Colleen Williams Quartet: Colleen Williams has been one of the area’s most prominent jazz vocalists.  She has been featured with the Buffalo Philharmonic Orchestra as well as, the Virginia Symphony in tribute shows to Benny Goodman, Artie Shaw, George Gershwin, and The American Songbook.  Williams will be joined by jazz pianist Bobby Jones, plus Jerry Livingston and Preston Brown.

Saranaide “So Brasil Bossa Nova”: Saranaide is an accomplished vocalist, songwriter, and musician based out of Buffalo, NY.  With parents from Panama and Puerto Rico, Saranaide has dipped into her DNA to embrace and celebrate the pulses and sounds of Latin America; exploding on the Buffalo Jazz Scene with new vigor.  Inspired by the legends of soul and jazz riding on the rhythms of the world, Saranaide’s unique sound is sweet honey dripping over a spicy stew.

Philippe Lemm Trio: The internationally acclaimed Philippe Lemm Trio is continually proving to be one of the most exciting and electrifying jazz trio’s around today. Led at the helm by drummer Philippe Lemm, the group met in New York in 2011, and after one session together, realized that their undeniable chemistry was one that needed to be taken and shared with the world.  The trio’s electrifying chemistry and creative re-imagination of standards, progressive rock/pop, and diversely influenced music have thrilled audiences at Blue Note (New York), North Sea Jazz Festival, Pori Jazz Festival, Bimhuis (Amsterdam), Getxo Festival (Bilbao), Rockwood Music Hall (New York), Lofta (Vilnus) Tivoli (Utrecht, and Blue Frog (Mumbai).  and many other locales.  The Philippe Lemm Trio consists of Philippe Lemm – drums, Angelo Di Loreto – piano, and Jeff Koch – bass.

Svetlana New York Holiday Swing: Svetlana & The New York Collective is one of New York’s most beloved swing bands known for their signature vintage-inspired sound, foot-stomping groove, and exciting stage presence. Svetlana and her band have released the chart-topping Night at the Movies (debuted #1 on the US Billboard Traditional Jazz Album Charts / #2 on Jazz Album Charts) in 2019 and have headlined sold-out shows in premier US venues and abroad.  “Prepare to swing and be moved!” (JazzLives) as Svetlana delivers her distinct brand of the “sweet and naughty” (JazzLives) holiday magic in this special New York Holiday Swing show featuring the beloved holiday classics as well as charismatic “feel good” originals by Svetlana and jazz arrangements of cheer-inducing modern pop and rock standards.

Each concert will begin at 7:30 pm via a link emailed to digital pass holders earlier in the evening of the show.  Preceding each concert at 7:15 pm, Tony Zambito of JazzBuffalo will host a “Get To Know The Artist” interview with the evening’s artist.

For more information and to purchase a digital pass, you can visit JazzBuffalo.org or visit MusicalFare Theatre’s live stream page at https://musicalfare.com/live-streams/