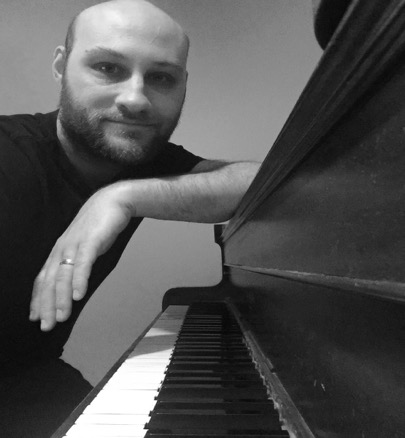 I can recall the exact moment I exclaimed in my head that Andrew Nixon was a truly gifted pianist. He was performing McCoy Tyner’s song, Passion Dance. If you are familiar with the song from the classic Tyner album, The Real McCoy, it is filled with intricate complexities requiring it to be played with plenty of passion. Played he did and his performance was enrapturing.

If you are not familiar with Andrew Nixon, then you should take notice of his debut album, IN CONGRUENCE. The album is scheduled for release on February 1, 2021, and is available for pre-order now.

Andrew Nixon resides in Buffalo, NY, and has spent the last couple of years working on original compositions. He earned a master’s degree in music theory from the University of Buffalo in 2012. Since then, he has led various groups performing at the CMC Jazz Festival, Queen City Jazz Festival, and Northwest Jazz Festival.

Nixon is a former student of the great pianist and educator Paul Hofmann. Here is how Hofmann, from the Eastman School of Music, sums up Nixon in the album’s liner notes:

I have taught and performed in Rochester, New York for decades, and over these years I have been privileged to work with a handful of gifted young jazz pianists and composers from just down the road in Buffalo. Andrew Nixon is one such special talent. Though still a young man, Andrew has achieved a beautifully unique writing and playing style – both of which are clearly demonstrated throughout IN CONGRUENCE…

The debut trio album consists of all original music compositions by Andrew. Featured along with Andrew are Ed Croft on bass and Joe Goretti on drums as they form the Nixon, Croft, and Goretti Trio.

I caught up with Andrew Nixon for a brief interview:

TZ: How did the concept for the new album originate?

AN: The 3 of us have been playing gigs together for several years.  We feel like we have great chemistry and wanted to do some recording.  The standard jazz repertoire has been recorded so well and in so many different ways that we felt it best to explore original material.

TZ: Who performs on the album and what makes them special?

AN: The album features me on piano, Ed Croft on bass, and Joe Goretti on drums. Ed Croft has a wonderful feel for both melody (as a soloist) and counter-melody (as an accompanist) that go along with his solid time feel.  Joe Goretti is a mature drummer with a great sense of form and dynamics.  His clarity and sensitivity enhance each track.

I am especially fond of how Paul Hofmann characterized them in the liner notes:

“a wonderful debut trio recording featuring two superb sidemen and where all the compositions are Nixon’s...Each member of the trio has their own unique take on things, and the result is marvelous.” (From the liner notes by Paul Hofmann)

TZ: How do you characterize the album and the music?

The style is mostly straight-ahead jazz, with some classical and other influences mixed in.  Hopefully, it’s organized in such a way that it tells a unique story.

TZ: What can you tell us about one of the originals on the album?

AN: I think of composition as code-breaking.  I think of it not as “starting from scratch” but as looking for something that has been there all along, buried in an ocean of information.

My job as a composer is to find just the right pathways to illuminate it.  As a jazz musician, I tend to value the natural sounds one gets from free improvisation, and I love music that retains this quality even if it is not improvised. The music on this album reflects this general philosophy.  When composing I typically do not pre-plan much, relying instead on inspiration in the moment.  When writing 7-8-9 I first chose an unusual form made up of 3 sections: The first 7 bars, the second 8 bars, and the third 9 bars.  As a sort of compositional game, I then set out to make the end result sound “natural.”

(Here is Paul Hofmann’s description in the liner notes: “7-8-9 is such a fun, relaxed piece! Aptly named for the measure lengths of its three sections, each time through the form the middle 8 bars (heard ‘in 3’) are played more quickly than their surrounding sections (‘in 4’) yet all sounds perfectly juxtaposed. After two initial statements of the melody, each of the three musicians plays interesting and swinging solos before a single restatement of Andrew’s opening theme. Something about “7-8-9” seems ingenious, though I’m not sure exactly what? Bravo.”)

TZ: Who are some of your influences?

AN: The list is of course long.  Here are some:

TZ: Where can people get access to the music or order a CD?

I, in particular, enjoyed Ruby’s Waltz. Andrew performs this song in the style reminiscent of the late Bill Evans. A subtle yet entrancing mode of playing the piano that makes listening reflective and enjoyable. Take a view and listen to this video:

Once again, let’s hear Paul Hofmann’s take from the liner notes, where we are echoing each other about Nixon being in some ways reminiscent of Bill Evans:

The beautiful “Ruby’s Waltz” is reminiscent of the brilliant original waltzes of Bill Evans, featuring an interesting AABAC form with an added twist: The trio creatively truncates Andrew’s two 12-bar B melody sections by 4 bars during the piano and bass improvisations, thus matching the other 8-bar phrase lengths. Sensitive drumming from Joe is another highlight throughout.

All three musicians, Andrew Nixon, Ed Croft, and Joe Goretti have made immeasurable contributions to the jazz scene in Buffalo. Ed Croft and Joe Goretti performing in multiple genres and group settings.

Jazz trios and especially jazz piano trios have a way of forcing things. In a good way. They force the three musicians to focus on artistry as well as improvisation at a heightened level. For the listener, it forces you to soak-in what is happening at the moment. Marveling at how fulfilling music is emanating from just three musicians.

Nixon, Croft, and Goretti pull this off in this debut album, IN CONGRUENCE.

The album is scheduled for release on February 1, 2021.

Credits for the album: