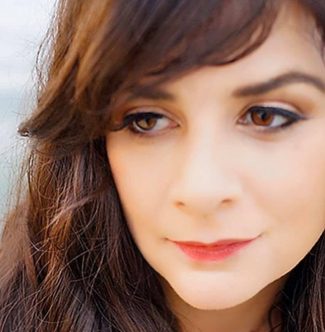 I first met Suzanne Fatta a few years ago over coffee.  We discussed our mutual interest in all things Italian and Sicilian as we shared family backgrounds.  And our favorite foods.  Eventually getting to the topics of jazz and our love for music.  Why we were meeting in the first place.  As many Italian descendent know, talking about family and food is usually what comes first!

Suzanne Fatta is known internationally as, Carmina Suzanne Curve Model.  She has devoted her professional modeling career in Buffalo, NYC, London, and Paris to supporting mental health, physical health, and self-esteem through her own advocacy for more than ten years.  I had learned that she was an ardent national advocate for models who suffer from invisible disabilities.  Such as she does.  Fatta has multiple sclerosis and works tirelessly to overcome limitations to pursue modeling.

It has not stopped her love to pursue her passion for opera and jazz vocals.  She serves as managing director for Nickel City Opera, founder of the all-female choral group The Women of Vivaldi, and is tenor for the collective Sotto Voce Vocal Collective.

Suzanne served as emcee and Honorary Hostess for the JazzBuffalo International Jazz Day Celebration and Fundraiser held at Pausa Art House back in April of 2017.  Putting in a long day introducing bands and helping JazzBuffalo to raise over $1000 that was donated to the Multiple Sclerosis Association of America and the MS Walk held here locally in Buffalo.  A remarkable day helped by a remarkable hostess.

The pandemic is bringing to light the need for supporting strong mental health.  One area of mental health close to Fatta’s heart is how much body image, self-esteem, and body-love affect mental well-being.  Especially when there is bullying or body-shaming involved.  Suzanne is a member of BodyLove By Silvana Denker, an international anti-bullying campaign that celebrates bodies of all shapes, sizes, colors, ability levels, ages, and more. BodyLove shines a light on those with disabilities, scars, burn marks, and tattoos.

In 2016, BodyLove By Silvana Denker made their presence felt at New York Fashion Week by staging a demonstration at Times Square.  Demanding more diversity on the runways of modeling.  The message was heard.  This year, they are being heard once again at Times Square.  A prominent Times Square Billboard features the BodyLove campaign.

Featured in one of the photos on the billboard highlighting the campaign is Buffalo resident Suzanne Fatta.  Including the Famous Metallic Curves and Paint Drop series. Silvana (a model, photographer, and activist) is based in Germany.   Silvana has taken the BodyLove campaign to nearly 40 cities across Europe and North America.  Including Niagara Falls.

Suzanne had planned to see the billboard in person.  However, it went up the week she had hospital treatment for her multiple sclerosis.  Luckily her friends and family raced to Midtown to capture photos and videos. “Someone really loves you if they’re willing to head into Midtown for you!” says Suzanne. “We’re so lucky that even though we could not see it in person, we have lots of visual memories. For a model that’s one of the very top things you to check off your list.”

It is not every day that a Buffalo resident appears on a Time Square billboard.  In this case, to help deliver an important public message affecting people’s lives.  Such a message is what motivates Suzanne Fatta in her modeling role as Carmina and as an activist.  “I have experienced first-hand for the past decade how seeing yourself represented in the fashion industry can heal hearts and minds,” says Fatta.

Thanks to Buffalo resident Suzanne and her peers, this important message was displayed prominently in the mecca of all billboard displays.