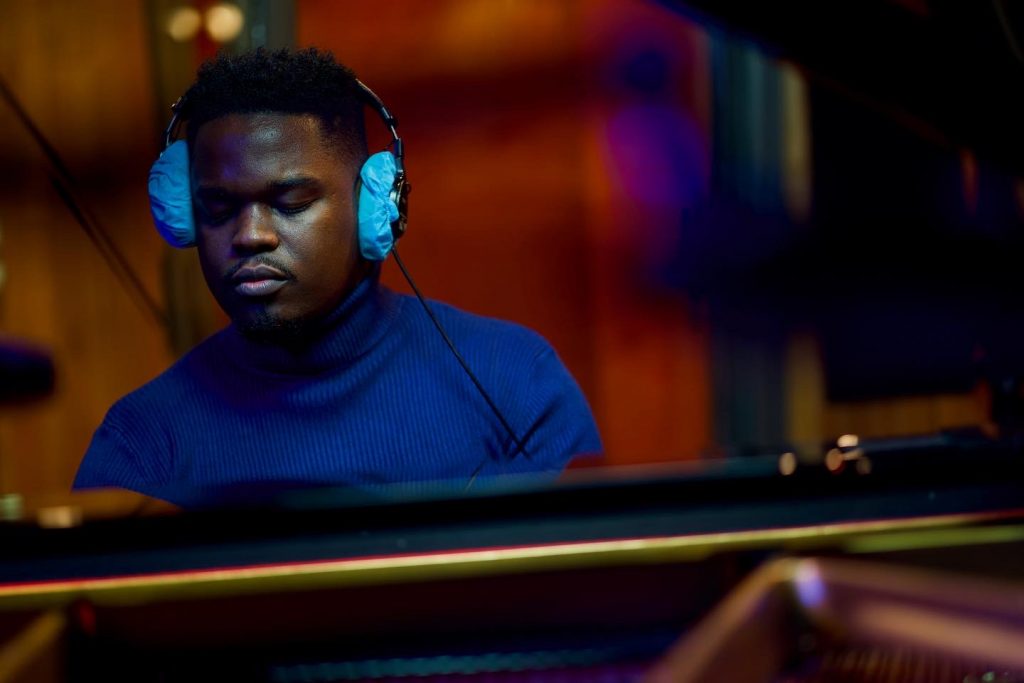 A development that is increasingly evident is the emergence of the next generation of jazz artists residing in Buffalo.  It harkens back to other periods in the city’s history of jazz.  From the Big Band era to the pivotal 1950s and 1960s.  A period from the mid-1970s to the early 1980s is often fondly remembered.  We are in such a period now.

One next-generation jazz artist elevating the art of jazz in Buffalo is the jazz and classical pianist Marcus Lolo.  The first time I went to see Marcus was at his introductory performance at Pausa Art House nearly three years ago.  His performance was raw yet captivating.  Think of a diamond in the rough.  Once polished, it was going to be special.  As the Music Director for the Northwest Jazz Festival, I invited Lolo and his band to perform at the 2018 festival to do some polishing.  People loved it.

We caught up with Marcus to talk about his new single release and forthcoming music.  You are going to want to know about Marcus and the release so read on:

TZ:  Tell us briefly about your journey to the US and eventually to Buffalo

ML:  I was born in the US in 1993, grew up in Haiti for the first 16 years of my life as was my parents’ wish. There, I discovered my love for music in church. I started out playing hymns by ear and would jump at any opportunity to play the piano. I studied briefly (a year or less) and intermittently under two young female Haitian pianists: Donaldzie Théodore and Fabiola Macénat between ages 8 and 11. I then studied under Samuel Dorval between ages 12 and 15. I came to the US in the summer of 2009, continued playing in churches leading bands and choirs. I attended Forest Hills High School then later the New York City College of Technology. I moved to Buffalo in 2015 to continue my studies at UB.

TZ:  You studied piano performance at UB.  What was the experience like for you?

ML:  Studying piano performance at UB is by far one of the most defining events of my life. There I met Professors George Caldwell and Eric Huebner, both great performers who have experienced international acclaim and they have through their influence convinced me that the music in me was worth sharing. Navigating the Jazz and Classical worlds at the same time and learning from world-class faculty has given me a peek at the music industry and has allowed me to slowly and progressively carve my place in it.

TZ:  Who were your musical influences growing up?

ML:  My musical influences growing up were quite varied and include too many artists to list. I’d like to mention, however, that I was exposed to a wide array of musical styles from all over the world. I listened to everything: Haitian Roots music, Konpa, Twoubadou (All Haitian Styles). I was also exposed to Latin American music, From Salsa & Bossa Nova to Bachata & Merengue. Jazz and Gospel became my focus for a long time after I discovered them. Classical being a regular part of my practice regimen, obviously informed my playing as well.

TZ:  You have just released a single dedicated to Manno Charlemagne.  Who was Manno and why is he important to you?

ML:  Manno was by all standards a revolutionary. A misfit who sought to expose every wrinkle in the fabric of the status quo, instead of conforming to the ways of an inequitable and unjust society. His music was the rallying cry that accompanied the Haitian people in the transition from the dictatorship of the Duvaliers, to the establishment of the first democratically elected Haitian government. He spoke out against the ills that imperialistic policies of foreign powers inflict upon smaller nations and was firmly rooted in his Haitian identity as am I. He is a powerful example to me of what it means to be an impactful artist with a rich legacy.

TZ:  The single is titled LaFimen.  A Manno Charlemagne hit song.  What can you share about the composition and arrangement of the song you are about to release?

ML:  Lafimen (Smoke in English) is a metaphorical text addressed to the military junta who assumed power in Haiti after the coup of 1991. In essence, it likens the government in place to smoke, a force that blinds and suffocates the people. The gist of the song, however, is a reminder to the smoke that the people are the homeowner. A homeowner who with a simple crack of a window or the opening of a door can kick it out. So Lafimen, beware. It is the ultimate Ode to Democracy. My arrangement of it is as the title suggests, a tribute to the great Legacy of social consciousness that Manno has left us with his passing in 2017.

TZ:  What plans do you have for more music compositions and recordings in the future?

ML:  I plan on releasing a full album as soon as circumstances permit. It is likely to feature music from varied cultures, languages, and backgrounds. All I can tell you right now is that Jazz will definitely be central to it.

TZ:  You assembled talented musicians and will have a special appearance by Schadrack Pierre.  What can you tell us about Pierre and the ensemble?

ML:  I am proud to say that all of the musicians featured on the record are from the city of Buffalo. The great musicianship in this city is probably the best-kept secret in New York State. The single was also recorded here in Buffalo at Select Sound Studios. A big shoutout to Bill Kothen, the Owner, and Fred Bethschen, our engineer who did a fantastic job recording and mixing.

Schadrack is a Haitian-American singer from New Jersey and an Alumnus of the New School in New York. He is a very gifted individual with an impressive résumé. He has performed at some of the most prestigious venues both nationally and internationally. He’s a great soul and a very special talent.

TZ:  You are serving as the Director of the Love Supreme School of Music, which was reopened in 2019 by the Pappy Martin Legacy Jazz Collective.  What would you like to share regarding the progress and experience so far?

ML:  My directorship at the Love Supreme School of music has been life-changing so far. It has given me the opportunity to touch the lives of young musical minds in underserved communities around Buffalo and ensure that they receive a quality music education. Nothing gives me more joy than to watch students of mine who could barely read two notes at a time last year, fly through a Bach piece this year. We are continually strengthening our curriculum and keeping improvisational elements of Jazz at the center of our method. Thanks to Dawn Martin-Berry Walker for the opportunity and The Ralph Wilson Jr. Legacy Funds for their continued patronage.

Since that introductory performance in 2018, the maturation of Marcus Lolo is wonderful to see and hear.

The ensemble on the single release, as Lolo mentioned, includes a superb cast of Buffalo-based next-gen jazz artists making their mark.  They are:

What follows is the official music video of Lafimen. The video, well-produced, displays the captivating arrangement and orchestration:

You can also find the tune on the streaming services Spotify and Apple Music.

Marcus Lolo and Schadrack make a compelling tribute to a Haitian national hero. A meaningful story that honors their Haitian heritage and the spirit of Democracy.

As mentioned at the start of this article and interview, the next-generation of jazz artists emerging in Buffalo is impressive. Put Marcus Lolo and the ensemble performing in this tune on your watchlist for the future.