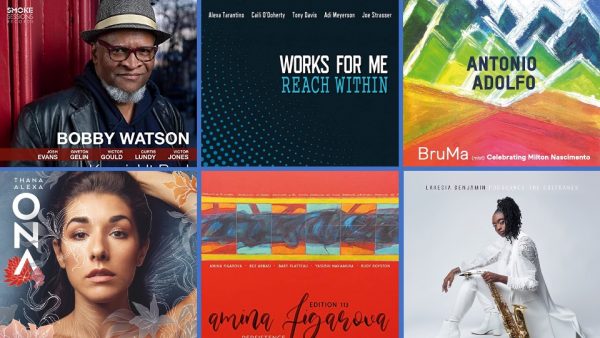 The year began with much optimism and excitement for the world of jazz. Anticipated were tours, festivals, concerts, club dates, and new jazz albums. Many of what we anticipated came to a crashing halt by mid-March of 2020. The global COVID-19 pandemic had arrived. Severely impacting jazz artists, venues, festivals, clubs, and the livelihoods of all those affected. One flickering light of hope throughout the year has been the release of new jazz albums.

A challenge when making “best of” or “favorite” year-end lists is to avoid all the marketing hype associated with new jazz album releases. Taking time to reflect on what stood out. And what you found yourself actually spending time listening to repeatedly.

In no particular order, offered here are 25 favorite jazz albums of 2020. Enjoy and listen to fantastic jazz!

Pursuance: The Coltranes by Lakecia Benjamin

The saxophonists Lakecia Benjamin pulled together a roster of all-star musicians, some with ties to the Coltrane era, to produce a stellar album. The music echoes Coltrane while unleashing the impressive talent of Benjamin and other next-generation jazz stars.

The Latin Side of Horace Silver by Conrad Herwig

As he did with Herbie Hancock and Joe Henderson, trombonist and bandleader Conrad Herwig displayed unique arranging inventiveness. Taking the essential classic music of Horace Silver and arranging it into Latin Jazz excitement. A much-anticipated big band album recorded live before an audience. If you are missing the live experience, then this is a must-listen.

Amina Figarova is a prolific jazz pianist, composer, and arranger known for epic-like songs. Often using sextets to produce large ensemble sounds. She follows up her magnificent Road to the Sun album of 2019 with something completely different. Her first endeavor into an electric fusion sound. Making use of the electric keyboard and electric guitar. A refreshing take by one of the best composers in jazz.

Keepin’ It Real by Bobby Watson

Bobby Watson, the legendary alto saxophonist, does exactly what the album title says. Keep it real for a straight-ahead jazz jam with supreme jazz players. Who, display tight chemistry. A return to a style for Watson that romps with energy.

Saxophonist Jerry Bergonzi is a renowned jazz artist with 60 recordings in his discography. A noted teacher and composer throughout the world. His sound is rich, textured, and full-bodied. The versatility is astonishing. Nearly Blue follows The Seven Rays of 2019, a superb album that is written in a movement style. Nearly Blue could not be more different as it explores the melodic organ trio format. If you have not discovered Bergonzi, here is your chance.

Into The Shadows by John Fedchock NY Sextet

Trombonist, composer, and arranger John Fedchock has had many formats over the years. From quartets to big bands. Unmistakeable in any format is his swinging style that makes for a great listen. Into the Shadows showcases five originals from Fedchcock plus three arrangements of classic tunes.

The album, Round Again, marks a return of the Joshua Redman Quartet of twenty-five years ago. In the intervening twenty-five years, Redman, Brad Mehldau, Christian McBride, and Brian Blade have all carved out their own unique distinction. What is evident in the sound is the innate rapport and chemistry that never leaves. A special recording of a welcomed reunion.

Jazz vocalist Carmen Lundy is as unique as they come. Originality is her trademark. Writing beautiful lyrical songs echoing personal experiences, meaning, and sentiments. Lundy, with a superb ensemble of musicians, pays tribute to those who came before her in the songs she has written for the album. As the album title suggests, doing so with modern sensibilities.

This recording captures the late legendary jazz pianist playing live at Smoke Jazz Club in January of 2018. He is joined by Smoke Jazz Club regulars such as Eric Alexander, Vincent Herring, and Joe Farnsworth. Mabern’s style embodied hard bop. A style drawing from his time with Lee Morgan and others. The album is a delight and you get the chance to enjoy Mabern as the lead performer versus in a supporting role.

Plays the Music of Buddy Montgomery by Isaiah J. Thompson

Latin jazz percussionist Ray Mantilla died this year of lymphoma at the age of 85. Amazingly, he was able to produce one final album, Rebirth. Mantilla and his sextet sound as youthful as ever as they tackle classics such as “Dat Dere” and pop hits such as “Hit the Road Jack.” The master percussionist delivered one final Latin jazz gem before passing.

Shuffle and Deal by Eddie Henderson

Eddie Henderson follows up his fabulous 2018 album, Be Cool, with another album of note. Featuring the return of all-stars Donald Harrison and Kenny Barron. Henderson mixes swinging tunes, such as the title track, with gorgeous ballads such as Over the Rainbow. There are true masters at work here. The result is a classic jazz bop album not to miss.

Harold López-Nussa is one of the finest next-generation Latin jazz pianists to come out of Cuba recently. In this album, he combines Afro-Cuban jazz with Cuban pop songs. The result is exciting music. One can imagine being in the streets and hearing the music of Havana. For something different from the world of Afro-Cuban jazz, this is worth the listen.

The London-based saxophonist made a splash with her debut album. Although she has appeared in collaborative efforts with fellow Londoners, this is her first time as a leader. It is unique for she fuses jazz with Afro-Beat and the roots of Reggae. The album, in an important way, connects you to an important Afro-Caribbean music community and history that has existed in London.

Reach Within by Works For Me

Sometimes labels will pull together an ensemble to produce an album. It does not always work out so well for a variety of reasons. Then, sometimes you get magic to happen. When Posi-Tone created an ensemble of next-generation jazz musicians for an album project, magic happened. Works For Me features the talents of guitarist Tony Davis, saxophonist Alexa Tarantino, pianist Caili O Doherty, bassist Adi Meyerson, and drummer Joe Strasser. The produced album, Reach Within, turned out to be a creative force that surprisingly flew under the radar. The first three tracks are outstanding.

The Humble Warrior by Wayne Escoffery

The tenor saxophonist Wayne Escoffery taps into his youth and exposure to gospel music to create a standout album. The music and tone are captivating with a strong melodic structure. The ensemble provides ample energy. Especially the kinetic playing by Dave Kikoski. This is a great listening album for lovers of jazz who enjoy improvisational saxophone-led projects. If you haven’t discovered Escoffery yet, you surely will in the first twenty seconds of the opening track, Chain Gang.

What’s the Hurry by Kenny Washington

Kenny Washington is a male jazz vocalist from the Bay area of California getting his due. The album title, What’s the Hurry, is very apt. Washington makes his debut recording after performing in the Bay area for over 25 years. He developed a following for his relaxed style of singing from the Great American Songbook. A delightful listen it is.

Ken Fowser is a superb up and coming saxophonist with beautiful tonal quality. His album, Morning Light, puts this quality on display. The result is a beautiful album with a straight-ahead essence. Including adding a Latin tinge to three tracks that produce energetic chemistry from a stellar ensemble. There are trading fours amongst the bandmates that make you say – yep this is jazz.

Modes of Communication: Letters From the Underworlds by Nduduzo Makhathini

Nduduzo Makhathini is a South African jazz pianist, composer, and arranger who made his Blue Note label debut in 2020. Makhathini has made fantastic albums and tunes before being signed by Blue Note. Most notable was the song Waltz for Trane from his 2015 album, Listening to The Ground. His music is often described as spiritual jazz. The type of jazz certainly worth listening to in times of affliction from the global pandemic. Makhathini introduces us to songs of healing in the spirit of Zulu traditions. This album is well-produced and features incredible ensemble musicianship.

One good outcome of the pandemic is getting to learn about Champian Fulton via her weekly live streams. Fulton released an album dedicated to the 100th Centennial of Charlie Parker. As a pianist and vocalist, it seems a bit unusual but it works. It has more of a swing tone versus the fast twitching of bebop. The album is made extra special by the collaboration of saxophone great Scott Hamilton joined by trumpeter Stephen Fulton, Champian’s Dad. You get endeared to Fulton’s stylistic vocals right from the opening note of Just Friends, the first track. Showcased once again on the tune Star Eyes. An enjoyable listen that will get you toe-tapping.

The Brazilian jazz artist Antonio Adolfo has been producing one spectacular album after another. With Hybrido – From Rio to Wayne Shorter from 2017 being one of his finest. In his latest, he pays tribute to the pop and contemporary Brazilian performer/composer, Milton Nascimento. With another ensemble of excelling Brazilian performers, the pianist, composer, and arranger Adolfo creates a beautiful album. Rich in exotic sounds and textures you will enjoy.

In this self-released album, jazz vocalist Thana Alexa delivers a passionate musical story filled with resistance and personal expressions. Alexa invites you into the struggle and experiences of women. Doing so with the use of her vocals instrumentally and a decided fusion theme to the album. The album features an A-list of musicians, including her husband, drummer Antonio Sanchez. Take this journey with her as Ona is one of the most ambitious projects to come out of 2020.

The Unidentifiable by The Matthew Shipp Trio

The trio format in jazz has long been a favorite to many. Particularly jazz piano trio. What has made Shipp unique is how he has found a sound mixing free jazz with classical music. Think of it as a deep-dive into the jazz piano trio that is improvisational and enthralling. Despite the inflection of free jazz, a very listenable album for jazz piano trio fans.

Great Songs from Stage and Screen by Seth MacFarlane

Being a sucker for the Great American Songbook and anything with a Sinatra-like style, I was surprised to discover Seth MacFarlane’s sixth album release. It is filled with great songs from the second half of the songbook as he digs deeper to find the lesser-played songs. If you are a fan of anything Rodgers & Hammerstein, Cole Porter, or Lerner & Loewe with a Frank Sinatra/Nelson Riddle orchestration flavor, then this is for you.

The jazz music coming out of the U.K. in the past couple of years has been outstanding. Riveting next-generation performers such as Shabaka Hutchings, Ezra Collective, Nubya Garcia, Steam Down, Skinny Pelembe, Emma-Jean Thackray, Alfa Mist, and Jorja Smith. What is reimagined are classic Blue Note tunes that include Watermelon Man, Montara, Footprints, Speak No Evil, Maiden Voyage, and more. Their reinventions result in a bridge between a revered past and the younger generation of talent with a unique U.K. sound. Granted, not for everyone but this album will open your eyes to the groundswell of new performers in the U.K.