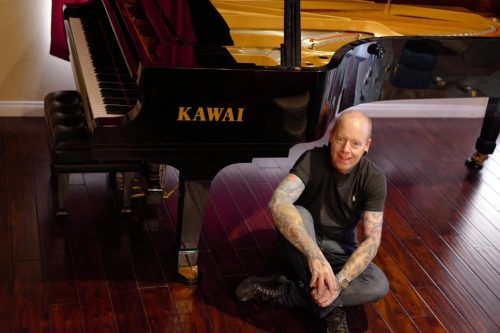 Mike Jones is one of our most accomplished mainstream jazz pianists. Since 2002, he has been the musical director for Penn & Teller’s Las Vegas. Jones hits the stage to play both before the show begins and, when called upon, during the act.

When the pandemic put a complete halt to performing in March of 2020, Mike most likely had a sense of shell-shock. After eighteen years of a steady performance schedule, he found himself with time on his hands. Fortunately, a superior Kawai piano is a part of his home. He has put it to good use. Performing solo weekly via Facebook Live.

This has led to Mike, a native of Buffalo and WNY, releasing a solo piano album. Says Mike, “this is the first solo album I’ve made in twenty years. It’s been amazing to do the solo playing from my home during the pandemic…people really seem to enjoy them…I’m fortunate to have a great piano and to play. “ He further shared, “all the songs I chose are in the public domain, which means these are songs everyone loves and it made it easier to put an album together quickly.”

Jones’s new album, entitled All By Myself, enables him to showcase his piano mastery on thirteen songs. His astonishing two-handed approach harkens back to the roots of jazz. The music burst from Mike’s hands in multiple flavors to enjoy. This fantastic rendition of Lady Be Good is a superb display of vibrant solo piano performing.

Jazz and pop standards are represented throughout the thirteen songs. Such as It Had To Be You, Chicago, All By Myself, and I’ll See You In My Dreams.

For piano jazz fans, this is one album you will want in your collection. Jones has made it easy and economical. The digital album is released on Bandcamp and for only $7.

You can purchase and download the digital album at this link: https://jonesjazz.bandcamp.com/releases

A welcomed release while we are still in the midst of the global COVID-19 pandemic. Sheltering at home. Perfect music to help us endure.