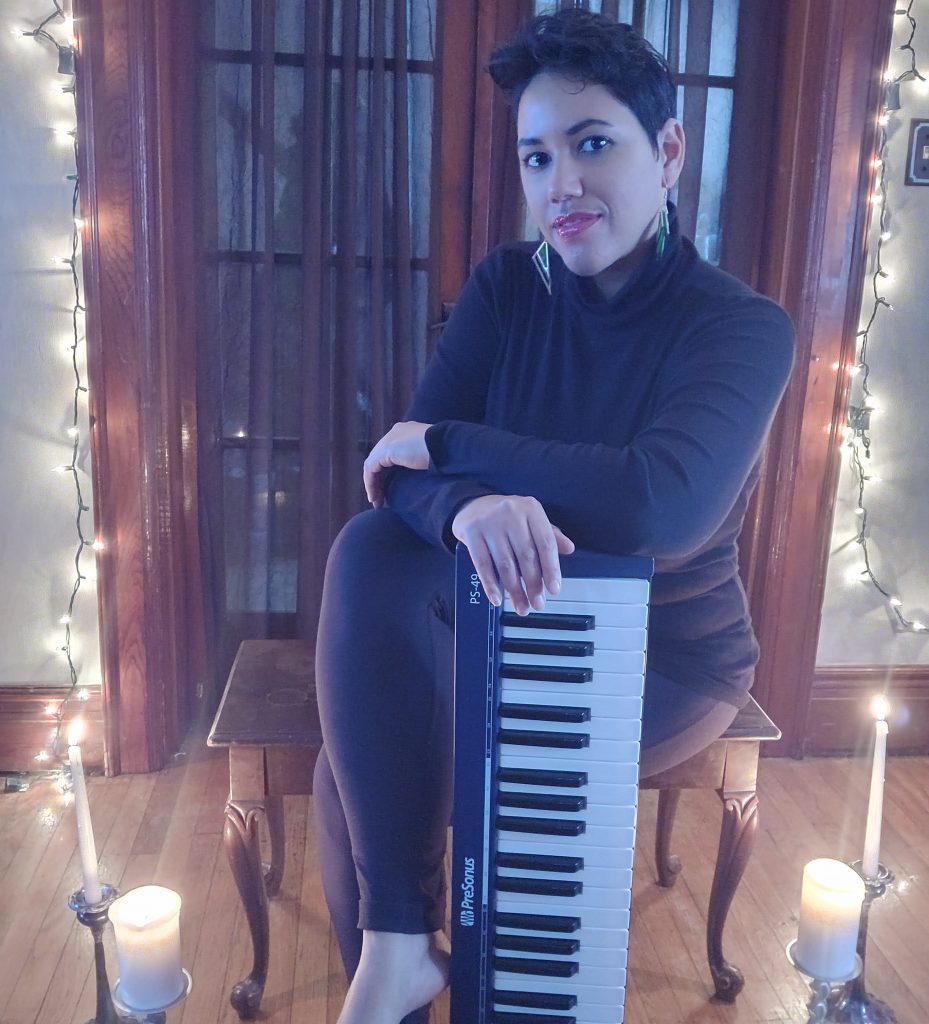 Many in the Buffalo community have come to know Saranaide, the multi-instrumentalist and vocalist, through a few spectacular JazzBuffalo-presented performances.  Three that stand out are the “So Brasil” bossa nova themed concerts.  The first at the Hotel Henry Jazz Concert Series to a sold-out audience of nearly 240 people a couple of years back.  Then this past summer, over 400 people (yes, in the era of COVID – we freaked out!) showed up at the Richardson-Olmsted Park as part of the Hotel Henry Summer Jazz Series.  Lastly, performing this past fall as part of the Premier Cabaret Lounge Jazz Livestream Series aired to over 150 households in the region.

As is usually the case, exceptional music and jazz artistry by the likes of Saranaide are not limited to one genre.  Saranaide (an artist name chosen by Sara Rodriguez) has explored jazz-pop, music with the Buffalo Afrobeat Orchestra, Latin Jazz, and heritage music from Puerto Rico, Mexico, and Central Latin America.  Now, she has explored further.

On Thursday, January 21, Saranaide released a new release EP entitled, Beyond.  A solo effort where she blends elements of jazz, soul, funk, and dance music into a “chill” sound as she describes it.  Definitely, a different side that also puts on a display of her looping abilities.  There are two songs in this five-song EP where she is accompanied by another music artist.  The two special guests are drummer/percussionist Michael Roupoli and saxophonist Ellen Pieroni.

We caught up with Saranaide to get the story behind this new release:

TZ: What can you tell us about the inspiration behind this latest release:

SR: The inspiration came from a culmination of things: First, a dear friend asked me to create music for her podcast that she started in the fall of 2020. I responded with a resounding YES, as we have similar qualities as women artists and yoginis. Secondly, my cousin Rosalie Rodriguez is an AMAZING artist. She put out some new work as well last year and the painting used for the EP really spoke to me. The name of it is “Loisa”, which is a region of Puerto Rico known for its black culture (and fancy footwork!). When I was asking her about this painting, she was telling me about when she was there last and that the coastline inspired her. Also, on that same trip, she learned that our grandparents are from that region of PR. It was then I knew I had to include her in this project. Not only did I want to use her art, but it also inspired me to write a song about it.

TZ: How did the pandemic impact what you set out to do?

SR: During this pandemic and the ability to work from home, I’ve been able to listen to a lot more music while working. Being a musician, I can only listen to instrumental music while I work. The advantage I find using Spotify as my platform of choice is that they have a wide variety of playlists.  I found myself exploring everything from my go-to classical music (my favorite while working) to acid jazz, which led me to a variety of lo-fi music. I was immediately drawn to it because it is chill, but also because I was noticing how simple, short and repetitive these songs were! What I was hearing in a lot of these songs is what I have been doing with my loop station for a little while now. So here started the birth of “Beyond”.

I wasn’t creating at all during the pandemic for a wide variety of reasons, so when my friend asked me to create music for her podcast, I jumped at the chance. I had been listening to the podcast from the start, so I knew what kind of vibe I wanted to create for it. The song “Beyond” brings an ethereal calm to the listener. We are both yoga instructors, so I wanted to integrate that aspect of meditation into it.

TZ:  What does it take to do a solo project like this?  How or what did you use?

SR:  Yes, this EP is a solo project. It was just me, my trusty flute, guitar, and midi keyboard. The only help I had was with the drums on “Loiza” and the sax on “Baoista”. Created in the comfort of my home, this was very much a spiritual journey for me. The floodgates opened up when working on the podcast music and I took that as a cue to ride the wave of creativity.

TZ:  What can you share about the opening track, “Loiza”, since you mentioned it as a primary source of inspiration?

SR: The opening number “Loiza” is an homage to the artwork and the sounds of my ancestors. When my cousin told me more about the painting and our family history, I knew I wanted to integrate bomba into this song. Bomba is a drum and dance from Puerto Rico that I have been learning about over the past 2 years. I asked my bomba teacher which bomba rhythms were from the Loiza region, did my research, and chose the rhythm that resonated with me. You’ll hear the corve drums as the heartbeat of the song. For this, I asked a dear friend Michael Roupoli to track the drums for me as the bomba community is very strict about preserving the culture. From there, I slept with what I was building as a track and really asked my ancestors for guidance. This song was a very spiritual process as I was woken up out of my sleep many times to document what they wanted me to hear.

TZ:  What can you tell us about some of the other songs that on this EP?

SR: “One Twenty-One” is a nod to my birthday. I see the number 121 multiple times a day. I wanted the track length to be 1:21. I wanted this as an opportunity to integrate binaural beats into a composition. I’m a nature lover, so when exploring the midi keyboard sounds, I loved all the different bird sounds. I’ve had some intense loon dreams in the past, so I chose that bird call for the song.

“Baoista” is a nod to my Buffalo Afrobeat Orchestra family. Rhythm is life for me, so again when exploring the midi keyboard and experimenting with sounds, I came up with this idea. I wanted to include Ellen Pieroni on this as she is the only other woman in the group and is just a KILLER sax player.

“Dança Celestial” was by far the hardest yet rewarding song to complete. My cousin Ezequiel passed away suddenly on 12/14/20 and it was a devastating blow to not only our family but to the community. He was a Spanish teacher at Buffalo International Preparatory (I did my student teaching with him), an amazing dancer, and THE BEST cook! He would always have kizomba dance classes at his house so I wanted to honor him with a kizomba inspired song. If you’re not aware, kizomba is a style of dance from Angola. “Dança Celestial” translates into “Heavenly Dance” in Portuguese. His birthday was on 1/12 so I wanted to have something ready to play at the celebration of life that his best friend put together in Delaware Park. It was a beautiful soundtrack as we lit lanterns and sent them off to greet him in heaven. For me personally, it was an important way to move through my grief.

To experience the creative artistry of Saranaide in a way we have not heard before, Beyond is just what you need right now.  An extraordinary fusion of sounds to enjoy with a remarkable story behind it.

This is yet another demonstration of how the next generation of jazz artists in our community is reshaping the music scene.  We are riding a wave of creativity and inspiring music as this special next-gen community continues to mature. In this case, we get a “gift” (as she states for us all – she likes to “give” on her birthday) from Saranaide, a unique ancestral contribution from Michael Roupoli, and the beautiful sax playing of Ellen Pieroni.

You can get Beyond through the streaming platforms of Apple Music, Spotify, and YouTube.