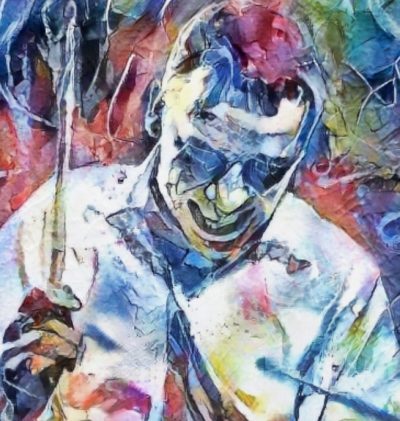 We recently brought to you several portraits of jazz legends by jazz trombonist and artist Ray Skalski. As the pandemic continues, Ray continues to use art as a release from the lack of opportunities to perform jazz live. (Read more in our original story here: Portraits of Jazz Legends)

Recently, Skalski centered on the legendary jazz drummer, Buddy Rich. One of the most dynamic drummers to ever grace the stage. Many drummers during the past forty years have been influenced by Buddy Rich, in one way or another. Noted for his high energy and masterful techniques. Often introduced during his career as the “world’s greatest drummer.”

Ray states, “I wanted to share another pandemic portrait, this one of Buddy Rich that I did whilst listening to the recording of him (several times over) soloing with his big band on the tune “Wind Machine.”

To give us context, here is the tune, Wind Machine, Skalski spent time listening to while creating the portrait:

There happens to be a medium-quality video of Buddy Rich soloing on this tune at an appearance on the Johnny Carson Show in 1979. An example of how Buddy Rich was one of the few drummers ever featured as the front musician with featured solos:

The energy of this tune and Buddy Rich’s display of control and technique is the envy of many drummers worldwide. For the artists reading, Skalski shared that he “used the medium of Dr. Martin’s Dyes (on illustration board), with a very loose, vibrant, and expressive-colorful technique to try to show the full range of Buddy’s colorful and very active motion while playing on that arrangement (also showing the energy of a very windy day).”

As we have seen before, Skalski recalls a personal experience that gave him the impetus to create the portrait. Ray shared, “Incidentally, that was an arrangement that I also played on while I was in the trombone section of the Buffalo State College Jazz Ensemble back in the late-1970’s-early-1980’s.  I recall that Buddy Rich brought his big band to Buff State during that time period and played that tune (in the Student Union Hall). I was able to hear him do it live; a truly inspiring and tremendous performance to experience!”

Here is Ray Skalski’s portrait of Buddy Rich, entitled “Wind Machine.” Appropriate titled and you can almost feel the wind: