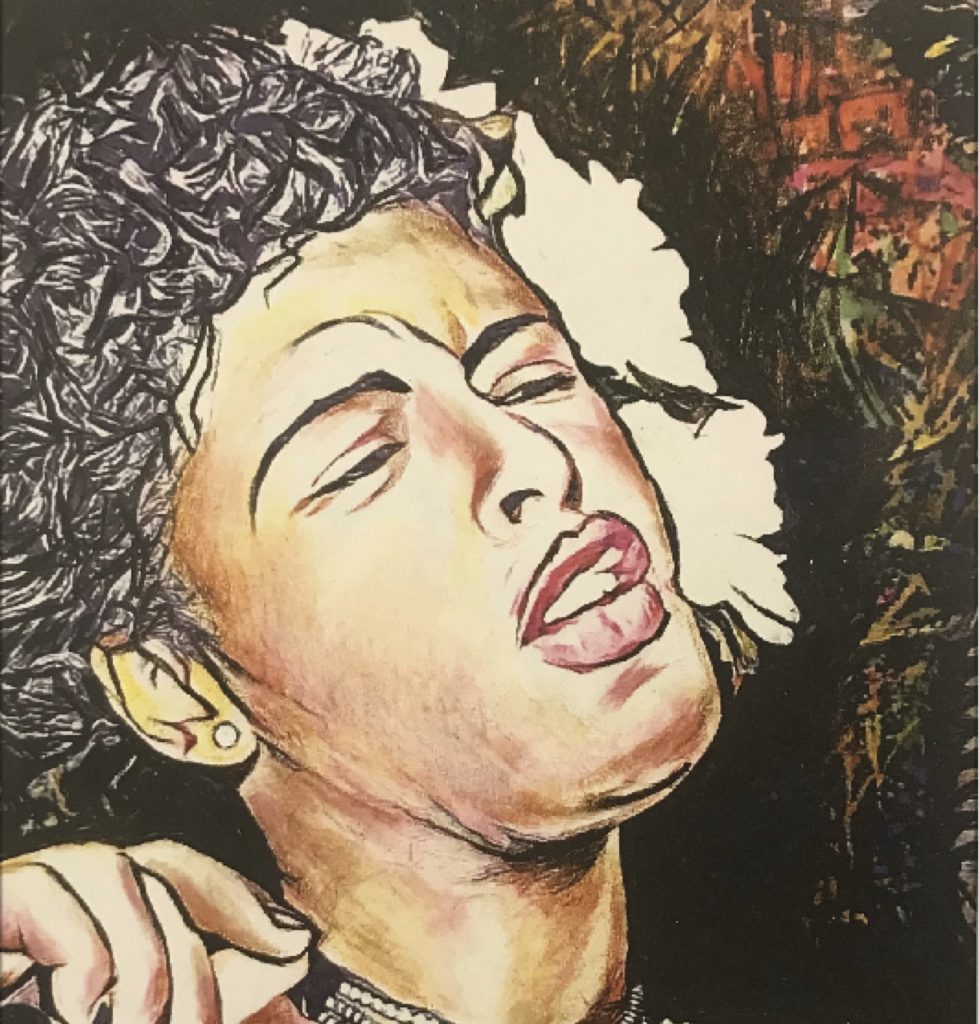 The legendary and iconic jazz legend Billie Holiday has been in the news often these past few months. Most recently, as a result of the movie, The United States versus Billie Holiday. Actress and Vocalist Andra Day gave an amazing performance and received a Golden Globe award and an Academy Award nomination.

If you have been following along as a JazzBuffalo reader, we have been receiving several fantastic illustrations of jazz legends from jazz musician and artist Ray Skalski. No doubt, the fact that Billie Holiday has been in the news lately has prompted Skalski to illustrate one of the most important singers in jazz history.

Ray focused on the dramatic and significant social song, Strange Fruit. He shares:

“I was inspired by her 1939 recording Strange Fruit (and that is also the title of the portrait), which I listened to throughout the creative process (as well as other tunes associated with her, like God Bless The Child, etc.). In relation to Strange Fruit, I tried to represent the social unrest and violence caused by racism throughout our fragmented country’s history by using a fragmented and painterly abstract expressionist treatment in the background of the composition. I also used somewhat a similar style to render her hair to express her troubled life and to harmonize the composition. I wanted the overall appearance of the work to be unsettling.  That is also the reason I chose to do this particular pose with her head tilted back and a pained expression on her face. I think that I was also responding to the texture in the sound of her voice.”

For context and to view the lyrics of this haunting song, view the following recorded at Cafe Society in 1939:

To bookend the life story of Billie Holiday, here is a live version of Billie Holiday singing Strange Fruit in 1959. Shortly before her death. While her voice displays the impact of alcohol and drug addiction, the mature phrasing makes this must-listening:

As we have seen in other illustration, Ray shares a personal touch with us. In this case, he recalls conversations with Dodo Greene and Al Tinney:

“I had the opportunity to perform with the late Dodo Greene (with a big band that also included Al Tinney on piano backing her). As you already may know, she recorded on the same Blue Note label as Holiday, and she also knew Billie personally. One night I was hanging with Dodo and Al at the bar upstairs in the Colored Musicians’ Club.  It was fascinating to hear some of their anecdotal stories from their past experiences (Al recalled when he played at the famous NYC jazz club Minton’s and when he performed with people like the legendary guitarist Charlie Christian).  Dodo told me that “Billie had lots of problems and was not well the last time she saw her in person” (back in the late 1950s). I also had Dodo’s recollection of Billie Holiday on my mind when I was working on the portrait…”

For your viewing and thanks to Ray Skalski, an illustration of the legend Billie Holiday: