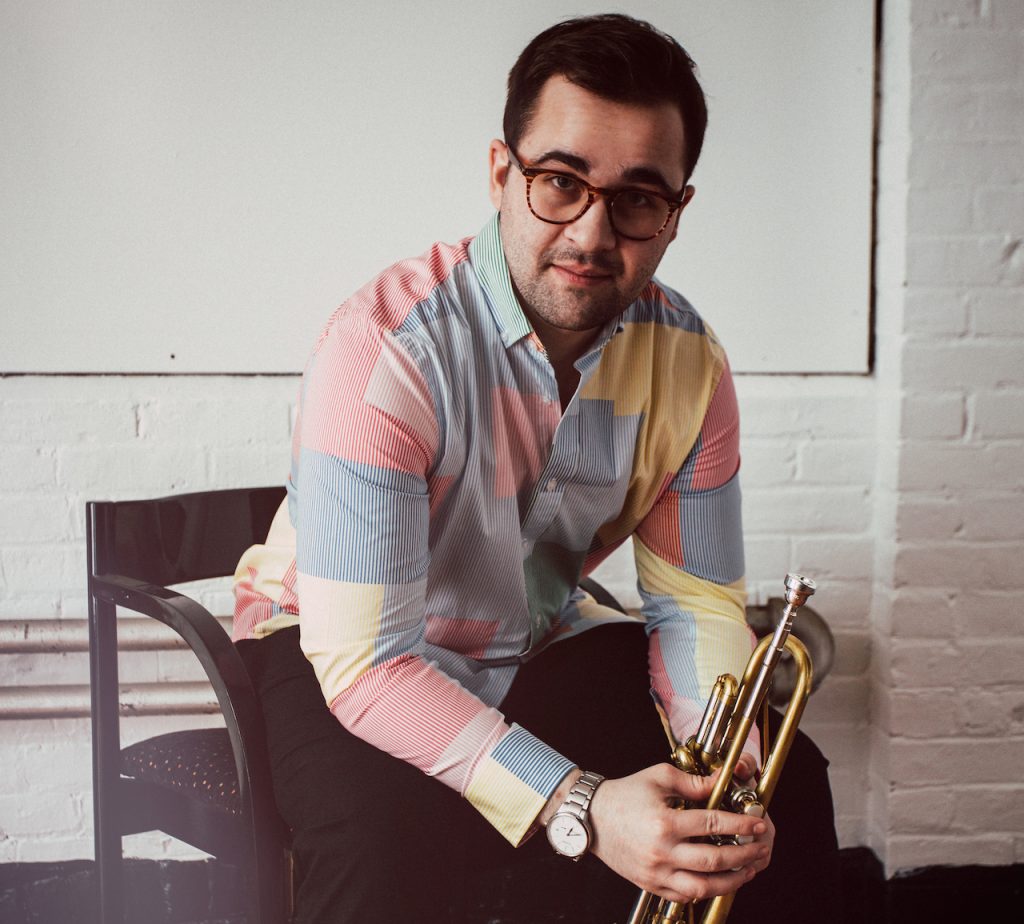 John Hasselback III comes from a familiar family name of jazz artists.  No doubt, carrying an innate sensibility in the artistry of music and jazz.  After a few pivotal years of pursuing the master craftsmanship of jazz trumpet, composing, and arranging, he has elevated from innateness to uniqueness.  Hasselback III is about to release a debut album (Friday, April 5th).  The title of the album is Entrance.  Aptly named for he is making an entrance as a leader, composer, and arranger.

From afar, I have watched John Hasselback III progress and mature into a jazz artist.  Creating a path that is uniquely his own.  Leaving high school and his roots in East Aurora, NY to study at the prominent Hartt School of Music’s Jackie McLean Institute of Jazz.  Noticeable in that John received a full-tuition scholarship.  After graduating, his pursuit led him to The Conservatory of Music at Purchase College.  You guessed it, on a graduate talent scholarship.

As the son of John Hasselback, Jr (trombone) and Lisa Hasselback (piano) as well as the grandson of John Hasselback, Sr (piano), John received learning throughout his young life.  Following in the footsteps of his parents who both attended the Hartt School of Music, his pursuit led to being mentored and tutored by master trumpeters.  First, by the noted jazz trumpeter and artist Freddie Hendrix.  Hendrix has performed with the likes of the Christian McBride Big Band and such pop artists as Alicia Keys.  Then Hasselback III received tutelage from the GRAMMY-nominated jazz legend, Jon Faddis.  Faddis was mentored by and played with the likes of Lionel Hampton, Dizzy Gillespie, and Charles Mingus before establishing his distinguished career as a leader.

Before we share more about the upcoming album, let us hear from John Hasselback III directly in this JazzBuffalo interview:

JB: What was it like growing up with parents and a grandfather who were so involved in music as teachers as well as in the jazz scene?

JH3: It was really great to grow up in such a musical household.  I can remember going to hear their gigs and concerts from a very early age, as well as meeting all of the jazz greats they worked with. It’s a very special thing for all of us to be able to play together and share the jazz tradition.

JB: A two-parter: How did you come to choose the trumpet?  And what do you love about jazz in particular?

JH3: As a little kid, I remember my grandfather and my dad showing me my great grandfather’s trumpet in our kitchen.  They both played some notes on it and from that point, I was hooked. I love that jazz is an aural tradition that’s passed down from generation to generation.  I have learned so much from studying and hearing the masters that came before me.  It has provided an outlet for endless creativity where I can express myself freely.

JB: Tell us about the Hartford experience and what you are up to now since you graduated?

JH3: Living in Hartford was a life-changing experience.  I was privileged to attend the Hartt School of Music’s Jackie McLean Institute of Jazz on a full scholarship. During my first few weeks there, I was brought under the wing of some of my mentors including Freddie Hendrix, Nat Reeves, Rene McLean, and Steve Davis. They have taught me so many lessons both in school and on the bandstand. I moved to New York City after graduating and studied with master-trumpeter Jon Faddis at The Conservatory of Music at Purchase College, where I graduated in 2020.  I have had the privilege of performing or recording professionally with musicians including Steve Davis, Kenny Washington, Donald Harrison, Nat Reeves, Eric McPherson, Rene McLean, Ronnie Burrage, Jonathan Barber, Freddie Hendrix, David Gibson, Ken Peplowski, Taber Gable, Pete Malinverni, Wayne Escoffery, Rick Germanson, Luques Curtis, Billy Pierce, Steve Nelson, Doug Weiss, Jon Faddis, and NEA Jazz Master Jimmy Heath.  I have also been able to travel and play at venues including The Blue Note, Jazz at Lincoln Center Dizzy’s Club, The Apollo Music Cafe, The Side Door Jazz Club, The Northwest Jazz Festival, The Albright Knox Summer Jazz Stage, The Handel Performing Arts Center, The Purchase Performing Arts Center, The White Plains Jazz Festival, The Hartford Jazz Cruise, and The John F. Kennedy Center for The Performing Arts.

JH3: This project is my entrance into a new chapter of my career as a leader and recording artist. I thought the title was fitting as I hope to do many more projects in the future. To record and offer something to the jazz tradition that is unique and features my original works is very special to me.

JB: You wrote 8 out of the 9 compositions on the album.  How long of a process was this?  In the end, what were you looking to achieve in the compositions?

JH3: I wrote all of the compositions at different times. Each of them is unique as they reflect on different memories, inspirations, and my surroundings at the time.  I don’t try to force anything in my writing and often leave things to simmer in my mind before I write out the final compositions at the piano. In my music, I express myself honestly and find beauty in the thought that there are secrets hidden in the sound.

JB: You have an incredible lineup on the album with Wayne Escoffery, Steve Davis, Jonathan Barber, Luques Curtis, and Taber Gable.  What was it like to pull this group together and then record the album with them?

JH3: Getting everyone together to record was an amazing experience.  Even though the pandemic provided some challenges, we were so thrilled to play music again.  We all made a weekend out of it and spent some good quality time together too. I have looked up to all of the musicians from a young age and have always been inspired by their sounds. They are some of my favorites to listen to and are also some of the most influential players on their respective instruments.

JB: What does the future look like; what’s on the horizon?

JH3: I will always keep writing original music and advancing my craft as a composer. I look forward to performing as a sideman and a leader in my own projects. I also aspire to someday teach in a university setting and will be working on my doctorate this fall.  I can’t wait to perform live music again when things open back up!

The new album, Entrance, is set for release on Friday, April 5th via Bandcamp.  Featured are some of the top first-rate musicians and next-generation jazz artists of today.  Making up a stellar ensemble in Hasselback III’s debut album is saxophonist Wayne Escoffery, trombonist Steve Davis, drummer Jonathan Barber, bassist Luques Curtis, and pianist Taber Gable.  Each artist having their own distinctive march in jazz today.  This is one superlative grouping for sure.

Take a view of the promo video for the album to learn more about the album and the ensemble:

To hear the marvelous tone and playing ability of the young trumpeter John Hasselback III, take a listen to the track, Third Time’s The Charm:

To preorder the album, you can go to the Bandcamp link below.

This is one grand entrance by a young and promising jazz artist.  A bright future lies ahead.  We can support such a future by purchasing and applauding his, Entrance.