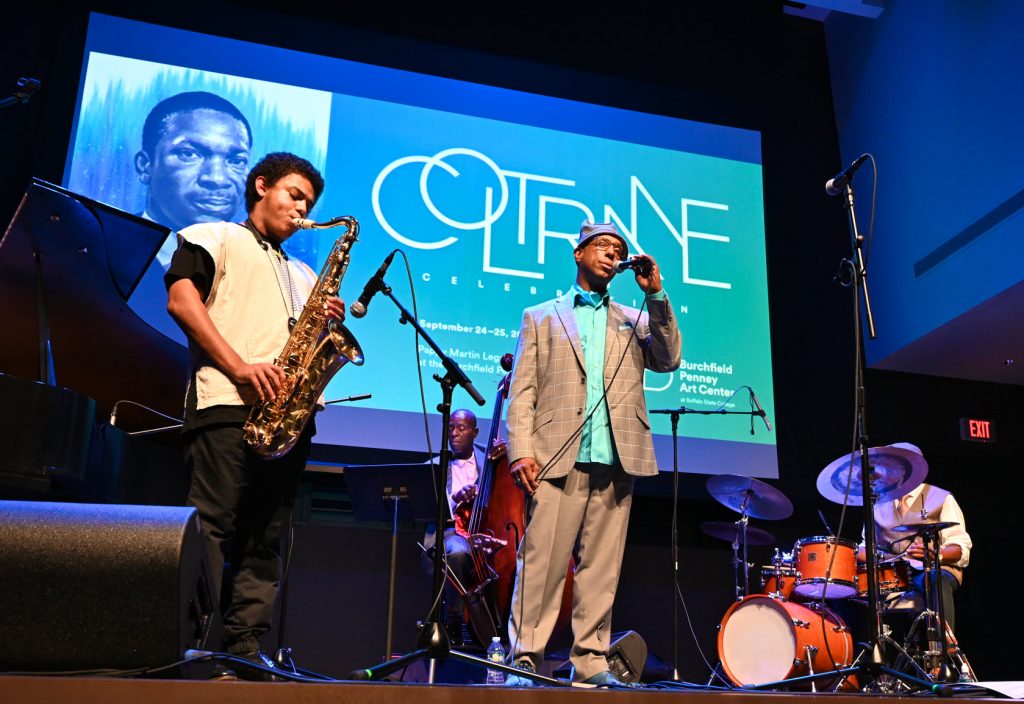 Reverence for John Coltrane was on display this past weekend as the Pappy Martin Legacy Jazz Collective, in association with Burchfield Penny Arts Center celebrated the birthday of the jazz icon.  The event marked the return of the annual celebration as a live in-person event after a hiatus due to the pandemic.  A most welcomed return it proved to be.

The celebration, which began on Friday evening and included a Saturday matinee and evening performances, pays homage to the music and influence of Coltrane.  Fifty-four years since Coltrane’s untimely death in July of 1967, his influence continues to grow and expand.  Friday’s visiting guest artist, two-time Grammy Nominee saxophonist Tia Fuller, showcased her mastery of the alto sax instrument.  While Fuller’s name became well-known due to her involvement with Beyoncé, there is no mistaking Fuller as a master of the saxophone in the Coltrane tradition.

Fuller’s show began modestly as she encouraged the George Caldwell-led trio that included Jeff Campbell on bass and Sean Jefferson on drums, to take ample solos.  Each, and especially by Jeff Campbell, put on dynamic displays of improvising that were captivating.  Fuller hit her stride on Duke Ellington’s “Take the Coltrane” from the classic Duke Ellington & John Coltrane 1962 Verve album.  It began a string of tunes where she launched into Coltrane-inspired soloing.

Fuller’s treatment of “My Favorite Things” embodied the spirit of Coltrane’s riveting solos.  She referred to the influence of her parents and how she listened to Coltrane.  Expressing genuinely her love affair with the music.  Coltrane’s “Giant Steps” is ranked as one of his most intricate compositions.  Fuller launched into this song with vigor and put on a masterful display of performing the complex solo structure many associates with this song.

One of her last tunes was Coltrane’s version of “My Shining Hour.”  A fitting finale to an hour plus where Fuller truly shined.

On Saturday, the legendary bassist Curtis Lundy was up to his knack for creating ensembles as the Artistic Director for the Pappy Martin Legacy Jazz Collective.  Bringing together Emilio Modeste on sax, Wallace Roney, Jr. on trumpet, Terreon Gully on drums, and George Caldwell on piano.  Lundy focused this year’s program on the influence of Coltrane as a sideman.  For instance, the ensemble performed the Tadd Dameron classic, “On A Misty Night,” whereby the fast-rising star in jazz Modeste played beautifully.  The band launched into the Miles Davis tune, “So What,” and was stellar in its performance.

A highlight of the evening was the special guest appearance of T.C. The 3rd, a vocalist based in the New York area and Philadelphia.  A delightful surprise for the fans of the classic Johnny Hartman and John Coltrane album.  Performing “Lush Life” and “Autumn Serenade” evoked the emotional responses the album has prompted for decades.  No doubt, a highlight of the evening for many.

Each evening began with the Love Supreme School faculty performing Coltrane tunes and enabling students to showcase their development.  The adoring faculty and students showed the power of jazz to inspire. Not every day do you get to hear students playing Coltrane’s tune, “Impressions.”  This should be loudly applauded.

The collaborative effort by Dawn-Berry Walker of Pappy Martin Legacy Jazz Collective and Renata Toney of Burchfield Penny Arts Center along with the programming/production guidance of John Smigielski resulted in another excellent Coltrane Birthday Celebration.

Enjoy all the photos and the fabulous photo gallery by JazzBuffalo contributor, photographer Jack Zuff: