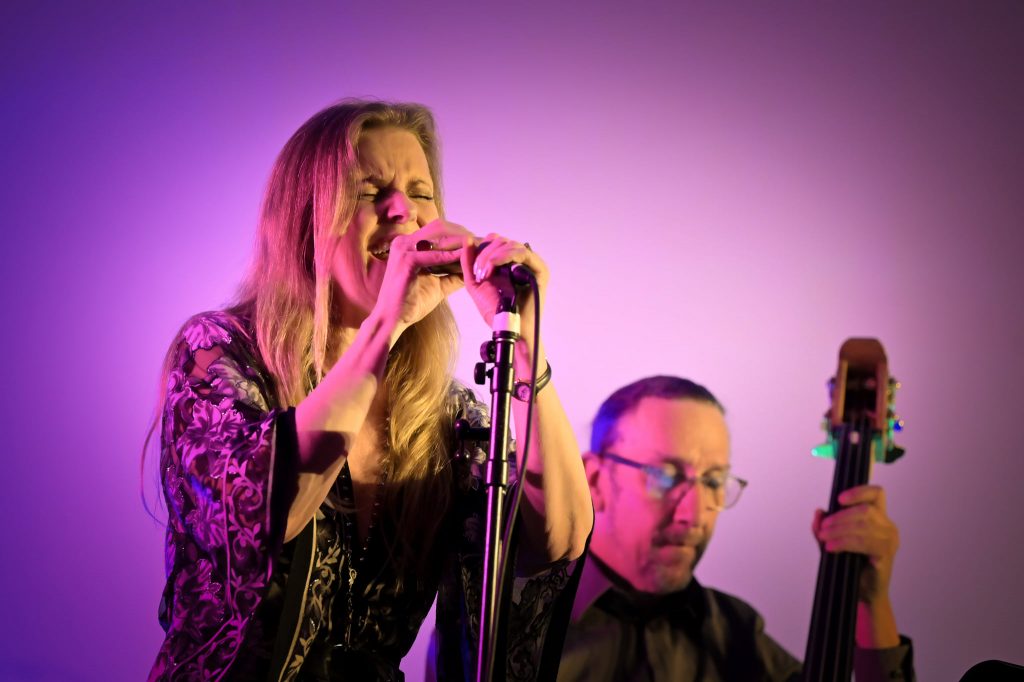 The Tierney Sutton Band, together for more than twenty-five years, arrived in Buffalo yesterday afternoon with much eagerness to perform.  Although they had just performed in New Jersey and Pittsburgh, they did so with the great singer Ann Hampton Calloway.  A different concert.  This performance was an opportunity to be on stage as The Tierney Sutton Band for the first time since before the pandemic.

They delivered and then some!  Drawing from their Grammy® Nominated Screenplay album, as well as others, they showcased why this band has garnered 9 Grammy® Nominations in the past 15 years.  The exceptional talent and musicianship of Christian Jacobs (piano), Ray Brinker (drums), Kevin Axt (bass), and Tierney Sutton (vocals) sparkles with uniquely crafted arrangements.  Their chemistry is so exact and refined that it warrants study by science.

Every song, such as Memories, On A Clear Day, the two Grease songs You’re The One I Want and Hopelessly Devoted To You, Diamonds Are A Girl’s Best Friend, and more was a gem of unmatched jazz artistry.  Tierney Sutton’s instrumental-like vocals taking the audience on a journey through waves of themes, colors, and emotions.  Ending with an encore performing the emotional Moon River/Calling You medley that resulted in a few teary eyes in the audience.

Tierney Sutton engaged the audience in banter and the audience responded.  A spontaneous love affair with the band ensued.  Including the band responding to calls from the audience to perform the cleverly arrange “Fever” as an encore. Certainly, a concert where saying “one for the ages” just may not be enough.

Comments That Tells The Story

A sampling of comments from the audience say it all!

“This one is one for the memory books! A gorgeous concert in a beautiful venue.“

“Just outstanding, I would love to hear them again and again! Their remakes of old tunes was spectacular. I was truly transported.“

“One if the best jazz concerts I have ever attended! They didn’t just do the American songbook they added a great jazz spin to it! Great arrangement!“

“What a terrific show! Look forward to them coming back to town.”

“Astounding! I felt like I died and gone to heaven!“

“The Tierney Sutton Band last night presented by JazzBuffalo, was an extraordinary gift to behold The arrangements were breathtaking, and every musician brought an incredible depth of musicianship to the table.”

“A wonderful evening! Humor, grace and excellence was omnipresent! Got a kick out of the two “Grease” tunes!“

“What a great performance tonight by the Tierney Sutton Band!!!!”

“This had to be the GREATEST jazz concert I have ever attended!! (No fancy lighting or props needed!) Their beautiful soundscapes created personal images for listeners from groovey, cool, sensual, cookin to hot-YOU name it.“

Saying Thank You To Many!

It was a historic jazz night for Buffalo.  As we welcomed one of the most esteemed long-tenured bands in jazz to our city.

Producing such a concert is a result of much help.  Much gratitude goes out to:

Most of all, thank you to the audience for your generous participation and support.  None of our ability to produce a jazz concert of this caliber is possible without you!