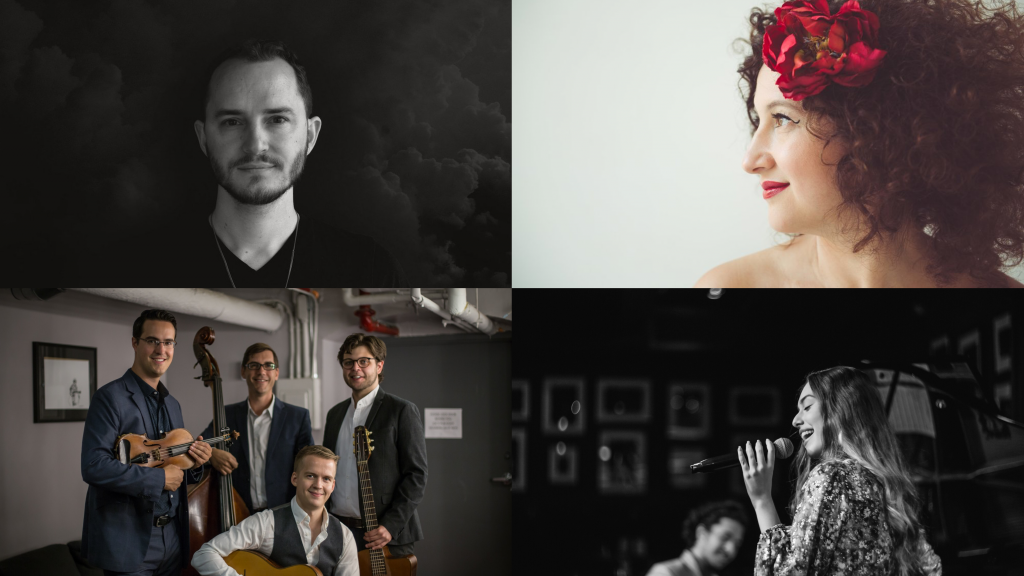 The recent JazzBuffalo produced concerts at the Seneca One Auditorium featuring rising star Janet Evra and 9-time Grammy® Nominee Tierney Sutton proved to be a welcomed enjoyment for the audiences in attendance.  The partnership between JazzBuffalo and Seneca One provides the community with an outstanding venue to present some of today’s rising stars in the jazz world and beyond.

Building on the spectacular experiences of the two initial concerts, we are pleased to announce additional events for 2022.  We will be hosting concerts from January through June of 2022 in the Seneca One Auditorium.  Providing the experience of pre-concert music, food, and drinks available in the Seneca One Lobby and Bar, and high-quality sound and lighting for the community to enjoy.

The “Live at Seneca One” series will focus on next-generation rising stars, as well as a unique variety.  Concerts will include the Rhythm Future Quartet with prodigy phenomenon Henry Acker, rising star swing jazz vocalist Svetlana, Grammy® nominated rising star saxophonist and composer Remy Le Boeuf, and the young jazz vocalist taking New York and beyond by storm Anaïs Reno.

The first concert will be dedicated to celebrating the 111th birthday of gypsy jazz pioneer Django Reinhardt with the Rhythm Future Quartet. We will follow that up with a special Valentine’s Day weekend concert “Love at the Movies” featuring Svetlana.

Details and links on each “Live at Seneca One” concert are listed below.  You will be able to purchase tickets directly at the JazzBuffalo.org event listing or through Eventbrite.

Tickets are $29 for each show.  For a limited time, JazzBuffalo is offering a generous early bird promo code for all concerts of $9 off each ticket.  Use the promo code, EB9, when checking out.  Do not miss out on this opportunity to see incredible talents at this discounted price!!

(The hyperlink “Enter Promo Code” is directly above the word TICKETS when checking out.  Here is a screenshot of where you will find it.)

The Live at Seneca One series of concerts:

A Special JazzBuffalo Celebration of Django Reinhardt’s 111th Birthday with one of the premier modern gypsy jazz groups in the US and Europe! Use the Early Bird Promo Code EB9 to get $9 off each ticket now! The acoustic jazz ensemble, Rhythm Future Quartet has a straightforward agenda: to keep the spirit of Gypsy jazz alive and expanding in today’s musical universe. The virtuosic foursome, named for a Django Reinhardt tune, offers up a newly minted sound, influenced by the…

“…The most impressive new jazz singer to appear on the scene since Veronica Swift.” – SCOTT YANO, L.A. JAZZ SCENE “With her grace, gravitas, serenity, and prodigious skills—one can proclaim that the work of Anaïs is impressive without any added qualifier/caveat like “…for someone her age…”’ – ROB LESTER, TALKIN’ BROADWAY “…This is a once in a lifetime voice..” – STEPHEN MOSHER, BROADWAY WORLD “…you’ll know you’re in the presence of pure young vocal genius when you hear her sing…

2019 Winner of the Sarah Vaughan International Jazz Vocal Competition! With a voice as smooth as velvet, SAMARA JOY’s star seems to rise with each performance. Following her winning the 2019 Sarah Vaughan International Jazz Vocal Competition, she is currently receiving rave reviews for her debut recording, which features Samara backed by the Pasquale Grasso Trio.  Growing up in New York, music was a pervasive presence, due to the inspiration of her paternal grandparents, Elder Goldwire and Ruth McLendon, who led the…

One more concert, scheduled for Friday, May 27 will be announced soon. Save the date for it will surely be one more of today’s rising stars in music and jazz!