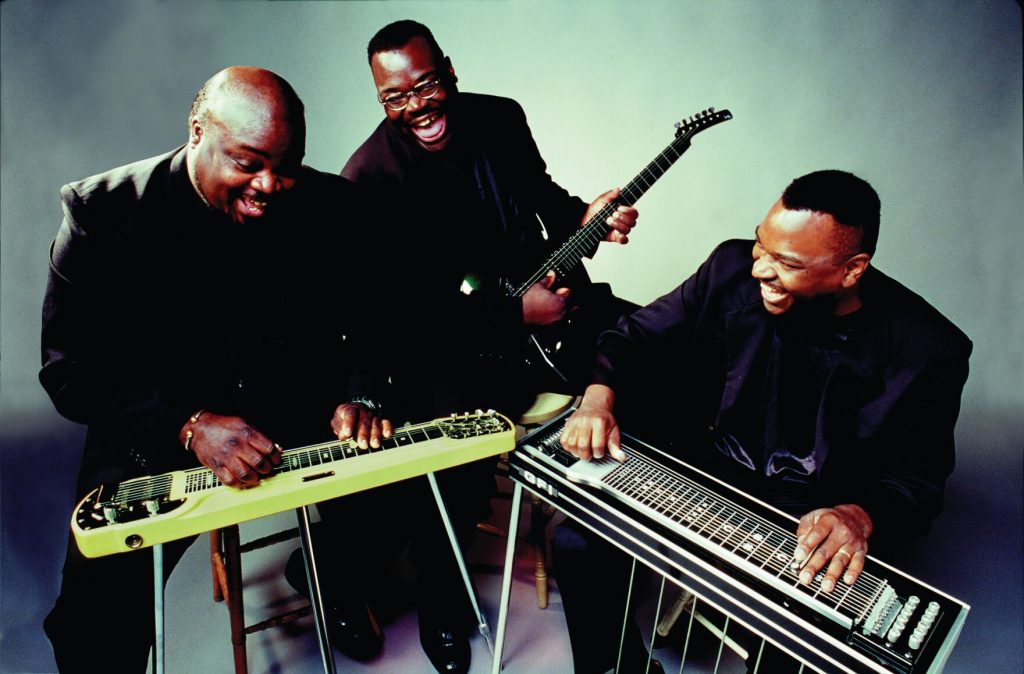 Tradition isn’t built overnight. It took a few decades for Rochester’s Campbell Brothers to learn the tradition of the sacred-steel sound, which dates back to the 1930s and House of God services. Soaring, crying guitar strings, mimicking the human voice, and an insistent groove accompanying the words of the Black church. Services that backed the ministry of the Campbells’ father, first in a church off Goodman Street, then a later move to a building in Rush.

And the Campbells — Chuck on pedal steel, Phil on electric guitar, Darick on lap steel, and Phil’s son Carlton joining later on drums — piled new notes onto that tradition. The Campbells released their first album, “Pass Me Not,” in 1997. John Medeski, of the acclaimed alternative jazz-fusion outfit Medeski Martin & Wood, produced the Campbells’ 2005 album, “Can You Feel It?” The Allman Brothers Band called Chuck and Phil on stage to join them at concerts. Darick toured with bluesman Keb’ Mo’ and Mavis Staples, and teamed with Chuck, Bootsy Collins, and Buddy Guy as The Slide Brothers, a tribute to Jimi Hendrix.

Chuck has estimated that The Campbell Brothers have played in 25 countries over the years.

The pandemic limited the group to a handful of dates. And then, this: Darick had a heart attack in February 2020, the morning after a show.

There were complications, including leg surgery, and stents were implanted to open the arteries to his heart. Weeks passed, and Darick was back home in Georgia. On the road to a slow, but expected, recovery.

“All of a sudden we received a call that, hey, he was on a ventilator,” Phil says. “And having trouble breathing.”

His symptoms were familiar to anyone following what was emerging worldwide. “In retrospect, I almost think that, really, that was a COVID death,” Phil says. “Even though it was not recorded as such.

“He was so weakened by those other procedures, that’s probably why he couldn’t fight it off.”

Of course, Darick still lives in the music. In the midst of this COVID-induced lull, in what should have been a typically busy Campbell Brothers schedule, the group has released a new album. “The Campbell Brothers Present John Coltrane’s A Love Supreme.” And Darick’s there.

As it turns out, the live album actually wasn’t the Campbells’ idea. Bill Bragin, a New York City promoter for a musically curious audience, was producing a series for broadcast called “Wall to Wall.” In 2001, he pulled the Campbells into a tribute to Miles Davis.

A few years later, Bragin and the Campbells’ booking agent suggested the group take on “A Love Supreme.”

But tackling what might be John Coltrane’s finest album? Is that a good idea?

Yes. And the fact that a saxophone has never been a part of The Campbell Brothers was exactly the point.

“They got together and said, ‘Hey, look, don’t try to do it any kind of way note for note, anything of that nature,’” Phil says. “Because, they said so many — even saxophone players and jazz musicians — have failed to do that. All we want you to do is capture the spirituality of it.”

The Campbells debuted their sacred-steel version of “A Love Supreme” in 2004 at New York City’s Lincoln Center. The group has done it 15 or 20 times since then. The new album is a 2015 performance from a show in Amsterdam.

In the Campbells’ hands, the music reflects the journey that Coltrane himself had taken personally at the time he was recording “A Love Supreme.” It is representative of his journey from drug addiction. Phil says the journey mirrors the Campbells’ path as Christians. “It’s the same kind of walk, that’s the parallel we drew.”

A love supreme is a love of god. Different gods, sure. For the Campbells, it’s a Christian god. For Coltrane, it was a move toward Eastern religions.

“What name, or form you chose, depending on what your religion is, it still all points to that greatest love,” Phil says, “And that’s what ultimately saved him.”

“He was straight to the end, as far as dealing with the demon,” Chuck says.

Yet the demons may have had the last word. Coltrane was only 40 years old when he died in 1967. The cause was liver cancer, although armchair doctors attribute it to his heroin and alcohol use.

The four movements of “A Love Supreme” are different roads on Coltrane’s journey. “Psalm,” Phil says, is “thanks for being delivered from what many people describe as being hell on earth, right? When you talk about being addicted to narcotics.”

The soulfulness of the sacred-steel guitars is a match for Coltrane’s introspection. “It became more of an interpretation rather than a cover,” Phil says. Of those four movements, the brothers suggest “Pursuance” is the closest to their own sound. “Because it was up-tempo, we just took it to church,” Phil says.

“To be honest,” Chuck says, “to give you a true feeling, every one of the movements have a Campbell Brothers spot.”

Taking on the monumental work of a jazz icon has been well received, even by the purists. The Campbell Brothers saw this when they played Duke University, which along with Lincoln Center had commissioned the group’s sacred-steel interpretation. Coltrane fans showed up with original vinyl copies of “A Love Supreme” for the brothers to sign.

“That was pretty astonishing and amazing for us,” Chuck says.

“We were shocked when people were bringing us Coltrane albums to sign,” Phil says. “Which meant a lot to us to be accepted by some of those. Some musicians have almost really been put in their place for even attempting to play Coltrane by some of his fans.”

Not that it was accepted in all quarters. One tradition was shattered. The Campbells separated from their church when it demanded that the brothers restrict themselves to performing only in services, and not take sacred steel to the rest of the world.

And now, even without Darick, the Campbell Brothers will continue to take the music to the rest of the world. They are working on new material. Many of the dates postponed from this year are rescheduled for 2022.

Yet it cannot be anything but different.

“And sometimes it’s difficult, too,” Phil says. “But I think what helps us is we firmly believe that Darick would want us to continue.”

“There’s certain songs we do, man, he sat to my right, and I would be looking for him to do certain things. He’s not there to do those certain things. That’s what makes it tough. And obviously those are huge shoes to fill, and we don’t fill them, quite frankly.”

The guitars are pared back to Phil’s electric and Chuck’s pedal steel.

“It feels more like church when we’re playing,” Phil says, “as opposed to when The Campbell Brothers were onstage and we had all this music to throw at people.”

“It was kind of hard to define what Darick would be doing,” Chuck says. “But now that he’s not there, there’s just a lot of parts he played that, the way his mind worked, only he would play. Although he was the youngest brother, a lot of times he acted like the oldest guy in the group.”

Moving ahead, without Darick, is yet another love supreme for The Campbell Brothers.

“So it’s a lot of things that we missed that we’re trying to redirect,” Chuck says, “But we definitely are going forward, and we do miss him a lot.”

(Reposted with permission of the author, Jeff Spevak and WXXI News. The original article first appeared on WXXI News on November 17, 2021. Link: https://www.wxxinews.org/across-the-universe/2021-11-17/campbell-brothers-find-meaning-in-a-cover-of-coltranes-a-love-supreme)