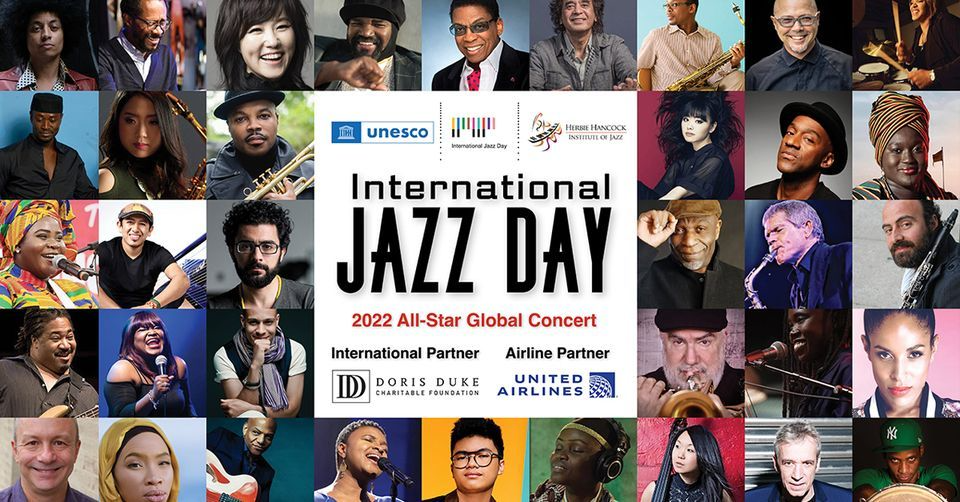 “Jazz carries a universal message with the power to strengthen dialogue, our understanding of each other, and our mutual respect. As the world is affected by multiple crises and conflicts, this international day highlights how much music and culture can contribute to peace,” said Audrey Azoulay, Director-General of UNESCO.

“With conflict and division in many parts of the world, it is my hope that, through the universal language of jazz, our celebration this year can inspire people of all nations to heal, to hope and to work together to foster peace,” said Institute Chairman Herbie Hancock, who co-chairs International Jazz Day with the Director-General of UNESCO.

In the lead-up to the 2022 All-Star Global Concert, a series of free, online education programs will be presented via jazzday.com, unesco.org, and the official International Jazz Day YouTube and Facebook pages. World-renowned jazz artists including multiple Grammy Award winners Arturo O’Farrill and Terri Lyne Carrington, Oran Etkin, Danny Grissett, Dan Tepfer and others will lead master classes and presentations. A complete listing and schedule of education programs will be available at jazzday.com/education. The 2022 education programs are presented in collaboration with the Berklee Institute of Jazz and Gender Justice, the JAM Music Lab University (Vienna) and the UCLA Herb Alpert School of Music, among other organizations.

Shortly before the Global Concert, at 3 pm EDT, UNESCO will celebrate the musical talent of women from across Africa with a second edition of its JazzWomenAfrica concert series. Organized in collaboration with the cultural agency ANYA Music (Morocco), JazzWomenAfrica helps counter the under-representation and insufficient recognition of women in the music industry. A discussion with women artists and music producers on this theme will take place on April 29th at 11 am EDT.

The worldwide program for International Jazz Day 2022 also includes an extraordinary array of programming in more than 180 countries, with concerts and performance-based initiatives complemented by diverse social outreach and educational activities. In Central Africa, the organizers and partners behind the Biennale of Luanda/Pan-African Forum for the Culture of Peace will present an extensive series of virtual roundtables, concerts, exhibits and other events highlighting the contribution of jazz in promoting peace, uniting people and fostering cooperation around the world. In the Republic of Korea, the Korean Jazz Association and other partners are planning six days of concerts themed around freedom. A “National Jazz Week,” culminating on International Jazz Day, will begin on April 21 across Chile, with participation from UNESCO Artist for Peace Danilo Pérez. Meanwhile on April 29th in the United States, Newark, New Jersey public radio station WGBO will celebrate the renaming of the street on which it resides in honor of legendary jazz musician, composer and Newark native Wayne Shorter.