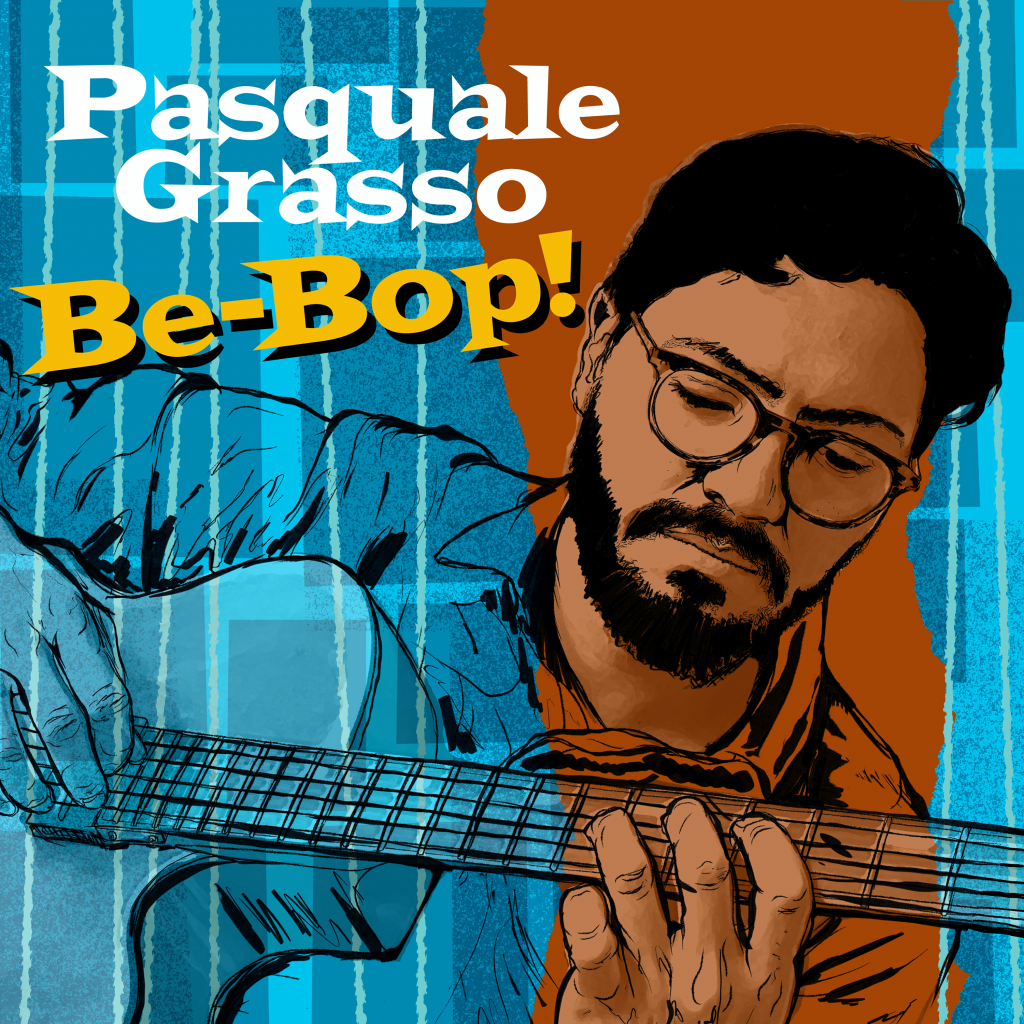 Be-Bop! kicks off in exhilarating fashion with today’s release of Dizzy’s quintessential composition, “A Night in Tunisia,” originally composed in 1942 when he was a member of Benny Carter’s band and which marked the beginning of Gillespie’s unique blending of Afro-Cuban rhythms with American jazz. Grasso achieves an astonishing balance of technical wizardry and swing, sounding like two guitarists coming out of the gate on the challenging head on top of the syncopated Latin rhythm. And his fleet-fingered solo break at the 1:03 mark is in the breathtaking tradition of Charlie Parker’s famous alto sax break from his 1946 Dial recording of the tune. Pasquale’s stream of single notes that follows for the next two minutes in his solo is even more astounding, brimming with rare facility and abandon to match his fertile imagination. Roland also turns in an animated bowed bass solo here while Balla engages in some slick trades with the leader near the end of the piece. Finally, catch Grasso’s brief dazzling quote from one of Paganini’s Caprices (the extremely difficult No. 24 in A minor) in the coda.

Backed by his working trio of bassist Ari Roland and drummer Keith Balla, the trio is in sync through super-up-tempo, challenging fare like “Shaw ‘Nuff,” “Groovin’ High,” “Cheryl,” “Ornithology” and “Be-bop,” whereas they settle into a more relaxed vibe on Thelonious Monk’s gorgeous ballad “Ruby, My Dear.” Parker’s “Quasimodo” is another relaxed mid-tempo number, featuring superb octave playing by Grasso and a brilliant bowed solo by Roland, and the trio takes its time on the lush “Lamento Della Campagnia,” based on the Billie Holiday torch song “Some Other Spring.” As the 33-year-old Grasso explained, “I had a tough time last year and Billie’s version of ‘Some Other Spring’ got me through some hard times, so I decided to record it.”

Special guest vocalist Samara Joy, who has been collaborating with Pasquale since 2020, appears on one track, the jivey mid-tempo swinger “I’m in a Mess” (originally sung by Joe Carroll on Gillespie’s 1951 album, School Days). “She’s incredibly talented and I’m happy to perform with her night after night,” Grasso said. “We’re having a lot of fun together.”

Fans of Pasquale Grasso and Samara Joy can catch them in Buffalo on Thursday, June 23rd, and Friday, June 24th. On June 23rd, Pasquale and Samara will support the JazzBuffalo Benefit Concert to a room of no more than 65 in the intimate CinemaRoom of Hallwalls Contemporary Arts. You can support JazzBuffalo by purchasing tickets here: https://www.eventbrite.com/e/333953332407

On Friday, June 24th, they will appear at Live at Seneca One in the Seneca One Auditorium at 8 pm. Tickets for the performance are available here: https://www.eventbrite.com/e/217200361127

Born and raised in Ariano Irpino in Southern Italy’s Campania region, Grasso relocated to New York City in 2009 and has since been wowing audiences with regular appearances at Mezzrow, Smalls, and The Django, where he has showcased his tremendous command of the fretboard by freely moving between single notes, chords and independent bass lines while flashing Art Tatum-Esque filigrees with uncanny speed and precision. “Since I was a little kid, I always had this sound in my head, then slowly it’s coming out,” he explained. “I was never too much influenced by guitar players, for some reason. I grew up listening to Art Tatum, Bud Powell, and Thelonious Monk. Those were my guys. For guitar, I always liked Charlie Christian and Oscar Moore, but I never really listened to too many guitar players. Of course, when I hear Barney Kessel and Chuck Wayne and Jimmy Raney, I love them. They’re all great artists but they never really got me when I was a kid. I was more into Bird and Bud, Dizzy Gillespie, Roy Eldridge, and Louis Armstrong. So I was always more influenced by horn players and piano players than guitar players.”

In 2015, Pasquale won the Wes Montgomery International Jazz Guitar Competition in New York City, including performing with guitar legend Pat Martino’s organ trio. Grasso was subsequently signed to an exclusive deal with Sony Masterworks, which led to his initial series of digital releases in 2019. Working with the simpatico rhythm tandem of Roland and Balla again, the great guitarist takes things up a notch on Be-Bop!

“Obviously, I think the older you get the more you understand,” Grasso said. ‘When you’re in your twenties, you just want to play everything you know. But over time, you realize that music is not about that — it’s about telling a story and making somebody feel certain emotions. I love Lester Young for that. That’s the beauty of music.”