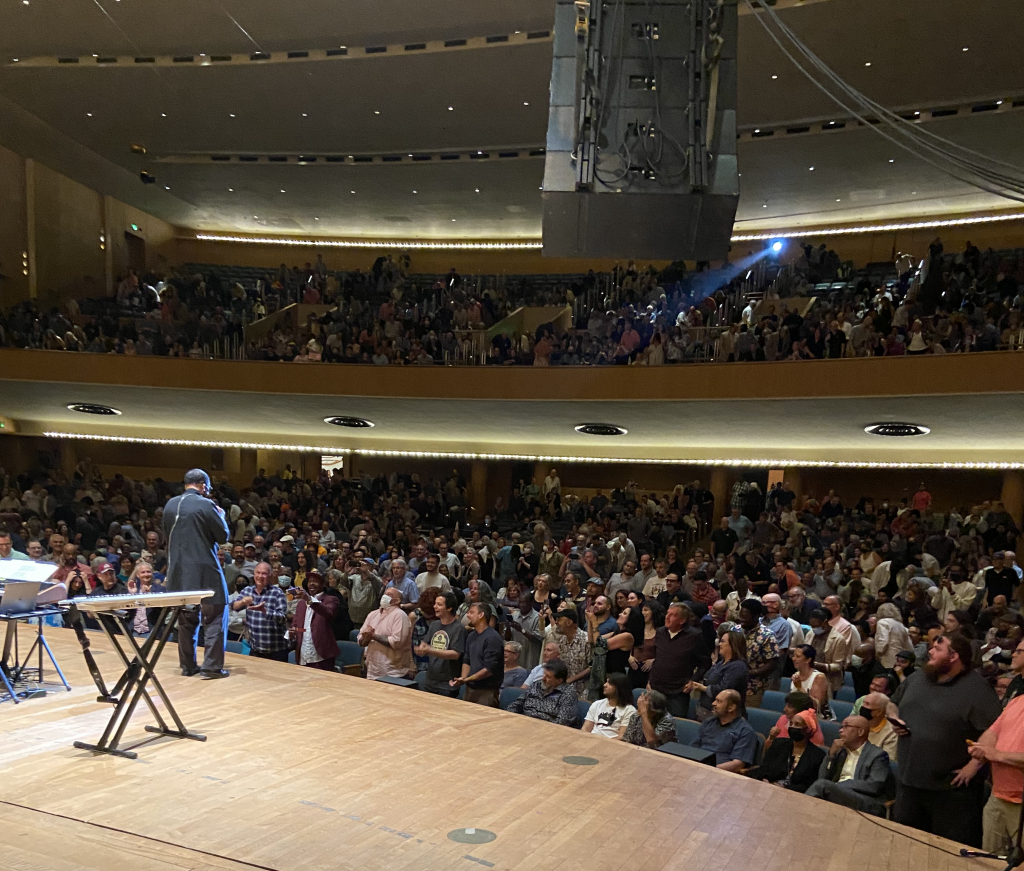 The jazz legend, Herbie Hancock fulfills the wishes of many in the audience.

The diverse audience of over 1800 strong leaped to its feet in thunderous applause and shouts. The mere sight of jazz legend Herbie Hancock and his regal-like entrance onto the stage evoked an emotional response. This was before a single note had even been played by an illustrious band.

For the diverse audience of young, old, and all in-between, seeing Herbie Hancock in concert had been a life-long dream. Interacting with the audience beforehand, you can see and feel the excitement in the air. Many mentions by incoming audience members that this concert represented a checkmark on their life’s bucket list of wishes. Or, recalling attending a Herbie Hancock on a date in the 1970s or 1980s. It was an evening of fulfillment for many.

It has been many written many times that when attending a Herbie Hancock concert, you are not entirely sure what you are going to get. The traditionalists will long for the early to mid-1960s Herbie Hancock recordings with Miles Davis and subsequent early groups. While others’ awareness of Herbie Hancock is due to his pivotal role in the evolution of jazz-fusion and jazz-funk. This evening’s riveting performance can be characterized as a hard right to the 1970s and 1980s era.

The concert began, however, with what Hancock has been referencing as an overture. The first few minutes were a collision of synthesizer effects more representative of free jazz. For the conventional purists in the seats, it may be safe to say thoughts of “uh oh – where is this going” most certainly entered their minds. That included me, to a degree, with the thought of “don’t get weird on me” bouncing around in my head. It did then, surely with relief to some, give way to an unforgettable night of jazz-fusion and jazz funkiness that was as fresh and experiential as only the grand master of jazz can do.

A hallmark of Hancock’s long tenure in jazz has been his ability to reinvent and recreate new sounds made possible by the musicians chosen to perform. Last night was no exception. The musicians produced an experience wrapped around the core of Hancock’s music. And that of his friends. The song that represented the night was ironically an innovative arranged score by the great trumpeter, composer, and arranger Terance Blanchard – of a Wayne Shorter composition. Blanchard’s treatment of “Footprints” was a funky groove masterpiece and displayed Herbie Hancock’s respect for the gifted artists on tour with him.

A highlight for many was the tune “Come Running to Me,” with Herbie Hancock making use of a vocoder while singing.  The lyrics and spiritual nature of the song proved to be an emotional charge. The bandmates that accompanied Hancock and Blanchard, Lionel Loueke on guitar, James Genus on electric bass, and Justin Tyson on drums were able to straddle the spectrum of such ethereal jazz-fusion beauty to the hard thumping funk that characterize Hancock’s music. Such as the audience favorite, “Chameleon.”

Since the concert leaned toward Hancock’s role in the evolution of jazz fusion and funk, the concert would have not been complete without his masterful use of the keytar. At the age of 82, he can still strut around the stage with aplomb and the keytar firmly in his grasp. An amazing sight to see.

It was truly a historic night of jazz in Buffalo. A magical milestone in the continued resurgence of the effort to position the city as a major destination for international jazz artists to perform. Many thanks to Dan Hart and Kleinhans Music Hall for boldly jumping in with two feet to take on the considerable risks of producing a concert of this magnitude.

The payoff, made possible by the 1800-plus strong audience in attendance, is the confidence to look out on the horizon for more opportunities. Opportunities to bring to Buffalo similar jazz legends as well as emerging jazz artists with bold confidence.

Let’s keep making history in jazz and in Buffalo!