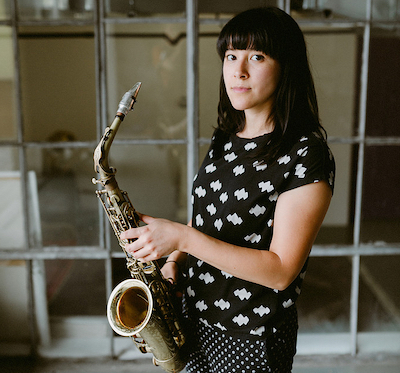 Named one of the top 10 female jazz instrumentalists to watch by SF JAZZ, Allison Au is a rising star saxophonist, improviser, composer, and bandleader.  Since 2013, Au has been garnering international recognition for her innovative and award-winning music in a quartet format.

The Toronto-based alto saxophonist is making her debut at the Northwest Jazz Festival in Lewiston, NY on Saturday, August 27th.

Au’s appearance comes in the midst of an incredible run of recognition that has included the Juno Award for Best Jazz Album of the Year for the album Forest Grove, Juno Award Nominations for Best Jazz Album of the Year for both The Sky Was Pale Blue, then Grey and Wander Wonder, winner of the 2017 Montreal Jazz Festival TD Grand Prix de Jazz, and three consecutive artist residencies at the Banff Centre for Arts and Creativity. Such recognition has made her a much sought-after artist with numerous jazz festival appearances.  Including concert appearances at the Monterey Jazz Festival and SF JAZZ Center in San Francisco.

Allison Au’s innovative music is noted for its warm tones with inspiration coming from Afro-Caribbean rhythms, post-bop expressions, and infused R&B sounds.  Since forming her quartet, the group has developed improvisational chemistry hard to replicate in a world where jazz musicians often come together spontaneously or for short periods of time.

This chemistry has resulted in three notable albums focused on original compositions reflective of exploratory ideas and inspiring innovation.  Her Juno Award-winning album Forest Grove and latest Wander Wonder album showcase her talents as a prolific composer with superb melodic forms.  Straddling between the hard bop cadences often found with the alto sax in jazz and piano-based lyrical elements that fill spaces with beauty.

Her music is consistently found on Toronto’s Jazz FM 91 and has climbed the charts on jazz radio programs throughout the U.S.  The Northwest Jazz Festival is excited to present an award-winning jazz artist whose star is rising in an accelerated fashion.  A next-generation jazz artist not to be missed.

As mentioned, the Allison Au Quartet has had an impressive run of recognition and awards that include the following since 2013:

2013 JUNO Award nomination for a debut album (The Sky Was Pale Blue, Then Grey)

Since the pandemic, Allison Au has spent time not only in live streaming but also writing compositions for a forthcoming new album. One that will surely receive notice from throughout the jazz world.

Here is a sampling of what reviewers and critics have said so far:

The Allison Au Quartet will be appearing on Saturday, August 27th at 4:00 pm on the Main Stage located at 4th and Center Street. Seating is available in front of the stage and it is free.