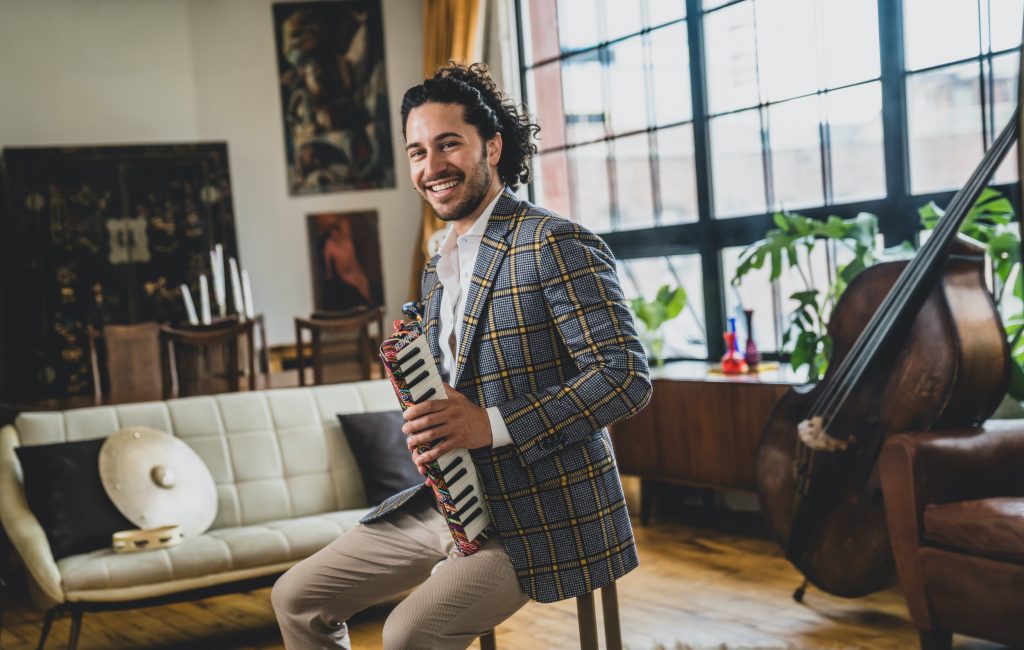 The year 2018 seems like eons ago. In an era dominated by the disruption of the Covid-19 pandemic, the passage of four years may seem like much more to many of us. At the 2018 Northwest Jazz Festival, Emmet Cohen appeared as a fast-rising star in the world of jazz. He returns to the 2022 Northwest Jazz Festival as the most recognizable virtual star in jazz. Much has happened in-between the years. Including winning the prestigious American Pianist Award and the release of a much-acclaimed album, “Future Strides.”

For all musicians, late March 2020 was a frightening time. It was like a master of the universe had flipped the switch and performing ended forever. However, fate and opportunity intervened almost immediately. As Cohen tells it, “we had been booked to play for a promoter named Derek Kwan in Lawrence, Kansas, and he said if we could set up a Livestream he’d pay us our fee,” recalls Cohen. His core rhythm section of bassist Russell Hall and drummer Kyle Poole lived within a few blocks of each other in Harlem. And, the idea was hatched to stream from Cohen’s apartment. Despite the use of just basic technology, the nascent “Live From Emmet’s Place” grew from an online audience of a few hundred to a few thousand in a matter of a few weeks. (JazzBuffalo has been a consistent Facebook Live co-host since nearly the start and is enjoyed by the JazzBuffalo Community weekly.)

Cohen further elaborates in an interview with station WBUR: “We learned during the pandemic that the purpose of music is to inspire and heal and bring people together and unite them. People everywhere want compassion and justice, and music can represent that. And it’s right in the tradition of the Harlem rent parties of the 1920s.”

Cohen started inviting guest musicians within a few short months. “I used to run a jam session at a club called Smoke, and this is really an extension of that, where we’re creating a sense of community. It’s entirely informal. We’re in my home, we’re not wearing shoes, and just having musicians to come hang out with us.”

Jazz legends like 87-year-old saxophonist Houston Person and 93-year-old singer Sheila Jordan appeared. Friends like Veronica Swift and Benny Benack III joined in the hang. Even young upstarts, such as Samara Joy, who recently appeared at a JazzBuffalo event, became guests. Cohen likes to add when talking about the phenomenon the weekly stream became, “we’ve had musicians 10 years younger than me…We’ve really brought people into the music who didn’t know they needed or loved jazz before. [Drummer] Joe Farnsworth just told me that he did five weeks in Europe and at every gig someone came up and said they’d seen him on ‘Emmet’s Place.’ So it’s been a good way to expand the audience not just for us, but for so many other musicians.”

Now that Emmet and his fellow musicians are back on the road performing in the US and Europe, they continue to stream every Monday night. Airing over 100 episodes since March 2020 with top-quality technology that brings people directly into Emmet’s living room.

The Emmet Cohen Trio returns to the Northwest Jazz Festival on Saturday, August 27th at 6:15 pm on the Main Stage. Emmet Cohen returns as one of the brightest stars in jazz and is recognized by a larger worldwide audience than in 2018. Today, through live concerts and Livestream, Cohen talks about how the trio has a deeper connection with their audience. “Now people feel like they know us because we’ve been a part of their lives,” says Cohen.