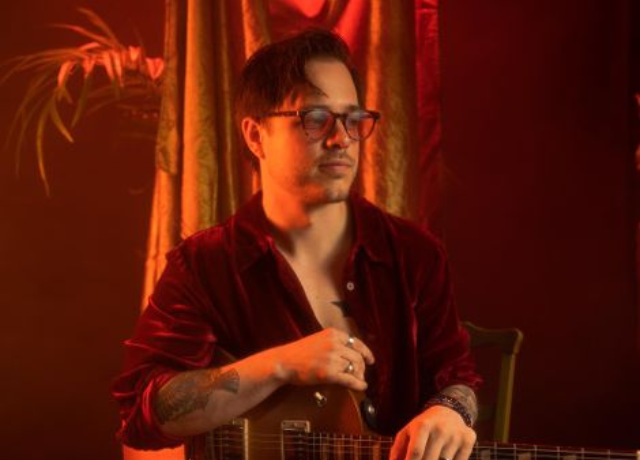 The Charlie Ballantine Trio returns to the region after the highly touted concert in September 2021 where the Trio performed spectacularly. The performance at the Hallwalls Contemporary Arts Center revolved around the magnificent music of his album “Reflection/Introspection”, an ode to Thelonious Monk.

The trio of Charlie Ballantine, drummer Cassius Goens III, and bassist Jesse Wittman are set to perform at the Northwest Jazz Festival in Lewiston, NY on Friday, August 26 on the Center Street Stage. This time, with another new album release, “Falling Grace,” that showcases Ballantine’s superb and unique styling, compositions, and arrangements.

Charlie Ballantine is acclaimed as one of the finest and most versatile young guitarists today. JAZZ TIMES MAGAZINE hails his playing as “teeming with intricate grooves and maniacal precision his guitar work is both beautiful and complex” and VINTAGE GUITAR MAGAZINE described his style by stating “Jazz, rock, and folk music peacefully coexist in Charlie Ballantine’s world”.

Equipped with an impressive body of original compositions on albums like “Vonnegut” and “Cold Coffee”, Ballantine also displays a great reverence for the jazz tradition through the inclusion of standards like ‘My One and Only Love’, ‘East of the Sun’ and an entire double album dedicated to the music of Thelonious Monk released September 2021. “In the vein of fellow guitarists like John Scofield, Bill Frisell and Julian Lage, Ballantine reconciles his educational background in jazz with the stylistic background of his instrument. He approaches the gratifying tonal and harmonic language of rock/roots with the groove, ambition and improvisational focus of a jazz musician” – (JAZZIZ MAGAZINE)

As a performer, Goens is an active member of the Scott Routenberg Trio, which recently released their debut album Every End is a Beginning on Summit Records and has been featured at such notable venues as The Green Mill (Chicago), The Velvet Note (Atlanta), The Jazz Kitchen (Indianapolis) and 2015, 2016 and 2017 Indy Jazz Fest. Goens also performs all original compositions throughout the Midwest with his jazz quintet Groove Theory and has appeared at Andy’s Jazz Club (Chicago) and the main stage at the 2012 Iowa City Jazz Fest.

Jesse Wittman is a prolific bassist out of Indianapolis having played with countless musicians throughout the midwest including Bobby Broom, Frank Glover, Charlie Ballantine, Rob Dixon, Steve Alee, Fareed Haque, and Greg Ward as well as many globally renowned musicians such as Dave King of the Bad Plus, Walter Smith III, Emmet Cohen, Adam Larson, and many others. As well as performing Jesse has also had a prominent recording career having recorded on dozens of jazz albums such as Charlie Ballantine’s award-winning “Life Is Brief: The Music of Bob Dylan”. Jesse also holds degrees from Indiana University and Butler university having studied under well-known educators such as David Baker, Luke Gillespie, and Brent Wallrab.

Ballantine’s arrangements and compositions are truly music to the ears of many. After a total of three performances in the region in recent years, jazz fans in this region continue to embrace his novel sounds and catch his rising star. Catch Charlie Ballantine Trio on Friday, August 26 at 8:15 pm on the Center Street Stage at the Northwest Jazz Festival in Lewiston, NY.