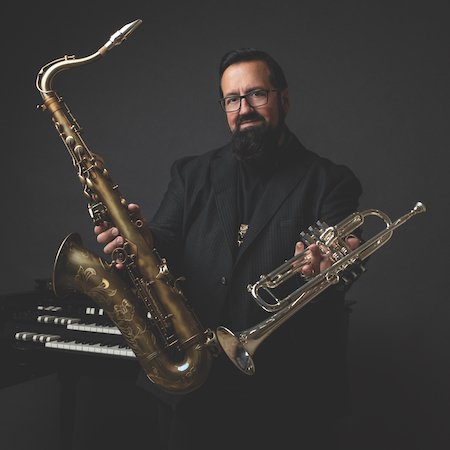 The Northwest Jazz Festival in Lewiston, NY will host the top jazz organist in the world, Joey Defrancesco.

Joey DeFrancesco, although born in Springfield, Pennsylvania, has deep roots in the Niagara Falls and WNY region.  Joey followed in the footsteps of his Sicilian-born Grandfather, who mastered the organ and performed with the Dorsey Brothers Big Band, and those of his father, “Papa” John DeFrancesco.  “Papa” John began his career playing trumpet and organ in Niagara Falls and later moved his family to Buffalo.  Eventually moving to the Philadelphia area, where Joey was born.

Watching his father on stage and hearing music at home, DeFrancesco likewise took to the organ and was so young when he started that his legs dangled from the bench, his feet unable to reach the pedals. A natural musician and born entertainer like his grandfather and father before him, DeFrancesco started playing piano at the age of five but quickly gravitated to the organ. Soon thereafter, the prodigious youngster made his first public appearance. He recalled the first time his father took him—at the age of six—to one of his gigs to sit in at a club called the Grid Iron in Philadelphia: “I knew ’Groove’s Groove, ’ Jimmy Smith’s The Sermon’ and a couple of things … I remember walking into that place and hearing that organ, you know… they were playing some blues: ‘Red Top’… and I was a nervous wreck (laughing)… I was so nervous that when they brought me up there to play, I only played the bottom manual; I didn’t even play the top keyboard. My dad had to adjust the volume for me ’cause there was no way I could reach the bass pedals or the volume pedal … and that was like the greatest experience I’ll ever have.”

Realizing his son’s unmistakable gift and desire to play, Papa John began taking his young son to clubs in and around Philadelphia, where the heroes of the jazz organ would appear on a regular basis. Such early exposure, in particular his first encounter with one of the legends of groove-organ music, a self-taught player named Jack McDuff, proved an important catalyst for DeFrancesco’s subsequent development. That evening, at a club called the Flight Deck in Wilmington, Delaware, DeFrancesco had the opportunity to play for a few minutes at the end of the show with the renowned player. “I came up there and played ’Rock

Since these early beginnings, Joey DeFrancesco has become a five-time Grammy-nominee, mastered over 30 recordings, and received a host of awards and recognitions.  He has topped the Downbeat Critic’s Poll in the Organ Category eleven out of the past fifteen years.  He also is the host of the popular SiriusXM Real Jazz Radio Show: “Organized.”

Joey was inducted into the inaugural Hammond Hall of Fame in 2014. At the jazz festival, it is notable that DeFrancesco will perform on a real Hammond B3 organ. He is scheduled to appear on Saturday, August 27th at 8:45 pm.

For more information and preferred seating tickets, go to this link: https://www.lewistonjazz.com/