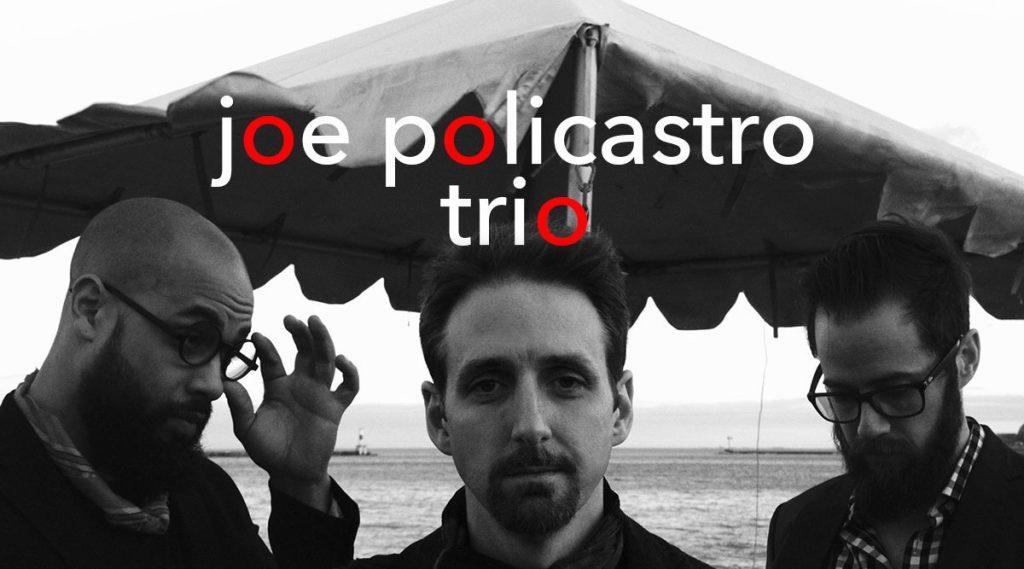 Live at Seneca One:

“The trio have refined their layered blend of the familiar and faintly far out, playing three nights a week at Chicago’s Pops For Champagne and through extensive roadwork. Their deep understanding of each other and deft analysis of choice repertoire repays repeat and close listening.” (Michael Jackson, Downbeat)

“The Joe Policastro Trio is a band that can turn “pop tart into Jazz art” (Travis Rogers, Jazz Owl) and one that should have wide appeal among both jazz fans and listeners of other genres.” (Hrayr Attarian, Chicago Jazz Magazine)

Hailed by Downbeat for its “deft analysis of choice repertoire,” and by the Chicago Reader for its “diversity of approaches to all kinds of source material,” the JOE POLICASTRO TRIO is a forward-thinking, Chicago-based jazz trio led by bassist Joe Policastro featuring guitarist Dave Miller and drummer Mikel Avery. While firmly rooted in jazz, the band’s open-minded, inclusive nature draws upon a wide array of musical styles and sources while still keeping the aesthetic of an acoustic trio intact.

Their most recent album, Sounds Uneard: Odds and Ends (2022), taps into a reservoir of their unique ability to take American pop hits and reimagine them in the jazz trio artistry.  Their previous album, Nothing Here Belongs, focuses on the band’s original music, whereas previous releases, West Side Story Suite (2013), POPS! (2016), and Screen Sounds (2017), highlighted the trio’s ability to remake unlikely songs in its raw, highly idiosyncratic fashion.

Beyond Chicago, the band has been extensively playing together throughout the US and Canada having even performed for President Barack Obama in October of 2016.

The trio was first introduced to Buffalo by JazzBuffalo at a sold-out concert (230+ people) at the Hotel Henry Jazz Concert Series.  Their return is much anticipated.

The Joe Policastro Trio are:

Tickets are $20.  The performance takes place at the fabulous Seneca One Auditorium.  The Seneca One Lobby and Bar will be open beginning at 6 pm for pre-concert drinks.  Pre-concert music will be provided and the doors will open at 7:30 pm.

EARLY BIRD SPECIAL: AVAILABLE UNTIL SUNDAY, SEPTEMBER 25 UNTIL 6 PM, USE THE PROMO CODE EARLYBIRD10 TO GET $10 OFF EACH TICKET – FINAL TICKET PRICE OF ONLY $10 – ACT NOW

To purchase tickets, click on the links below.  Look for the hyperlink “Enter Promo Code” above the word “Tickets” to apply the promo code – EarlyBird10

Tickets Available at Eventbrite: Joe Policastro Trio at Seneca One

More information is available at this link at JazzBuffalo.org with the ability to purchase tickets: Joe Policastro Trio Presented by JazzBuffalo