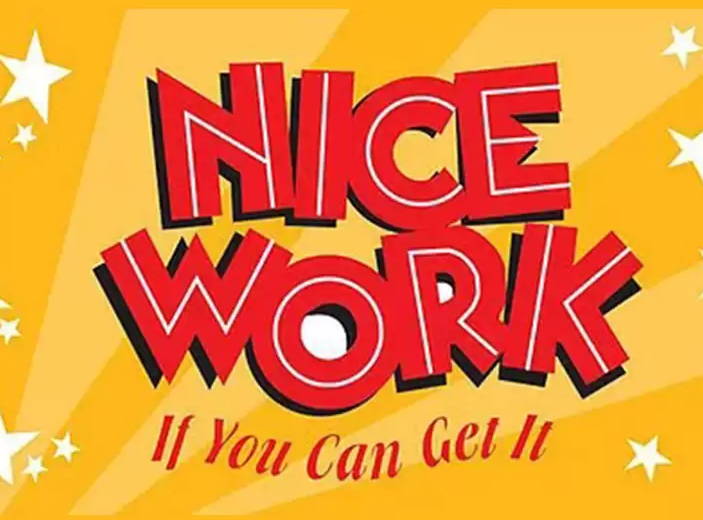 For the past eighty-plus years, the songs of George and Ira Gershwin have defined a good portion of the Great American Songbook.  Covered by the greatest of American jazz artists, vocalists, and American pop crooners.  George and Ira Gershwin’s compositions became the staple song lists for albums and concerts for revered singers such as Frank Sinatra, Ella Fitzgerald, Tony Bennett, Sara Vaughn, Nat King Cole, Carmen McRae, and many more.

Some of the world’s most prominent jazz musicians, trios, and ensembles have arranged Gershwin songs.  At any given moment across the country, there is a jazz trio and vocalist somewhere performing a Gershwin tune. Some of our best jazz vocalists and musicians today make the Great American Songbook and the songs of the Gershwins a major part of their repertoire.

It is for this reason that jazz fans and musical theater fans alike should catch MusicalFare There’s production of Nice Work If You Can Get It.  The musical is a comedic force as a reimagined tribute that premiered on Broadway in 2012.  It is a throwback to depression-era screwball musical comedies that provided the framework for Gershwin’s songs and the dancing of Fred Astaire and Ginger Rogers.  And provides the story for some of the greatest Gershwin songs to be performed.

In addition to Nice Work If You Can Get It (from Damsel in Distress), you’ll hear Someone to Watch Over Me, Let’s Call the Whole Thing Off, ‘S Wonderful, Fascinating Rhythm, Lady Be Good, I’ve Got a Crush on You, and several others.  They are refreshingly presented in the context of how George and Ira Gershwin intended for musical theater.

The story, in the era of prohibition and bootlegging, is highlighted by superlative choreography by Kristy E. Cavanagh.  Dancing, ensemble movements, spacing, and tap dancing by the entire cast were in short – phenomenal.  Entertainment at a level that leaves audiences wishing they could be on the set dancing as well.

The leads of Marc Sacco as Johnny Winter and Renee Landrigan as Billie Bendix were marvelous.  Standouts included John Kaczorowski as bootlegger Cookie McGee masquerading as the Butler.  John’s performance was captivating and had the audience roaring with laughter.  Emily Yancey’s super vocals and comedic acting as Eileen Evergreen provided many good laughs.

The entire cast gave the audience singing, dancing, acting, and comedy to laugh and marvel at.  A top-rate performance. Including music direction by Theresa Quinn and musicianship by John Maguda, Jim Runfola, Jimmy Runfola, and Peggy Scalzo.

In an age when the world is dealing with much negativity in the news and the arts may feel compelled to reach a higher degree of complexities, a throwback to the musical screwball comedy is a format we need more of.  Especially when it is performed at the outstanding level of this production.

The songs themselves give jazz fans reason enough to attend but add to that the stellar performances and the laughs – it becomes a must-see.  The remaining productions scheduled from October 5-9 are sold-out.  However, you can check the MusicalFare website periodically in case seats do open up.

Congratulations to MusicalFare Theatre for another fantastic production for the community to enjoy!