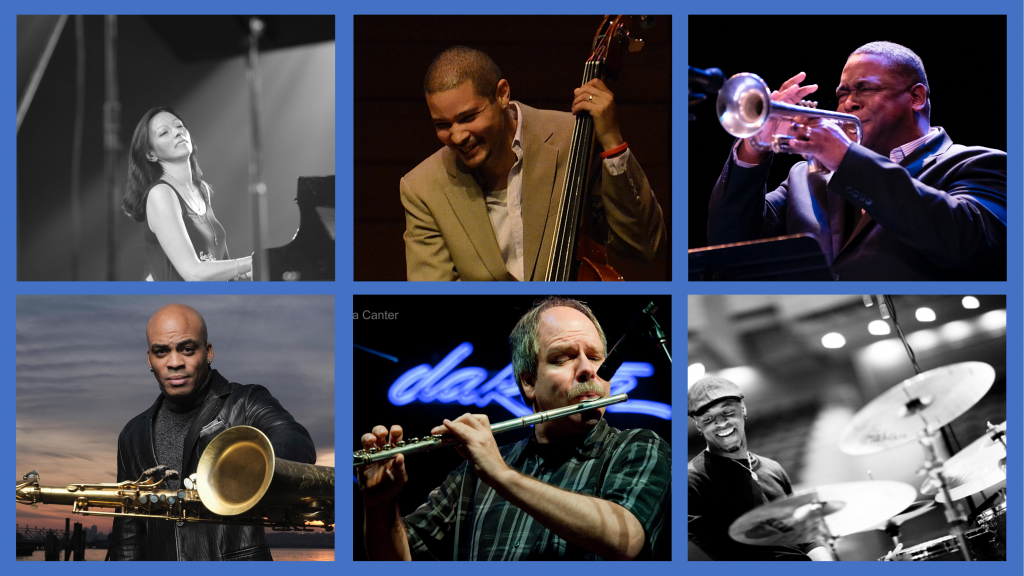 Amina Figarova Sextet to Include Grammy® Winners and Nominees

Born in Azerbaijan, the New York-based Amina Figarova is an internationally influenced—and recognized—composer, pianist, and bandleader. Throughout the past twenty years, Figarova’s sextets, have displayed remarkable chemistry that brings her detailed arrangements to life. Members of the sextets have included Grammy winners and nominees. Their dedication to Figarova’s powerful compositions gives the sextet a depth of feeling and unique elite status. The Amina Figarova Sextet has been a hit at major festivals like the Newport Jazz Festival and the New Orleans Jazz and Heritage Festival.

The Amina Figarova Sextet’s much-anticipated appearance at the Art of Jazz Series taking place on Friday, November 11 at 8 pm at Kleinhans Music Hall, will feature an elite ensemble of jazz artists. Each individual not only excels as a band member but also as a composer and bandleader in their own right.

Bart Platteau is unique among jazz flutists for a number of reasons, most significantly because he is the only one known to perform almost exclusively — 90% of the time — on the Flute d’Amore, pitched in Bb. Ideal for jazz playing, avoiding the potential shrillness of the concert flute and the projection problems of the alto.

Originally from Belgium, Bart Platteau studied at the Brussels Conservatory and earned his master’s in Jazz Performance at the Rotterdam Conservatory, including one semester at the Berklee College of Music where he met pianist/composer Amina Figarova who became his partner. He has since managed, toured, and recorded extensively with her sextet. After several years as the primary teacher for jazz flute performance at the Rotterdam Conservatory as well as at the Roosendaalse Music school in the Netherlands, Platteau moved to New York and has continued to play concerts all over Europe, North and South America, the Middle East,  Indonesia, Malaysia, and South Africa.

Since moving to New York City in 2000, tenor saxophonist Wayne Escoffery has become one of the Jazz world’s most talented rising stars and in-demand sidemen. He has recorded four CDs as a leader and has been on numerous recordings as a sideman. Wayne began his professional New York career touring and recording with The Eric Reed Septet. In 2001 he became a steady member of the Mingus Big Band/Orchestra/Dynasty, The Lonnie Plaxico Group, and Abdulah Ibrahim’s Akaya. Then in 2004 Grammy award-winning producer, arranger and trumpeter Don Sickler asked Wayne to be a part of Ben Riley’s Monk legacy Septet.

At this time Wayne was also touring with Jazz At Lincoln Center’s Music, and in 2006 Wayne secured one of the most coveted gigs in jazz: a frontline position in Tom Harrell’s working quintet. Wayne has been fortunate enough to study with some of the greatest jazz musicians in the world, including Jackie McLean, Ron Carter, George Coleman, Clark Terry, and Barry Harris. He also has first-hand experience playing with word class jazz musicians such as Herbie Hancock and Ron Carter. Wayne also leads his own group and performs internationally with The Mingus Band and Abdullah Ibrahim. He has experience introducing music to all ages and has learned the history of American Music from many of the innovators of the last five decades.

Trumpeter, composer, and arranger Freddie Hendrix, originally from Teaneck, New Jersey, has worked his way steadily during the last couple of decades to achieve his current position within the top echelon of first-call musicians whether it be as a jazz soloist, lead trumpeter or section player within a big band. His latter skill is borne out by his repeat employment with the archetypal ‘swing machine’, the Count Basie Orchestra which he re-joined in 2010 having left at the end of 2007 to work with pop star and actress Alicia Keys for her 2008 ‘As I Am’ world tour, performing 105 shows in over 30 countries.

Luques Curtis was born in 1983 in Hartford, CT. After having formal training in piano and percussion, he found himself wanting to play the bass. Luques studied at the Greater Hartford Academy of Performing Arts, Artist Collective, and Guakia with Dave Santoro, Volcan Orham, Nat Reeves, Paul Brown, and others. With his talent and hard work, he earned a full scholarship to the prestigious Berklee College Of Music in Boston. There he studied with John Lockwood and Ron Mahdi. While in Boston he was also able to work with great musicians such as Gary Burton, Ralph Peterson, Donald Harrison, Christian Scott, and Francisco Mela.

Now living in the New York area, Mr. Curtis has been performing worldwide with Eddie Palmieri, Stefon Harris, Christian Scott, Sean Jones, Orrin Evans, Christian Sands, and others. He is the recipient of the 2016 Down Beat Rising Star Bassist on the Critics Poll and also received the Ralph Bunche Fellowship to complete his Master’s Degree at the Mason Gross School of the Arts. He co-owns a record label called Truth Revolution Records alongside his brother, Zaccai. They have five releases under “Curtis Brothers” with the most recent being “Algorithm”. Luques was also part of Brian Lynch’s Grammy-winning CD “Simpatico” and his Grammy-nominated “Madera Latino” as well as Christian Scott’s Grammy-nominated CD “Rewind That”. He also produced Grammy-nominated “Entre Colegas” by Andy Gonzalez. You can hear him on Eddie Palmieri’s “Sabiduria” and “Mi Luz Mayor”; Gary Burton’s “Next Generations”; Dave Valentin’s “Come Fly With Me”; Sean Jones’ “Im*Pro*Vise”,” Roots”,” Kaleidoscope”, and “The Search Within”; Orrin Evans’ CD “Faith In Action”. As a sideman, Luques Curtis has participated in over 100 recordings.

Donald Edwards has played across the globe with some of the finest musicians in jazz and other genres. He has now built a reputation all his own.

After winning the Louisiana Arts Ambassador’s Award in 1994 for Music Composition, Donald Edwards became one of the most sought-after drummers on the Baton Rouge/New Orleans music scene. He grew up playing different kinds of music ranging from marching band, hip-hop, and pop to r&b, jazz, funk and gospel music. As a result, Edwards is now called on to play many different genres of music and meets them with creative interpretation and virtuosity. Donald Edwards is among the vanguard of players on the New York scene today.

As part of a production team conceived in 2005, with a full-service recording and music production studio, Dirty Soap Ent. LLC (Donald Edwards w/ Antonio Dyre) has worked with top artists in the jazz field and beyond. 2013 saw them relocate to The Samurai Hotel Recording Studio in Astoria to team up with master engineer Dave Stoller.

Edwards has 4 recordings as a leader -“In The Vernacular” (Leaning House Label), “Ducktones” (Zoot – T Label), “Evolution Of An Influenced Mind”- (Criss Cross Label) and “Prelude To Real Life”- (Criss Cross) and is also involved in the production of numerous recording projects.

With skills steeped in and out of the rich and varied traditions of Louisiana, drummer and composer Donald Edwards is dedicated to his pursuit of creative improvisation, compositional development, and experimentation with rhythms through conversing in dialects of a universal language we call music.

Get Subscription or Individual Tickets Now

Information on how to purchase individual tickets or an Art of Jazz Series subscription can be found at this link: Art of Jazz – Amina Figarova