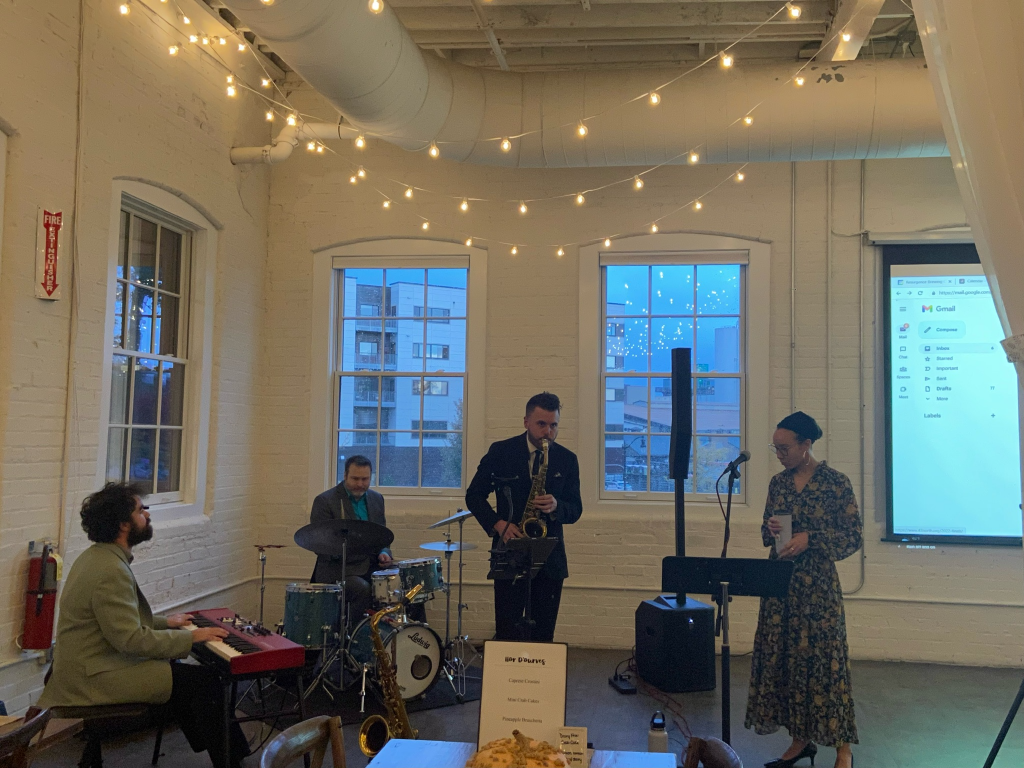 Since planting a seed in 2014 to position Buffalo as a start-up destination, 43North welcomes burgeoning and newly formed companies to take part in a yearly start-up competition. The annual competition culminates with “Finals Week” where 43North awards, via a judge’s panel, $1 million each to 5 winners. Previous winners include ACV Auction and Top Seedz.

The high-stakes week involves 15 finalists “pitching” their stories to judges in semi-finals and finals events. Their pitch also makes a case for their commitment to move to Buffalo as a base for growing their company. The finals event will be held at Shea’s on Thursday, October 20th, and is open to the public.

Last night, JazzBuffalo once again participated as a community partner in the 43North Kickoff and Welcoming Event. Providing music and entertainment for the 15 finalists, judges, and invited guests who help support and sponsor the highly anticipated “Finals Week.”

Throughout the week, the 43North competition is designed to showcase the best of Buffalo. In that spirit, JazzBuffalo showcased some of the best of our next-generation jazz musicians at the welcoming event. Performing as the John Troy Quartet, the music performances featured John Troy on multi-reed instruments, Hary Graser on keyboard/organ, and Ryan Cavan on drums as well as Alex McArthur – the 2021 JazzBuffalo Poll Winner for Female Jazz Vocalist of the Year.

Perform they did! To the delight of the guests in attendance. Noticeably, several of the out-of-town guests were jazz fans. Including a jazz guitarist from Los Angeles, a Chicago jazz fan sharing stories about the legendary Green Mill jazz club, and one who requested “Giant Steps” by John Coltrane! You can tell that some had done their research and were well aware of the JazzBuffalo.org platform. Just in case they win and move to Buffalo!

Colleen Heidinger, President of 43North, provided fabulous opening “Finals Week” remarks. Centering on what the competition not only means to finalists but also what it means to the city of Buffalo. And, essentially how the competition represents the new future of Buffalo.

The welcoming event and “Finals Week” represent the new vibrancy happening in our business community as well as in our jazz community. Both communities provide opportunities for the next generation to build a better and brighter future for Buffalo. Much kudos to the people of 43North for creating a unique enterprise now sought-after by many start-ups throughout the country.

John Troy produced videos that helped captured the vibe of a special welcoming event. Check them out below.

Video captures the band in performance.

Video captures the vibrancy of the fantastic welcoming event.