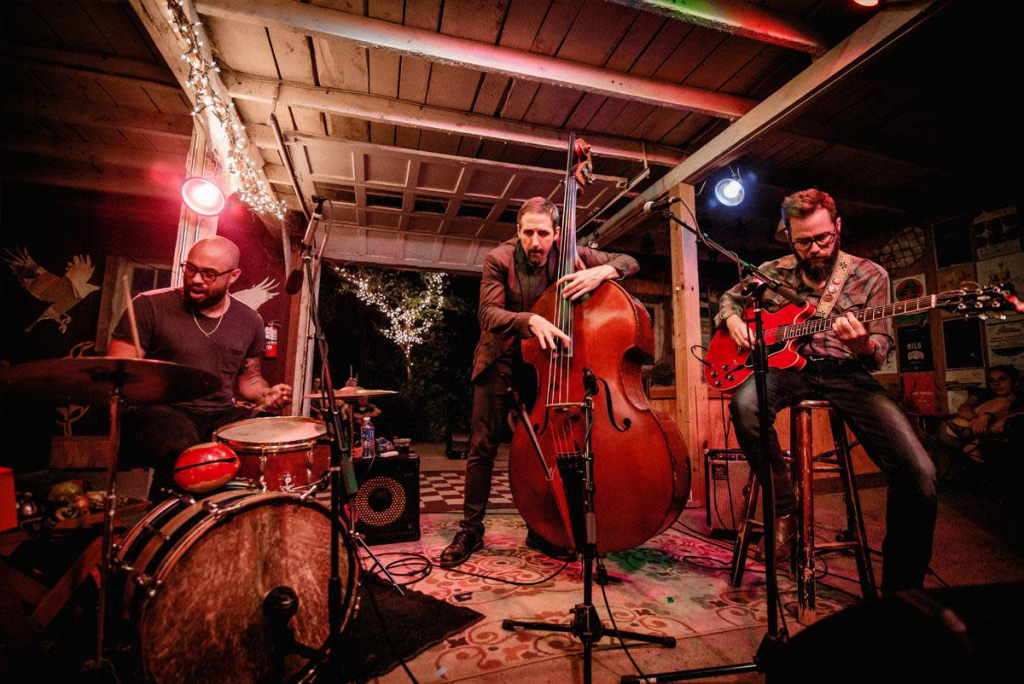 The creative Chicago trio, the Joe Policastro Trio, honed its chops playing three times a week at a storied downtown room, Pops For Champagne, where bassist/leader/arranger/composer Policastro, guitarist Dave Miller and drummer Mikel Avery worked out on diverse material like the James Bond Goldfinger theme, and pop hits by The Animals, Lou Reed, BeeGees, The Police, Beatles, Springsteen and more.

Hailed by Downbeat for its “deft analysis of choice repertoire,” and by the Chicago Reader for its “diversity of approaches to all kinds of source material,” the Je Policastro Trio is a forward-thinking, Chicago-based jazz trio led by bassist/composer/arranger Joe Policastro. While firmly rooted in jazz, the band’s open-minded, inclusive nature draws upon a wide array of musical styles and sources while still keeping the aesthetic of an acoustic trio intact.

“Sounds Unheard 2012-2022” marks the fifth release by the band and is an assemblage of new recordings, outtakes, and unreleased material documenting the life of the trio. The nine covers and one original boast an elegance and attention to detail that makes familiar melodies come to the fore with daring and a definite sense of adventurism. Their last album, “Nothing Here Belongs” (2019), focused on the band’s captivating body of original music, whereas previous albums, “West Side Story Suite” (2013), “POPS!” (2016), and “Screen Sounds” (2017), highlighted the trio’s ability to remake unlikely songs in its own raw, highly idiosyncratic fashion.

“Their deep understanding of each other and deft analysis of choice repertoire repays repeat and close listening.” (Michael Jackson, Downbeat)

Tickets are available at Eventbrite with a special Eary Bird Discount still in effect. Final ticket price will on be $10. Go to this link below to get tickets now for with the promo code already built in!

Or, use the check out below by first clicking the hyperlinked “Enter Promo Code” (just above the word Tickets) and enter promo code EaryBird10 to get $10 off.