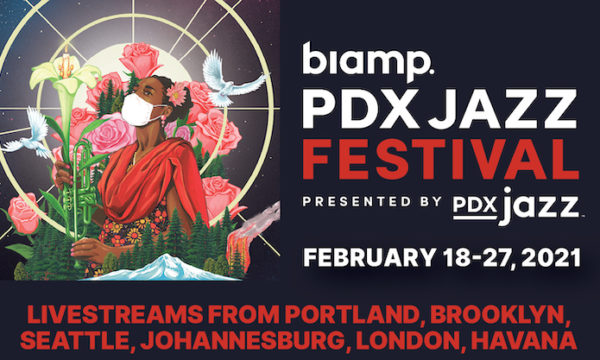 Welcome to the 2021 Biamp PDX Jazz Festival — Livestreaming from Portland, Havana, London, Johannesburg and Brooklyn this year and

Celebrating jazz music and culture in Portland for 18 consecutive years! Festival highlights, artist descriptions, venue and ticket information can be found by clicking through each link above. PDX Jazz has crafted a festival that is as unique as Portland itself for the 18th consecutive edition of the annual event, featuring ‘live’ performances and ‘live’ real-time web streams from Portland, Oregon each day, flanked by exclusive international engagements from around the globe.

The Festival kicks off on Thursday, February 18 with a FREE PDX Jazz Members only Livestream of the Opening Night Celebration featuring Thomas Lauderdale and China Forbes of Pink Martini  from the Biamp World Headquarters.

Ticketed shows commence on Friday, February 19 with Harold López-Nussa “Live in Havana, Cuba”, and Cyrus Nabipoor at Jack London Revue performing his debut album “Live at the Marigny Opera House”, which was recorded in New Orleans. The GRAMMY® award-winning Prince protégé and powerhouse vocalist, Judith Hill, arrives from Los Angeles to take the stage Saturday February 20, sharing the electrifying voice that has landed her on tours with Michael Jackson, Josh Groban and John Legend. Portland’s dynamic vocalists Saeeda Wright, Alonzo Chadwick and Arietta Ward bring a fiery Gospel-inspired performance to the Festival on Sunday, the 20th.

Wayne Horvitz’ The Royal We closes out the Festival on Saturday, February 27 “live in Seattle’s Royal Room”.

International and National web streams woven into the Portland based programming throughout the week include
INDABA IS Weekender Friday February 26 & Saturday 27 in partnership with Joburg Theatres & Ndelela Music, featuring an All-star lineup of South Africa’s blooming jazz scene Thandi Ntuli Sextet, Sibusile Xaba, The Brother Moves On, The Ancestors’ feat. Nduduzo Makhathini and Mandla Mlangeni plus Talks /Workshops with many of the artists “Live in Johannesburg, South Africa”

Chris Doss, PDX Jazz Executive Director states “the team at PDX Jazz is committed to serving the jazz community with exceptional one-of-a-kind entertainment experiences. PDX Jazz has bolstered the virtual experience and enabled online access to Festival performances for as little as $5 per show; in addition to launching a new online membership level that starts at $50 annually, which allows Members to watch every Festival show for FREE. Shows will be available to view for 48 hours and films will be available to view for 72 hours, allowing patrons from around the world to enjoy the 2021 Biamp PDX Jazz Festival to its fullest.”