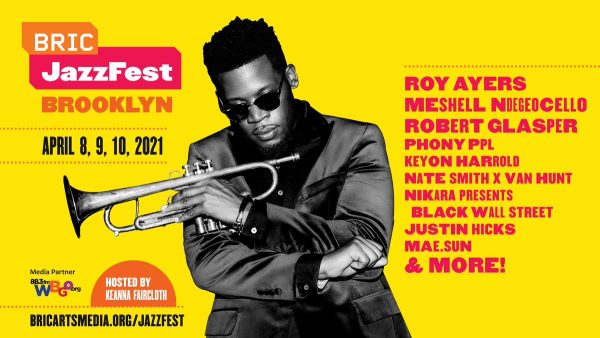 Vibraphonist/vocalist Roy
Ayers is among the best-known, most-loved and respected jazz/R&B artists on the music-scene today. Now in his fourth decade in the music business, Ayers, known as the Godfather of Neo-soul, continues to bridge the gap between generations of music lovers. In the ’60s he was an award-winning jazz vibraphonist, and transformed into a popular R&B bandleader in the ’70s/’80s. Today, the dynamic music man is an iconic figure still in great demand and whose music has been sampled by music industry heavyweights, including Mary J. Blige, Erykah Badu, 50 Cent, A Tribe Called Quest, Tupac, and Ice Cube. Ayers recently recorded with hip-hop artist Talib Kweli (produced by Kanye West) and jazz/R&B singer Will Downing. Many of Ayers’ songs including “Everybody Loves the Sunshine,”, “Searchin”, “Running Away” have been frequently sampled and remixed by DJ’s worldwide.

Phony Ppl is a mix of people, time, and sound that’s been nurtured over generations in Brooklyn. They were a group of kids who started making music together during after school sessions in the homes of their creative families, and who grew up to cultivate a sound that’s as much punk as it is soul. A quintet of live music blending acoustic instrumentation with electronic inputs and different vocal styles, their DIY sound is a mix of soul, R&B, funk, hip hop, jazz, pop, and everything between and beyond.

Born and raised in Brooklyn, Nikara Warren describes herself as being ‘bathed’ in music and the arts since birth. As the product of a musical family, Nikara’s sound is a direct reflection of her family’s jazz, hip-hop and dancehall roots. It’s only natural that Nikara makes ‘rump-shaker’ music with an emphasis on dancing. Nikara’s premiere project, Black Wall Street, is a set of feel-good tracks designed as an ode to Black Excellence to counteract the emotional trauma caused by news headings of Black men and women being slain by police. Nikara draws from many forms of Black music and brings awareness to the Black Wall Street massacre of 1921 while remaining positive about the future and emphasizing the positive effects of diversity in the arts.

Meshell Ndegeocello is a ten-time GRAMMY Award-nominated singer-songwriter, bassist, rapper, and activist. Meshell first stepped into the spotlight in the early 90s and quickly took a seat next to some of music’s biggest names including John Mellencamp, Madonna, Rolling Stones, and Herbie Hancock. Shining just as much as a bassist as she does as a lead singer, her musicality has never been limited by scope or genre. Her fluid style seamlessly blends elements of funk, soul, jazz, hip hop, and rock into a powerful, soulful sound. Nearly three decades and twelve albums later, Meshell remains a main player on the music scene. Her last album Ventriloquisim (2018)—a cover album looking at R&B songs from the 80s and 90s—prompted NPR Music to state, “Ndegeocello breathes old soul into a collection of post-soul classics and elevates them to their rightful place in the pantheon.” This will be her second appearance at BRIC JazzFest and her first time as co-curator of the festival.

Keyon Harrold is a GRAMMY-winning trumpeter, vocalist, songwriter, and producer. Keyon is a versatile musician whose resume includes working with a who’s who of the music industry–Common, Snoop Dogg, Jay Z, Beyonce, Nas, Maxwell, Erykah Badu, Gary Clark Jr., Robert Glasper, and Keith Richards, to name a few. Harrold was born and raised in Ferguson, MO, the St. Louis suburb that tore into America’s national consciousness in 2014 with the police shooting of Michael Brown and the bitter protests and riots that followed. While Ferguson looms large in Harrold’s latest album The Mugician, it examines our troubled times through a far wider lens than any one tragedy. Keyon is passionate about the many injustices in the US and his music is an expression of that.

Justin Hicks (creator/performer) is a multidisciplinary artist and vocalist whose work has been featured at Lincoln Center for the Performing Arts, Performance Space New York, The Public Theater, JACK, The Whitney Museum of American Art, The Highline, and The Institute for Contemporary Art (Philadelphia), Baryshnikov Arts Center among many others. Hicks has collaborated with notable visual artists, musicians, and theater-makers including Abigail DeVille, Kaneza Schaal, Cauleen Smith, Helga Davis, Charlotte Brathwaite, Steffani Jemison, Meshell Ndegeocello and is a founding member of the vocal performance group The HawtPlates. In 2018, he was nominated for a Drama Desk Award for his work as the composer of Mlima’s Tale by Lynn Nottage (The Public Theater, dir. Jo Bonney). Hicks was born in Cincinnati, OH, raised in Lafayette, IN, and is based in the Bronx, NY.

Robert Glasper is the leader of a new sonic paradigm with a career that bridges musical and artistic genres. To date, he boasts 3 Grammy wins and 8 nominations across 6 categories, and an Emmy Award for his song for Ava Duvernay’s critically hailed documentary “13th” with Common and Karriem Riggins. Evolution is his hallmark. Glasper’s breakout crossover album Black Radio changed the face of the genre and set a new expectation for what popular music could be. The album won him the Grammy for best R&B album and established him as the musician of choice for some of the world’s most iconic artists; notably playing keys throughout Kendrick Lamar’s To Pimp A Butterfly, winning another Grammy for the elastic track “These Walls.” The ongoing Black Radio series has since become Glasper’s calling card, upholding a place at the heart of a trailblazing community: from long-time sonic brothers Mos Def and Bilal, to legends including Ledisi, Lupe Fiasco, Kanye West, Jill Scott, and Erykah Badu.

Van Hunt hails from Dayton OH. After moving to Atlanta in the late 90’s, he wrote hits for many artists, including Dionne Farris’ timeless “hopeless” from the Love Jones motion picture soundtrack. In 2004 Van released his eponymous debut album, and received a Grammy nomination for his breakthrough single “Dust.” He would go on to win the Best R+B Performance Duo/Group Grammy in 2006 for his version of Sly Stone’s “A Family Affair” performed with John Legend and Joss Stone.

Nate Smith hails from Chesapeake VA. In 2001, Nate moved to New York and became one of the key pieces in reinvigorating the jazz scene for nearly two decades, playing with esteemed jazz leaders such as Dave Holland, Chris Potter, Pat Metheny, Ravi Coltrane. He released his bandleader debut KINFOLK: Postcards From Everywhere in 2017 and received two composer/arranger GRAMMY nominations for the ballad “Home Free (for Peter Joe).” Since then he has collaborated with a number of pop/rock creators, most notably appearing on Brittany Howard’s GRAMMY-nominated solo debut album JAIME in 2019.

The concept behind the project, as described by the creators, is “Muddy Waters meets Max Roach”. There’s a raw, deep-rooted bluesiness in Van’s voice and musicianship, combined with an earthy, dynamic sheet of sounds and colors in Nate’s drumming. Van’s melodic and lyrical approach feel personal and intimate, and Nate’s drumming and rhythmic sensibilities feel ethereal and ancient. The result is a unique and stunning distillation of black musical mastery.

MAE.SUN, alternately known as Hailey Niswanger, is a multi-instrumentalist, vocalist and composer. In 2016, Niswanger started branching out from her jazz roots, and through meditation, began to channel music that was inspired by a multitude of influences and sounds. MAE.SUN’s music is mindful and eclectic, pushing boundaries and defying genres. Her music taps into the collective consciousness, serving as an engaging mediation for all. Though she can be primarily heard playing her saxophones and flute, MAE.SUN also plays clarinet, piano, and guitar. MAE.SUN’s cosmic debut album Vol. 1: Inter-be was released in 2017, followed by Vol. 2: Into The Flow in 2019.

Ticketing is based on the honor system. We encourage you to purchase based on the number of viewers in your household. Your purchase will help build Brooklyn’s creative future.

We are grateful for everyone that has kept us going through this pandemic. If you are an essential worker (healthcare or restaurant worker, delivery driver, first responder, etc…) or are experiencing hardship, please enjoy this discount as a small token of our appreciation.