“Led by the drummer and composer Francisco Mora-Catlett—the son of the Mexican painter Francisco Mora and the African-American sculptor Elizabeth Catlett—AfroHORN seeks a mystical but earthy vision of rhythm and folklore, inspired not only by Afro-Cuban music but also the Sun Ra Arkestra, in which Mr. Mora-Catlett played in the 1970s…” — NY Times

The metaphor at the center of Henry Dumas’ short story “Will the Circle Be Unbroken” is the Afro Horn, an instrument so mythically potent that it simultaneously unites and empowers the African diaspora through the sounds of jazz. Francisco Mora-Catlett and his New York-based jazz ensemble, AfroHORN, draws from the metaphor of the Afro Horn, an imperative to explore, intone, and celebrate African cultures and their expressive, artistic, and political possibilities.

Avant-garde cries of pleasure-pain, moments of soulful introspection, and densely interlocking rhythms all come together, illustrating the unity of African expression central to Mora-Catlett’s ideology. In the 1960s, Dumas was stimulated by conversations taking place around blackness within the Harlem-based Black Arts Movement. Although he was influenced by artistic figures including Amiri Baraka and Sonia Sanchez—Dumas was particularly inspired by Sun Ra. At its heart, the movement was about reclaiming blackness; about wresting it from the margins and placing it front-and-center. No apologies. No qualifications.

Mora-Catlett was born to an African American mother and a Mexican father. His parents, Elizabeth Catlett and Francisco Mora, were both prominent artists. Mora-Catlett first encountered Dumas’ writings during his time with Sun Ra’s Arkestra in the 1970s.

For this AfroHorn jazz performance Mora-Catlett brings together: Aruan Ortiz on piano, Alex Harding on baritone saxophone, and tenor saxophonist JD Allen. Mora-Catlett, himself on drums, is augmented by the master Afro-Cuban percussionist Roman Diaz. Together, they explored the musical connections between the Caribbean, America, Africa, and Latin America – highlighting moments of congruency between each other. Mora-Catlett’s project is a musical metaphor for the middle passage: a nexus, a site of negotiation, a place that unites the diaspora through a shared experience of in-between-ness.

Lovers of world music have some new recordings to sample from eclectic percussionist composer Francisco Mora-Catlett and AfroHorn on “Rare Metal.” AfroHorn is the band conceived by Mora-Catlett, born of Mexican and African-American parentage, “in Sun Ra’s home, during tenure with the Arkestra in the late 1970s.” Fittingly, this descendant recording of the influence of the visionary pioneer Sun Ra is a wide-ranging journey of sound that connects “avant-garde jazz to Cuban folklore, African mysticism and Latin American surrealism. 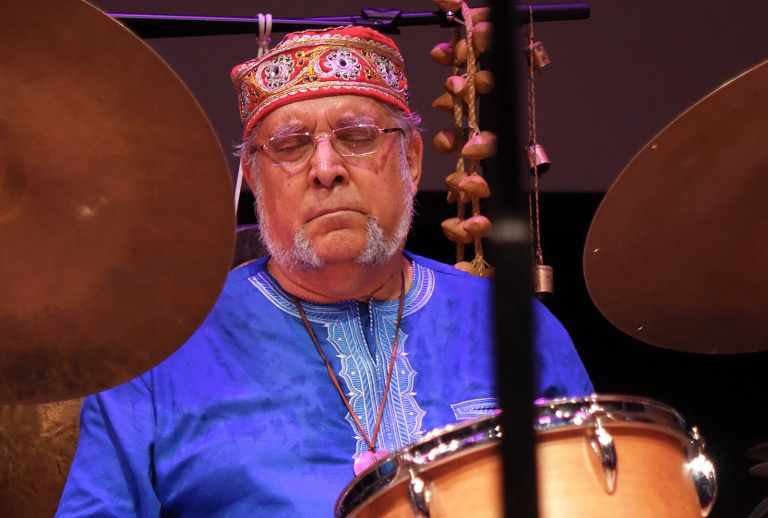