Bird with Strings with Vincent Herring conducted by Justin DiCioccio 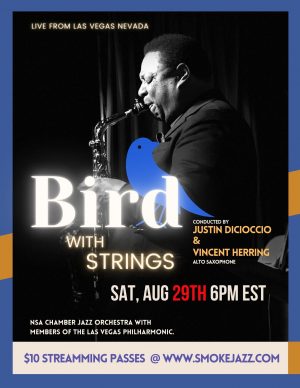 Join The School of Jazz at The Nevada School of the Arts as we proudly present a celebration of Charlie Parker’s 100th birthday, on the day itself presenting “Bird with Strings” featuring Vincent Herring and Justin DiCioccio

Nevada School of the Arts (NSA), a non-profit community-based music education school serving Las Vegas and Southern Nevada, is paying tribute to American Jazz “Be-Bop” pioneer Charlie Parker and presenting a dinner & entertainment of the legendary “Bird With Strings” recordings, at The “VEGAS” Room in the historical Commercial Center of Las Vegas. The event is scheduled to take place on Saturday, August 29, 2020, which would have been Charlie Parker’s 100th birthday.

Alto Saxophonist Charlie “Bird” Parker was instrumental in changing the face of music when he hit New York in the 1940s. One of Bird’s dreams was to record with a string section, which was realized through “Bird With Strings.” These studio sessions joined the forces of Classical and Jazz communities, creating

Symphonic Jazz and broadening jazz trends in the 1950s and onward, mixing things up instrumentally and stylistically. Led by internationally recognized music director Justin DiCioccio, these legendary orchestral recordings of Charlie “Bird” Parker will be brought to life by guest soloist and Alto Saxophonist Vincent Herring, who will be accompanied by NSA “School of JAZZ@NSA” faculty, Las Vegas Philharmonic musicians and NSA students.

“Charlie Parker was one of the most important figures in the development of modern jazz and in particular Be-Bop. As Las Vegas is known for a place of budding jazz musicians, we are thrilled and honored to be bringing this 100th Birthday honor to the Las Vegas community during these tough times at The “VEGAS” Room,” shares Patrick Duffy, President & CEO of Nevada School of the Arts. “The fact that Alto Saxophonist “Vincent Herring” and “Justin DiCioccio” will transport this important and historical piece of music in Las Vegas is a true JAZZ happening of record”.