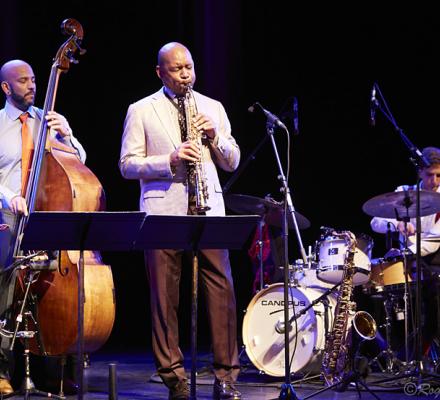 Grammy Award-winning, New Orleans-born Branford Marsalis has stayed the course. From his early acclaim as a saxophonist bringing new energy and new audiences to the jazz art, he has refined and expanded his talents and his horizons as a musician, composer, bandleader, and educator – a 21st century mainstay of artistic excellence. It is no secret that the Branford Marsalis Quartet can be as freewheeling off the bandstand as in performance. Saxophonist Marsalis, pianist Joey Calderazzo, bassist Eric Revis, and drummer Justin Faulkner are each bold personalities with strong opinions, equally intense in musical exchanges.

Marsalis is, as the Los Angeles Times dubbed him, “the highest echelon of jazz tenor saxophonists.” As the eldest musical sibling in jazz’s most famous contemporary clan, he parlayed his formative experiences in Art Blakey’s Jazz Messengers and his brother Wynton’s band into simultaneous careers as a performer, educator, composer, label owner, and bandleader with nearly 30 albums to his name. An uncompromising artist and three-time Grammy Award winner, Marsalis’s insatiable desire to expand horizons has found him performing with the New York Philharmonic, embracing hip hop influences with his Buckshot LaFonque project, leading the house band on The Tonight Show with Jay Leno, and working in the pop realm with Sting and Bruce Hornsby. But Marsalis is best known as the leader of this extraordinary quartet, a group that plays dauntingly intricate and breathtakingly dynamic music. A powerfully kinetic sound that entails navigating odd meters and eye-blink tempo shifts, it is an approach captured on the band’s new OKeh Records album, The Secret Between the Shadow and the Soul.

After the concert, enjoy a beverage and more music at the Postlude Performance.

BECOME A ROYAL SUBSCRIBER!
Choose any 4 or more concerts in the 2019.20 concert season to create your ideal subscription. You will get the best available seats PLUS discounted ticket prices AND enjoy Royal Subscriber benefits!