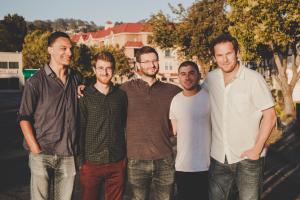 Dan Montgomery is an upright/electric bassist, vocalist, composer and educator based in New York City. He is originally from Rochester, New York, and spent several years in Miami, Florida, where he received his Bachelors Degree in Studio Music and Jazz Bass Performance from the University of Miami’s Frost School of Music, graduating Summa Cum Laude in May of 2015. Dan has performed in groups led by Ari Hoenig, Troy Roberts, Remy Le Boeuf, Martin Bejerano, Nicole Henry and Shelly Berg, and has also performed with Melvin Butler, Keith Ganz, The New York Voices, Rosanna Vitro, The Costa Rica National Symphony, John Fedchock, Nomar and Jose Negroni, Tal Cohen and many other artists as both a bassist and vocalist. Dan has performed at several major festivals and events, including the Newport Jazz Festival (2019), Telluride Jazz Festival (2013 and 2014), the JEN Conference (2014 and 2015), the Monterey Jazz Festival (2015) and the Tonica Jazz Festival in Guadalajara, Mexico (2015). Dan received the “Pathways to Jazz” Grant through the Boulder County Arts Alliance in July of 2019 to help fund his second album “Fly” (to be released in 2020). Dan also placed 3rd in the International Society of Bassists Jazz Competition in June of 2017, received the “Best Player” award at the Zilina Jazz Contest in Zilina, Slovakia in September of 2017, was admitted into both the prestigious Betty Carter “Jazz Ahead” Program and the BANFF International Workshop for Jazz and Creative Music in 2018, and most recently was chosen as a semi-finalist for the sixth annual UNISA International Strings Competition in Pretoria, South Africa in 2022. Dan is also a distinguished composer. His piece “Type A” was performed at both the 2015 JEN Conference and the 2015 Tonica Jazz Festival by the Frost Sextet, and was recognized by Downbeat as an “Outstanding Graduate Composition” that same year. This piece is the opening track of Dan’s debut album, “Storyteller” (available on CDBaby, iTunes, Amazon, Google Music and more). The album received a 4.5/5 star review from “All About Jazz,” and was heralded as “a brash, audacious offering of classic modern jazz.” This album primarily features Sam Priven on alto saxophone, Neil Carson on tenor saxophone, Jake Shapiro on piano and Evan Hyde on drums. This quintet was formed at University of Miami in 2016, and they have since toured extensively in Miami, the Midwest and San Francisco. Their latest release, “Emotional Machines: Live in San Francisco” (available on Bandcamp), features high-energy live recordings from their five night residency at the Black Cat Jazz Club in San Francisco from July 2019. After this residency, they went into the studio to record their second studio album “Fly”, which will be released in 2021. Dan is an active and passionate educator, as well. He has worked as a clinician at both the Tonica Jazz Festival (2015) and the University of Alaska Anchorage for their annual “Jazz Week” (2016). He was formerly the bass professor at the Community Arts Program, a music program for kids K-12 in Miami, Florida (2015-2018), and a voice and string class leader at the Miami Music Project (2015-2016). Dan also maintains a private studio; some of his private students have gone on to attend the Berklee College of Music, the University of Miami’s Frost School of Music, The New School for Jazz and Contemporary Music and other prestigious collegiate programs.