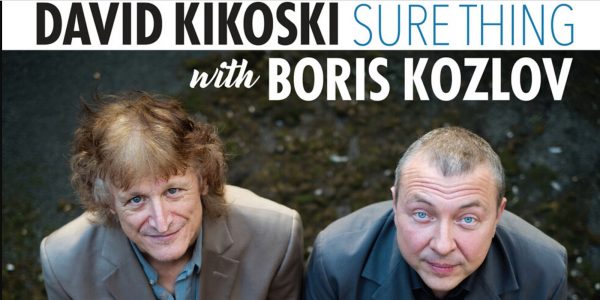 DAVID KIKOSKI & BORIS KOZLOV DUO – “SURE THING” CD RELEASE PARTY
David Kikoski is a pianist, composer, and arranger steeped in the great tradition of Jazz.
“The brilliant playing of David Kikoski just smokes. His playing is sparkling.” – Chick Corea
“Dave has so much feeling. He can play anything. I can depend on him for so much.” – Roy Haynes
A highly regarded jazz pianist, Dave Kikoski, emerged in New York jazz scene in 1980s and quickly established himself as a go-to performer working with top players like Roy Haynes, Bob Berg, Randy Brecker and many others. Kikoski is known for his adept post-bop style and spontaneous swinging performances.
As a leader, Kikoski has released 20 albums, including “Presage” with Eddie Gomez and Al Foster (1989), “Beatle Jazz” featuring Michael Brecker, John Scofield, and Mike Stern (2007), and “Consequence”s featuring Jeff “Tain” Watts and Christian McBride (2015). His newest album “Sure Thing,” a duo album with Boris Kozlov, was released under High Note Records on February 12th. The album has already received a 4-star review from The Times (UK).
As an invaluable go-to sideman, Kikoski recorded and toured with luminaries such as Roy Haynes, Michael Brecker, John Scofield, Ravi Coltrane, Chris Potter, Dave Holland, Roy Hargrove, Donny McCaslin, Mike Stern, Chick Corea, Kurt Rosenwinkel, Toots Thielemans, Tom Harrell, Marcus Miller, Pat Martino, Jack Dejohnette, Billy Hart and many others. He is also a longtime member of the Mingus Big Band, the co-leader of BeatleJazz, and a member of Opus Five.
Kikoski won a 2011 Grammy Award with the Mingus Big Band for the “Best Live Jazz Ensemble Album” for Live at the Jazz Standard. He also had a Grammy nomination with Roy Haynes for the album, Birds of a Feather: A tribute to Charlie Parker, in 2001.
BORIS KOZLOV
“Kozlov is one of the anchors of modern jazz” -Todd Barkan
“The sophistication and harmonic sense I wish I could have in my next live” -Anthony Jackson “Swung harder than anything else will this year” -Chicago Tribune
Moscow born, 3 times Grammy Award winning acoustic and electric bassist, composer and arranger, Boris Kozlov has been on New York and international jazz scenes for the past 35 years.
In addition to his own projects and co-leading OPUS 5, he has been serving as a Bassist, Arranger and Musical Director for Mingus Big Band, Mingus Dynasty and The Orchestra for 22 years.
Boris has also been a first-call bassist for important jazz acts such as Michael Brecker, John Blake , Ray Barretto’s ‘New World Spirit’, Lew Tabackin, David Kikoski, Alex Sipiagin, Jean -Michel Pilc, John DiMartino, The Manhattan Transfer and many others.
Kozlov’s playing and arranging is on 9 Grammy nominated albums plus the Grammy winning Eddie Palmieri’s ‘Simpatico’ (in addition to the other 160+ albums).
Having many of his big band scores published, Boris continues to serve as a Musical Director for all of the Mingus Dynasty projects, winning a Grammy in 2011 for “Live at The Jazz Standard” album, touring and recording extensively with multitude of different bands, as well as doing international work with his own bands and OPUS 5.
He also performs solo bass and teaches master classes around the world following the release of his acoustic solo album “Double Standard”.
Boris Kozlov Trio “Conversations At The Well” (Crisscross) came out in 2016. In 2019 Boris recorded on another Grammy winning album by Brian Lynch “The Omni-American Book Club”.
Among his endorsements are Fodera Guitars and Gallien-Krueger Amplifiers.
ABOUT THE DUO
David Kikoski and Boris Kozlov have played together extensively for over 20 years in the Mingus Big Band as well as Kikoski’s trio and quartet, and the all-star post bop cooperative Opus 5 with Seamus Blake, Alex Sipiagin, and Donald Edwards.
Source:: https://davekikoski.com
+ Google Calendar+ Add to iCalendar