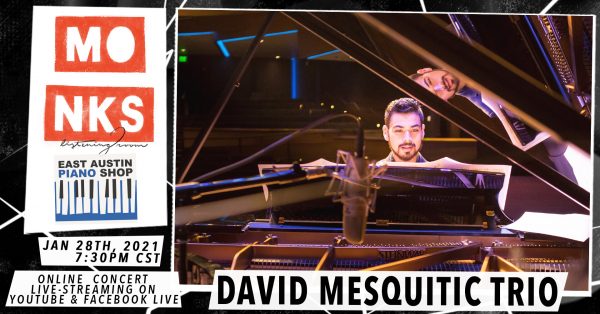 David Mesquitic is a pianist, educator, and researcher based out of Texas. David released his first trio album in the summer of 2019, Preamble, in which he features arrangements and originals that pay tribute to the Great American Songbook, and to whom he draws inspiration from such as Bill Evans, Oscar Peterson, Andy LaVerne, Keith Jarret, Robert Glasper, and current mentor Gerald Clayton. As an artist, David remains active in Central Texas and Colorado performing and arranging as leader and sideman in both jazz and commercial oriented projects. David has shared the stage with luminaries such as Dick Oats, Carmen Bradford, Andre Hayward, and James Morrison.

Mesquitic holds a M.M. in Jazz Performance from Texas State University and a B.M. in Music Education from UTRGV, and currently performs as a jazz pianist in the Texas and Colorado region. Mesquitic is currently finishing his doctorate degree in Jazz Studies at the University of Northern Colorado where he also holds a teacher assistantship. David recently performed at Jazz at Lincoln Center for the Jack Rudin Jazz Championship with UNC Lab 1 – 2020 Downbeat’s award-winning Large Jazz Ensemble category band. In addition to David’s academic career, his research interests include the history of jazz piano, improvisational techniques, the art of the piano trio, and the role of church music in jazz.

This performance channels the history of the piano trio, specifically with Nat ‘King’ Cole and the pianist whom he’s influenced along the way such as Oscar Peterson and Ahmad Jamal. Nat Cole set the foundation to the sound of the piano trio by going further and taking it to the point of consolidation. What was before an undefined and non-codified style became a model for small jazz ensembles that followed, specifically the jazz piano trio. Irving Mills, his agent who presented Duke as an artist every bit as much as an entertainer, promoted him as the balance in his works between the serious composer and the swing musician. In the same fashion, David’s goal is to shed light on Cole’s profound influence through his arrangements and performance.