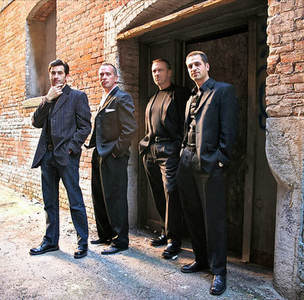 Syracuse’s favorite modern jazz group returns to Buffalo for a special performance at the Pausa Art House on Wadsworth St.  “For me, its always a real homecoming” says bassist and co-founder Matthew Vacanti, who grew up in Orchard Park.  “Probably the most important influences in my life happened here in Buffalo.  I took lessons from Bill Staebell. I went to see Bobby Militello and RPM as well as Spyrogyra at the old Tralf.  My father used to take me to see the jam session at the Cloister, and when I was old enough, I sat in with Joe Madison at the Blue Note.”
Now Vacanti has his own award-winning group.  Voted “Best in Syracuse” and touting three SAMMY awards for “Best Jazz Recording” E.S.P. has won pretty much every award in Central New York.   JAZZIZ magazine featured them on their sampler CD saying “E.S.P. is clearly inspired by the tradition of true jazz improvisation, yet glistens with a modern sound” and in 2011 they made a record with Grammy award-winning keyboardist Jeff Lorber.  Presently, they are touring around the northeast, promoting their latest recording “Zero Gravity”.  The line up features John Magnante on guitar, Evan DuChene on drums and Tony Greene on sax.