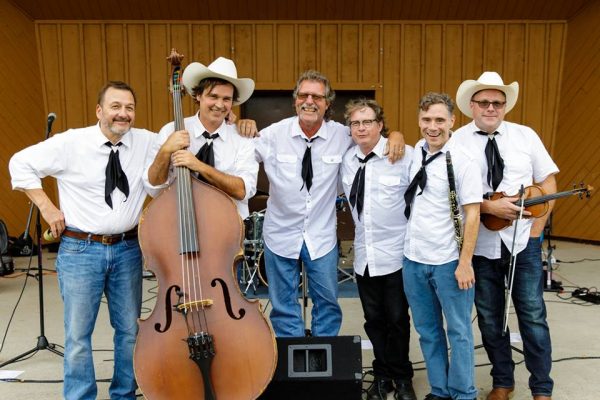 When you mix jazz, swing, blues, folk, and country together – you get the fabulous Skiffle Minstrels!

The Skiffle Minstrels is a Western Swing band based on the principle that music is for dancing and creating fun. Founded in 2003 on the idea that Skiffle music is for, of and by the people, the members search for and write music that engages an audience eager to be included and provides a rhythm and sound that excludes no one. Skiffle, often confused with jugband music is an urban form of folk music from the turn of the century New Orleans. It is an amalgam of jazz, blues, country, and folk. The Skiffle Minstrels focus on Western Swing as their genre since it is indebted to the same influences and is all about dancing and good times. The band covers the songs of Bob Wills, Hank Williams, Cindy Walker, Louis Jordan and writes original material in the same style. In 2015 the group released its third CD “Happy Hour.” The album was nominated by the Academy of Western Artists as Best Western Swing record of the year. The band also has two independently released CDs “Homespun” and “All God’s Children Gotta Dance” – the later produced by Grammy nominee Dwane Hall – owner of the legendary Sportsmen’s Tavern in Buffalo, NY where the band performs on the first Friday of every month. The Skiffle Minstrels have received several awards in categories ranging from Best Country Act to Best Genre-Defying Act.