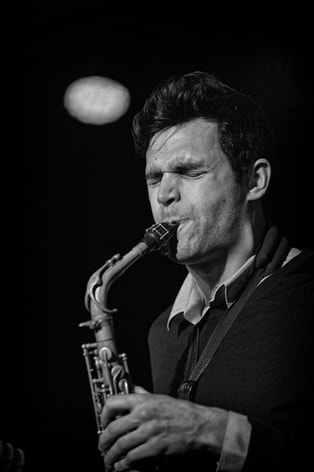 Elliot Scozzaro is a saxophonist and educator from Buffalo, NY. Elliot received a Master of Music in Jazz Studies at the University of North Texas, where he played lead alto saxophone in the seven time Grammy-nominated One O’ Clock Lab Band. As a member of the One O’ Clock, Elliot headlined the Generations in Jazz Festival in Mount Gambier, Australia, was featured as a soloist on Lab 2016, and performed with Dennis Mackrel, James Morrison, Danilo Perez, and Sean Jones. While at UNT, Elliot also served as a Teaching Fellow of Saxophone, directed the Five O’ Clock Lab Band, and studied under Brad Leali. Elliot was named a semi-finalist in the North American Saxophone Alliance Jazz Competition in 2016. Throughout 2018, Elliot played second alto saxophone in the renowned Glenn Miller Orchestra, directed by Nick Hilscher.