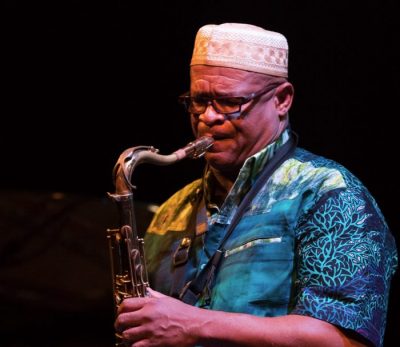 Presented by the Pappy Martin Legacy Jazz Collective.  The collective launches its’ first Celestial Jazz event at Lincoln Memorial United Methodist Church. We hope that you will join us on March 13 at 7 PM. Please invite your family and friends to support this fundraising effort for the Love Supreme School of Music.

As the leader of New Horizons Ensemble, Ernest Dawkins has performed music ranging from free bop to free form, occasionally displaying its links to the past while definitely looking ahead. Dawkins remembered hearing Anthony Braxton (a neighbor) practice as a youth. He originally played bass and then drums before settling on the saxophone in 1973. He attended the AACM school and studied music at the Vandercook College of Music and with the AACM “elders” (including Joseph Jarman and Chico Freeman). After playing with local ensembles (including the AACM Big Band, Ed Wilkerson’s Shadow Vignettes big band, and Douglas Ewart’s Clarinet Choir), in 1979 Dawkins formed New Horizons Ensemble which eventually grew into a pianoless sextet. His adventurous group (consisting in 1994 of Dawkins, trombonist Steve Berry, trumpeter Ameen Muhammad, guitarist Jeffery Parker, bassist Yosef Ben Israel, and drummer Reggie Nicholson) has performed regularly in Chicago, at festivals, and in Europe, in addition to making three recordings for the Silkheart label.