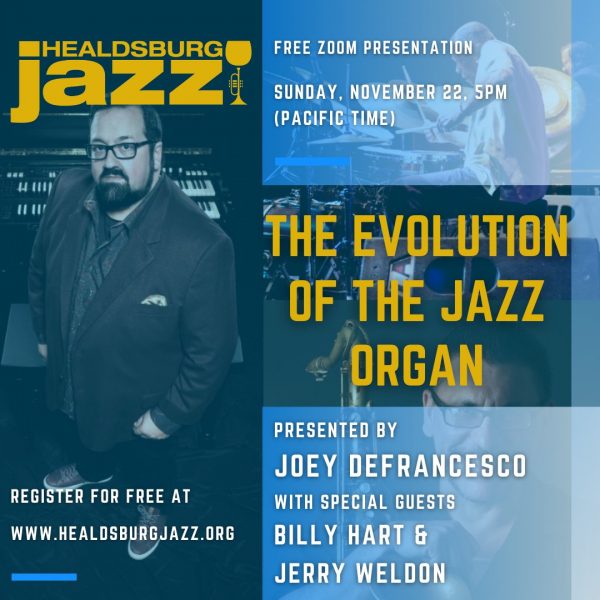 Our Zoom series, celebrating jazz history and culture,
is curated by Jessica Felix and hosted by Marcus Shelby

Donations will help this program continue!

Join world-renowned jazz organist Joey DeFrancesco live as he discusses his 30+ years on the jazz scene, sharing his musical experiences as well as an extensive look into “Jazz Organ”. The music, the musicians, it’s history and evolution. Guest artists will include drummer Billy Hart and tenor saxophonist Jerry Weldon. Both guests have performed and recorded with DeFrancesco and other master jazz organists over the years including Jack McDuff, Jimmy Smith, and Trudy Pitts, to name a few. This free virtual program is sure to be a fun and informative session for the real music enthusiast.

A prodigious talent, Joey was introduced to the jazz scene from the very young age of 4 years old. Joey and Billy Hart’s first recording, “Where Were You,” dates back to 1989. To date, Billy and Joey have shared the recording studio six times as a band member or featured artist. Two of Joey’s five Grammy nominations include Billy, Enjoy The View, on Blue Note Records, a leader recording that included Joey, Billy, Bobby Hutcherson, and David Sanborn. In the Key of the Universe, Joey’s latest release on Mack Avenue Records included Billy as well and earned Joey his fifth Grammy Nomination. Billy’s experience recording and performing include just about every Jazz Organist, Jimmy Smith, Larry Young, and Shirley Scott, to name a few.

Joey and Jerry Weldon have shared five recording sessions and the bandstand countless times over the years. Jerry’s history with Jazz Organists would include not just Joey but also greats like Jack McDuff, Trudy Pitts, Jimmy Smith, and some of today’s “on the scene” players.

All three musicians have an extensive history on the jazz scene, collectively performing or recording with just about every musician with a connection to the pioneers of jazz. Collectively, Joey, Billy, and Jerry have shared the stage countless times over their thirty-year friendship and shared love for the music.

Joey decided to invite both Billy and Jerry to join him for this zoom event to share their experiences performing together and their extensive music history with a specific focus on Organ Jazz.

“He has dominated the instrument and the field as no one of his generation has.” – Chicago Tribune.

“Mr. DeFrancesco is a deeply authoritative musician, a master of rhythmic pocket, and of the custom of stomping bass lines beneath chords and riffs.” – New York Times.

“DeFrancesco might be better known for his work in earthier jazz styles — he also teamed up with Van Morrison for 2018’s fun, bluesy You’re Driving Me Crazy — but he sounds right at home here.” – Rolling Stone.