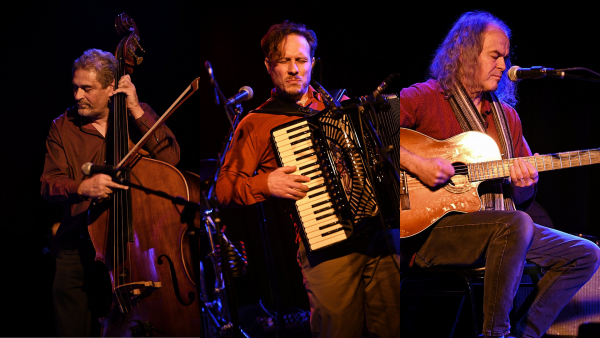 French ConéXion was formed in the summer of 2016 with the intention of creating high-quality music in a jazz format where musicians are able to take a composition and create a unique and new version at every performance. Inspiration for their unique sound comes from the music of French accordion great Richard Galliano and his new jazz musette compositions. Their repertoire also includes tunes by Erik Satie, Edith Piaf, Egberto Gismonti, Hermeto Pascoal, Sivuca, Astor Piazzolla, Django Reinhardt, and many others. The trio also plays standards from the American jazz repertoire. Including performing their own compositions and improvisations.

In April of 2019, French Conéxion released their first album of recordings under their name.

… Wonderful musical interaction… always surprising what the musicians do with the harmonies and melodies…. Virtuosity totally serves the expression….. Great to hear what is possible with the three instruments…. (Beatrice Pfeiffer, flutist, music teacher, pastor)

… Add to the impressive lists of artists that are keeping Jazz music alive in our area and beyond French ConéXion and their new self titled release…. Each musician brings his unique characteristics to the music with Kunz adding some impeccable picking, dancing bass lines from Cousins add to the joie de vivre while Spindler’s accordion adds an Old World European charm to the music. Highlights include three Spindler penned numbers “Ellis Tk 1”, “Jequie a JP” and “Ellis Tk 2”, the Kunz written album opener “Luisinho”, and covers of Django Reinhardt’s “Anouman”, Jacob Do Bandolim’s “Doce de Coco” and Charles Trenet’s “Menilmontant”. (Best of WNY)

…really like the vibe and musicality of you guys… (Randy Kramer, Executive Director MusicalFare Theatre)

Jeremy Spindler is an accordionist who grew up in France and Brazil. He often plays solo, with the group The French ConeXion and with the group Volver. He plays in a range of styles but is primarly influenced by Brazilian Forró music, in which the accordion is the principal voice for the many different different dances, and by Richard Galliano, the French master who brought back the musette into the jazz world with the NEW MUSETTE wave.

MARC COUSINS – Double Bass, U-bass
Paris born bassist, arranger. Marc started his musical studies in Brussels, Belgium. He received his Bachelor degree in Jazz Performance from Arizona State University and attended North Texas State University for graduate work in music. He has toured the US and Europe with a variety of musical groups and has lived in Orlando, Dallas and NYC. He currently resides in Buffalo, where he has performed with a variety of local ensembles such as the Buffalo Philharmonic Orchestra, the Salvatore Andolina group and many others.