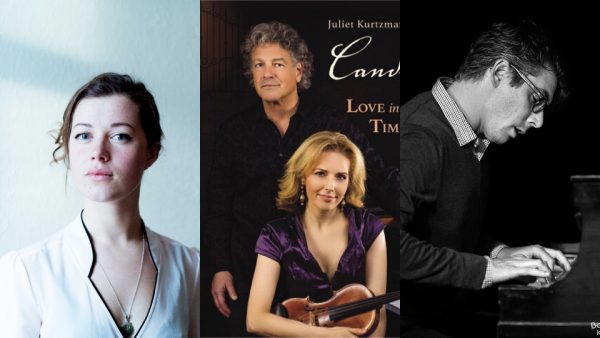 Concerts with some of the finest artists in Jazz today

Each concert will be 30 minutes (approx) and will be followed by a Q&A session with the performing artist(s).

The concerts will be live on Zoom. We have done all we can to achieve the best possible audio experience but we can only work within the bounds of the technology available at present. We advise using headphones.

Booking will close 30 minutes before the start of concert to allow time to process payments and send out the meeting ID and password. With the increased amount of traffic in cyberspace at this time some replies are being delayed. To ensure that you receive your meeting ID and password in time please book as far in advance as possible. The meeting ID will be sent to you approximately 1 hour before the concert starts.

Nel Begley is a rising star jazz vocalist and songwriter currently living in London and working and performing in the UK and Europe. She has performed at a large list of festivals including Manchester Jazz, Latitude, Bestival and Boom Town, and has appeared alongside Callum Au. She headlined at the Mas i Mas Festival Barcelona.

Her ever-growing love of music has led her around the world to pursue a passion to sing, and share her music making with an ever-growing audience.

Luke Fowler studied at the Western Australian Academy of Performing Arts (WAAPA) where he achieved his undergraduate degree.

After spending 2 years living and playing on the scene in Paris he moved to London where he opened the award winning venue “The Junction” and has recently achieved a masters at The Guildhall school of music.

He now hosts and performs with some of the best Jazz musicians in London.

Booking will close 30 minutes before the concert to allow time to process payments and send passwords.

Concert dedicated to the memory of Chick Correa

In 2006, Josh was one of only twelve semi-finalists in the prestigious Thelonious Monk International Jazz Piano Competition.

Original music and performances of Josh’s have appeared on various prime-time and cable shows and short films, including “Jack and Bobby”, “The Division”, and a national Johnson and Johnson commercial. He has also worked with film composer Michael Kamen, and actors Eric Idle, Clint Eastwood, and Jon Lovitz. Josh has earned many awards, scholarships, and accolades over the years, some of which include the Louis Armstrong Award and the John Philip Sousa Award.

“Josh is that rare young musician who has not only a wealth of study and experience under his belt (all but assuring him a prominent place in jazz music), but he also possesses those rarest of musical attributes: a touch, a tone, and a “sound” that are all identifiably his own.” – Peter Erskine, legendary drummer

Booking closes 30 minutes before the start of concert to allow time to process payments and send passwords.

Master Jazz pianist Pete Malinverni and virtuoso Classical violinist Juliet Kurtzman, perform music from their new CD release, “Candlelight – Love in the Time of Cholera”. This features a program of music as culturally wide-ranging as the diverse American hemisphere from which it is drawn, including tangos by Piazzolla and Gardel, a Joplin rag, the classic American ballad “Body and Soul”, a Brazilian choriño, and five lesser known pieces by the tragic genius, cornetist Bix Beiderbecke.

Already heard as a specially featured recording on the internationally heard PRX radio program, “Jazz After Hours”, the album was chosen as a special “Editor’s Pick” in Down Beat magazine and has been called, from among several glowing notices, “a luscious delight”, and, “a striking and emotionally infused album”. In a nod to the Gabriel Garcia-Marquez-inspired title of the recording, one writer recognised the significance of art that celebrates human connection during a time when we feel the need of intimacy more than ever, noting the arrival, in “Candlelight – Love in the Time of Cholera”, of a recording that “demonstrates the universality of music and the joy that it can bring as an elixir of hope to get us through these trying times”.

Booking will close 30 minutes before the concert to allow time to process payments and send passwords.