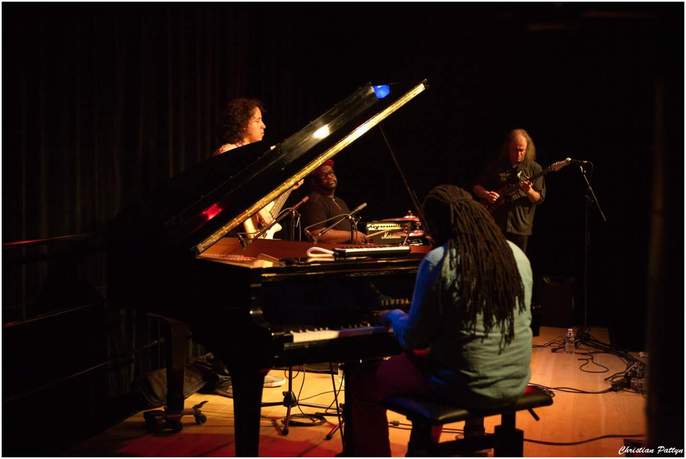 Grüvology is an award-winning jazz quartet from Buffalo in Western New York. Grüvology was founded in 2006 by pianist Walter Kemp and guitarist Bernard Kunz. Grüvology has published 3 CDs, First Set (2008), Unbridled (2010) and Freeway (2015). All our music consists of original compositions. Our compositions are influenced by gospel, blues, folk, Latin and middle eastern music. Our music is available on iTunes. Clips are also on our youtube channel and on our facebook page.

Grüvology has been named best Western New York Jazz Fusion group every year since 2012, including 2018. Fusion is to be understood in the sense of a seamless coalition of multiple Eastern and Western influences which may lead to all sorts of unforeseen surprises.
Walter Kemp was voted best keyboard player for 2012 and 13. Our bassist, James Benders, was named rising star in 2015 by the JazzBuffalo readers poll. Our drummer is the formidable improviser and multi-instrumentalist Ravi Padmanahba. Ravi has performed with many musicians including Robert Dick, Willam Parker, Peter Kowald, Pauline Oliveros, Daniel Carter, Adam Lane, Blaise Siwula, Steve Swell and Bern Nix.

Our Website is www.gruvology.com
Our Electronic Press Kit is at https://artistecard.com/gruvology
A link to our youtube channel is https://www.youtube.com/watch?v=yk6zfZmHvQU