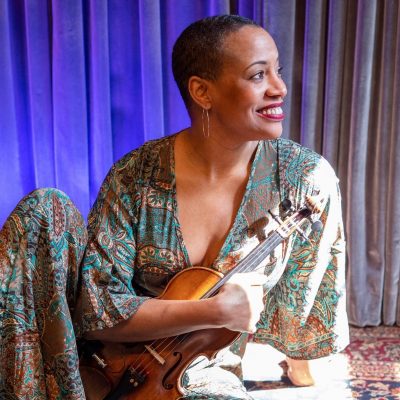 Violin music loops of Cuban melodies and rhythms are the highlight of this new project. What started as a hobby, out of curiosity and inspiration, became a source of pure joy and meditation. The possibilities are endless, the freedom and creativity just priceless. The repeating melodies of the bass, simple rhythms of clave, güiro, shaker or bells give way to infectious songs that will stay with you for a happy while.

As many of you followed, cheered and encourage me with this project, it is my absolute pleasure to bring it to you live. Havana Loops is honored to collaborate on this project with David Phillips on bongoes & cajón.

Be happy, there is music for your soul.

PAUSA’s owner, Cuban born Lázara Martinez began her violin studies in Havana Cuba at the age of 8. After receiving her Honor Diploma from the Amadeo Roldan Conservatory, she emigrated to the Dominican Republic where she was a member of the National Symphony in Santo Domingo. Three years later, she returned to Cuba to perform with the National Symphonic Orchestra of Cuba in Havana and as soloist & principal violinist with the Camerata Romeu.

She was also featured with the Camerata on National Radio of Spain, TV Madrid, Spain Radio Antena, Mexico Artes de Channel 22, and Cuba Vision / Radio Rebelde in Cuba. Before leaving Cuba to live in Mexico, Ms. Martínez recorded the debut CD “La Bella Cubana” with Camerata Romeu. While living in Mexico, she was a member of the Carlos Chavez Symphonic Orchestra, Orchestra of the State of Hidalgo, Camerata de las Americas, and the Minería Summer Festival Orchestra.

Lázara migrated to the States in 1998 and received a Bachelor’s degree in Media Production from SUNY at Buffalo – Summa Cum Laude – Phi Betta Kappa and a Masters Degree in Documentary production from the City College of New York. Lázara has been a member of the Slee Sinfonietta, a substitute violinist with the BPO, the co-founder of the String Quartet Boléo and member of the Afro-Cuban Jazz group “El Coco” with whom she recorded the self titled CD ” El Coco”, released in 2017. Lázara co- founded PAUSA art house in 2013. She is currently the sole owner and manager of all PAUSA business operations.