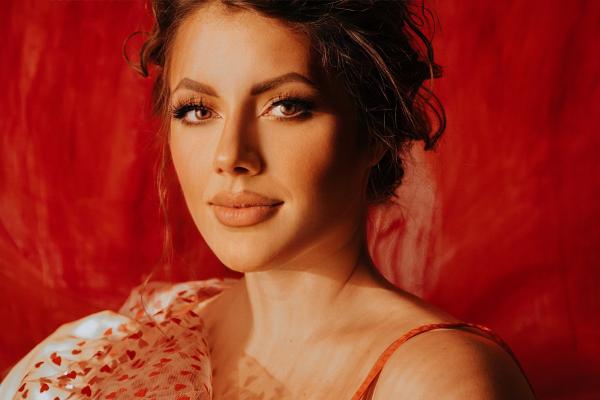 Sofija Knezevic aka Sofijazz is recognized as one jazz’ pre-eminent vocalist.  An award-winning jazz vocalist debuting some of her beautiful compositional work, skillful lyricism embraced by her rich velvety voice.

“Recognized as one of jazz’s pre-eminent vocalists, young Sofija Knezevic is making her name as one of the most significant singers in jazz today. While her singing is steeped in tradition, her improvisational virtuosity and creativity are breathtaking.” – New York Times

Sofija graduated from the University of Music and Performing Arts in Graz, Austria, in the class of Dena De Rose where she studied on a full-tuition scholarship at the age of 16.

​She’s been living in New York since 2011, and teaching voice at the Music School of New York City since 2012.

​Sofija is also an ambassador of ICAF (international child art foundation) , CYE (Celiac Youth of Europe), one of the ambassadors for the Estee Lauder Breast Awareness Campaign, and an Amazon Aid Foundation Artist.

Sofija is listed as first of Elle Magazine`s 30 under 30 (30 most successful people under 30 years of age), and number 3 on Cosmopolitan Magazine’s list of the most beautiful women.

Sofija is included in the Jazz Encyclopedia `Serbian jazz, Bre`, and has just published a book of her own “Evolution of Voice – The Art of Breathing” in 2019.

​Sofija organized and performed at many humanitarian events, including the support for the Sandy Hook victims in 2013.

Sofija has written and recorded music for numerous movies, including the documentary about her life, the movie ` Love Comes After `, ‘Our guardians/ a little homage’, and ` Balkan Spirit ` by Hermann Vaske where she appeared together with Marina Abramovic and Angelina Jolie.